In his second "Executive Decision" segment of Mad Money Tuesday night, Jim Cramer sat down with Marc Lore, president and CEO of Walmart's (WMT)  eCommerce US.

Lore said many people may not realize that Walmart has 4,700 locations and that the company's stores are within 10 miles of 90% of the U.S. population. Many of those locations now stock fresh and frozen foods, and Walmart can now profitably deliver those foods right to your door.

Lore added that Walmart stores are already profitable and have great gross margins. Adding delivery to reach even more customers only helps with inventory turnover. When asked about what's next, Lore said they're already working on conversational and voice ordering, as well as delivering food right into your refrigerator. (Memo to self to keep the kitchen looking neat.)

Let's take a look at the charts and indicators now that we listened to the fundamentals.

In this daily bar chart of WMT, below, we can see that prices have declined from a November high. WMT has filled a price gap or void from August and is testing the flat 200-day moving average line from above. The slope of the shorter 50-day average line is negative and the daily

On-Balance-Volume (OBV) line made a new low for the move down this month. The OBV line has been going down since February and that is a sign of weakness to me.

The trend-following Moving Average Convergence Divergence (MACD) oscillator moved below the zero line in November for an outright sell signal.

In this weekly bar chart of WMT, below, we lose the price gap but prices are still back to the upside breakout in August. WMT is testing the flat to slightly positive 40-week moving average line.

The weekly OBV line shows only a two month decline unlike the daily OBV line which has been weak all year.

The weekly MACD oscillator has just crossed to the downside for a take profits sell signal.

In this Point and Figure chart of WMT, below, we can see a downside price target in the $83 area which should be support. A break of support would open up the risk of further declines. 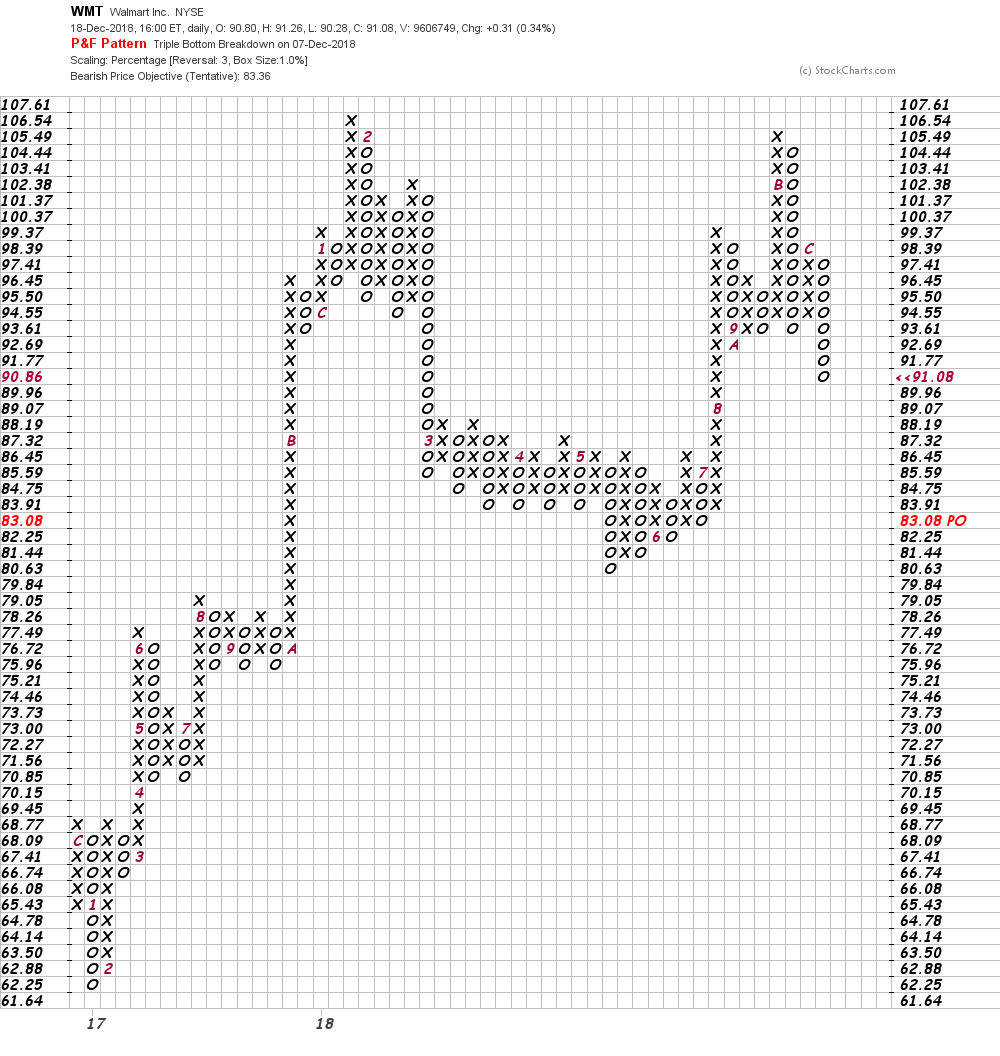 Bottom line strategy: WMT is pointed down but prices should find buyers (support) in the mid-to-low $80's.

Get an email alert each time I write an article for Real Money. Click the "+Follow" next to my byline to this article.
TAGS: Economy | Investing | Stocks | Technical Analysis | Trading | Retail | Consumer Products | Consumer Discretionary