On Thursday morning, Walmart (WMT) reported the firm's third quarter (fiscal 2020) financial performance. The performance looks exceedingly good, at least in spots. Don't get me wrong, I like Walmart, but I thought the immediate reaction was indeed overdone. I sold a few shares short in the pre-regular hours trading. I did not get the highs, but close enough, just for a trade. I do not want to be short this name long-term, and I certainly do not want to be short the name going into the holiday season. Let's dig in.

For fiscal Q3 2020, Walmart reported adjusted EPS of $1.16, which not only showed earnings growth of 7.4% from the same quarter one year ago, but beat consensus. Revenue printed at $127.991 billion, up 2.5%, but just a hair below expectation. Beneath the surface, there were a number of impressive metrics put on display.

U.S. same store sales popped 3.2%, slightly above consensus. Walmart seems to be getting more out of regular shoppers, as the average ticket increased by 1.9%. I have a question though. Why then did revenue grow just 2.5%? Ahh, growth on the international side has come more slowly, at just 1.3% this quarter. Sam's Club is also becoming something of a headache as well, sporting comparable sales of just 0.6%. Much more robust growth of 1.8% had been what the industry had been looking for from that quarter.

Back to the good stuff. E-commerce rocked. That line once again showed rather robust growth. 41% for the quarter, supported to a significant degree by the grocery business. Now for some more softness. Operating income dropped (-5.4%) to $4.7 billion, well short of industry expectations of an even $5 billion due to a non-cash impairment charge taken by the international business. If isolated, U.S. operating income grew 6.1%.

Now, we understand that the firm is in investment mode. The firm has been acquiring a number of brands meant to bolster the on-line business, as well as improve delivery times. As Amazon (AMZN) spends more and more on competing for Walmart's grocery business, and has gone so far as to promise certain Prime members two hour delivery, Walmart has had to expand delivery capabilities. This has pressured margin. Free Cash Flow for the quarter amounted to $6.8 billion, a very nice number, but that's down $3.5 billion from the same quarter a year ago.

After what Wall Street took as a very strong quarter, I kind of saw as mixed performance, but the firm did raise guidance for the full year. Walmart now expects adjusted earnings for the full fiscal year (2020) to "increase slightly" comparable to fiscal 2019. This is up from prior guidance of somewhere between a slight decrease to a slight increase. The firm does note that excluding the Flipkart business in India, full year earnings would be up high single digits in percentage terms. 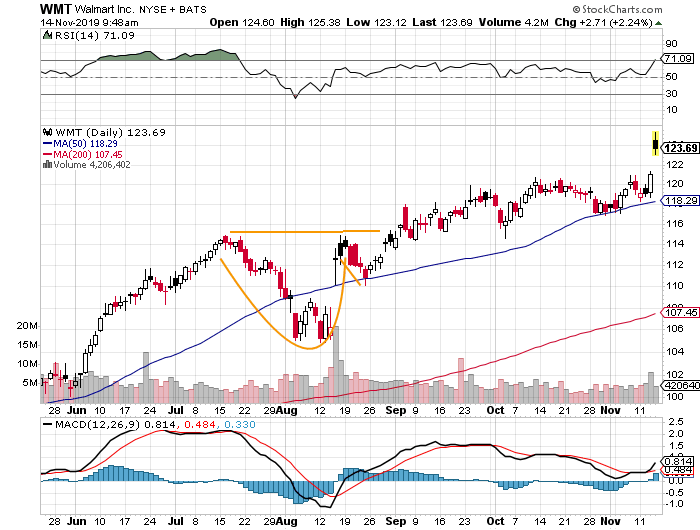 Readers will see this chart as an elongated break-out of a summer cup with handle pattern. Should this move still be intact, the target would probably be in the high $130's. But I think this is really just a smaller snapshot that is actually part of a much larger picture. 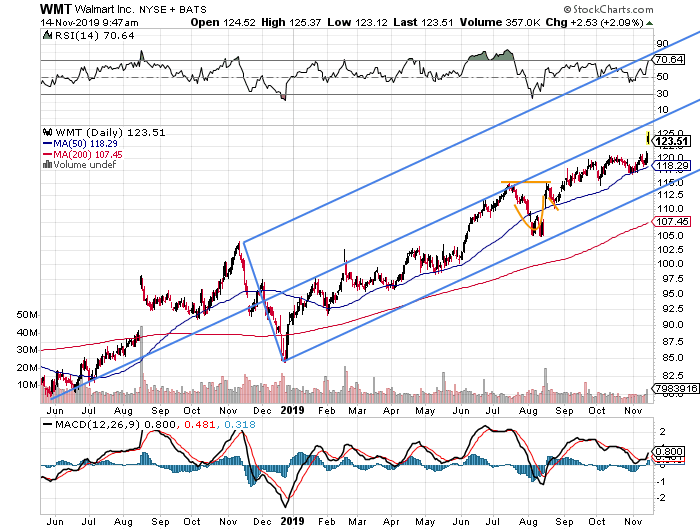 You'll note how insignificant that cup with handle becomes when the chart is zoomed out to 18 months. Suddenly the overriding pattern becomes a Pitchfork covering the entire chart. Hence, these shares have manged to color in between the lines quite well. Never straying above the Pitchfork's central trend line, and never moving below the lower trend line. If I am correct (and I don't know for sure that I am), then WMT opened this morning both near resistance, and technically overbought with a Relative Strength of greater than 70.