Sarge fave, well... I guess former Sarge fave Walmart (WMT) released the firm's fiscal first quarter financial results on Tuesday morning. Those results were nasty. Kind of made me feel like a fool. For the three month period ended on April 30th... Walmart posted adjusted EPS of $1.30 (GAAP EPS: $0.74) on revenue of $141.6B. The revenue print edged expectations and was good for year over year growth of 2.4%. The bottom line number missed by a country mile. Yes, I am going to do something I have rarely ever done, and speak (write) negatively on Walmart.

CEO Doug McMillan On The Quarter...

From the press release.. "Bottomline results were unexpected and reflect the unusual environment. US inflation levels, particularly in food and fuel, created more pressure on margin mix and operating costs than we expected. We're adjusting and will balance the needs of our customers for value with the need to deliver profit growth for our future."

Thinking out loud.... Unusual? "Unexpected?" Target (TGT) reports tomorrow morning. Costco (COST) reports next Thursday, May 26th. These two competitors had better tell a similar tale of woe and having been surprised by the environment. Yes, this environment is tough. If these two firms were better prepared, and did a better job of executing in that tough environment, we'll know who to blame.

Walmart ended the quarter with a net cash position of $11.817B, cut almost in half from one year ago. Much of this cash was spent on inventory building. Inventories stood at a value of $61.229B, bringing current assets up to $83.22B. Current liabilities totaled $96.53B as short term borrowings ballooned to $11.432B from just $410M three months ago. This leaves the firm with a current ratio of 0.86, which has been in decline sequentially for several quarters now, and in my book, is fairly awful. Ex-inventories (because inventories, especially out of season inventories rarely hold their value), and Walmart stands with a quick ratio of 0.23. This number actually makes me physically ill.

Total assets add up to $246.142B including $29.438B in "goodwill", while total liabilities less equity amount to $160.542B. This number includes $32.174B in long-term debt, the $11.432B in short-term debt mentioned above, and $13.226B in long-term lease obligations. I dare say that depending on how well the firm manages that oversized inventory could impact the firm's ability to meet short-term cash needs should the "unexpectedly tough" environment get "unexpectedly tougher."

No, Walmart's balance sheet does not pass the Sarge test. In fact, Walmart is not even close. I am embarrassed that I am long this name. 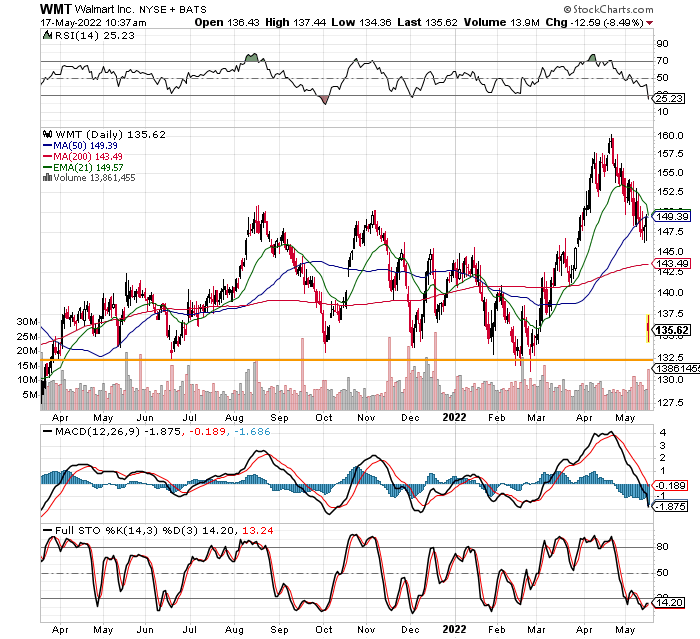 Walmart is technically oversold, and deservedly so based on the fundamentals. I don't think I need to tell investors how important the $132.50 level is. That orange line breaks and Walmart heads for the netherworld. Until then, the stock will be tradable. I am actually long more shares right now than I was early this morning. That's because I am trying to trade my way out of this.

Make no mistake, I am getting out of Walmart. Target trades at just 15 times forward looking earnings, and at least for right now, I have a high opinion of Brian Cornell. Costco is more expensive at 37 times, which makes it tough to purchase right now, but there should not be any questions regarding that firm's corporate execution. Probably moving at least some of the proceeds into those two stocks. A little going into, and a little coming out of earnings.

(WMT and COST are holdings in the Action Alerts PLUS member club. Want to be alerted before AAP buys or sells these stocks? Learn more now.)