This is not one of those pieces where the pundit exaggerates victories and forgets all about his or her defeats while the audience rolls their collective eyes. Sure Walmart (WMT) went to the tape wit some nice looking first quarter numbers this (Tuesday) morning. Sure the stock is acting well in the early going. Sure, I wrote a piece last Wednesday signalling my intention to get long the name ahead of earnings, which I did do. I had also wrote that day that should the shares pop post-earnings that I would likely be left with a trade. Had the shares shown weakness, my intention was to build a position. No, we do not bemoan any profit. That said, in my heart, I know this firm is really knocking the cover off of the ball. I would not have minded taking either fork in this road. Really.

For the quarter ended this April, which for Walmart is the first quarter of fiscal year 2021, the firm reported adjusted EPS of $1.18. This beat the Street by nine cents. Revenue generation landed at $134.62 billion. This number also beat expectations, and was good enough for year over year growth of 8.7%, far exceeding the pace of sales growth for this firm for any quarter in recent years. As impressive as the numbers are, these are not the numbers that has Wall Street so interested this morning. Let's explore.

Last week, I wrote about just how reliable I felt that both Walmart and Amazon (AMZN) had been throughout the crisis in New York. There are other retailers that we will make on-line or even in-store purchases from in this environment, but these two stood well above the competition in getting essentials to the consumer's door, and in being brutally honest when the purchase concerned products that were just not in stock anywhere nearby or would be delayed. I have been impressed. No doubt.

As for the stores, I don't know about them all, but the one near my home, was way ahead of the curve when it came to requiring employees and customers to wear masks, to placing plastic barriers in between cashiers and the consumer that they were dealing with, and to place one-way signs in the aisles, and to politely enforce these social distancing measures. In other words, they were excellent, at a time when people needed excellence.

It is small wonder that Walmart saw e-commerce sales soar an incredible 74% for the quarter. It is also quite notable that same-store sales ramped 10%, well above the 7.2% (which would have been great) that the analyst community was looking for. This was done as consumers, trying to limit exposure, made less physical trips to the retail locations. Comp total transactions decreased by 5.6%, but those trips produced an average ticket size that jumped 16.5%. In other words, folks loaded up when they went, because they did not want to go often.

The success of the firm's aggressive implementation of it's omni-channel strategy ahead of any inking of a public health crisis was put to the test, and proved the firm was almost perfectly positioned to maintain operations at a high level even under duress. There are two negatives that will have to be overlooked. For one, the firm pulled full year guidance as the future is understandably unpredictable at this time for almost one and all. The second would be some compression in gross margin, as the firm spent on the effort to meet the challenge presented.

Since mid-March, the firm has added a rough 200K associates across the stores, clubs such as Sam's Club, and distribution centers in order to help keep up with demand, and to provide an employment option to the individuals losing jobs elsewhere in the economy. In addition, Walmart increased hourly wages by close to $2 for warehouse workers, while expanding the employee benefits package. In all, including increased pay and bonuses, as well as cleaning and safety initiatives, expenses increased to nearly $900 million.

As the Walmart website has become exceedingly popular, drive by increased pick-up and delivery services for groceries, the firm has decided to discontinue the Jet branded website. Yes, the firm paid more than $3 billion for Jet back in 2016. While that may seem like a loss on the record books, the firm did use the Jet model to create the success that the Walmart branded website has become. I would be slow to see that deal in a negative light.

On the quarter, CEO Doug McMillan said, "Our omni-channel strategy, enabling customers to shop in seamless, flexible ways, is built for servicing the needs of customers during the crisis and in the future." CFO Brett Biggs added, "While the short-term environment will be challenging, we're positioned well for long-term success in an increasingly omni world." One thing is clear. These guys are on the same page. 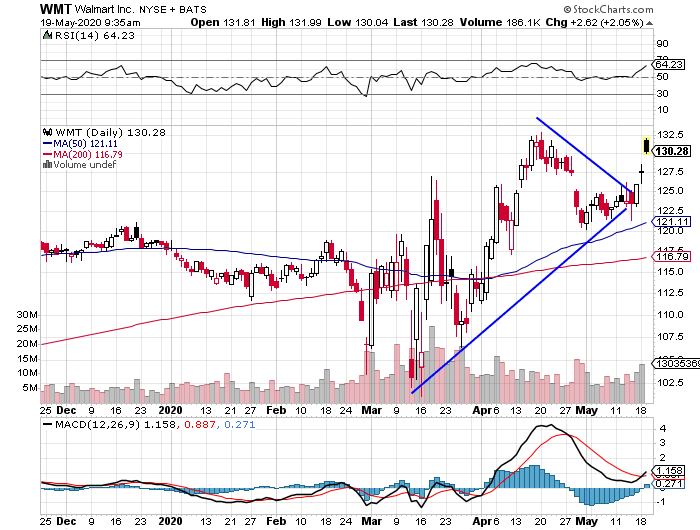 Last week I showed you this chart, and wrote that the closing pattern of lower highs coupled with higher lows signaled the probability of an imminent explosive move in the share price. We now have the move and we now know it was an upward move.

Honestly, I think these shares can go to $150. Highly rated analyst Rupesh Parikh at Oppenheimer place a "Buy" rating with a $145 price target on Walmart today. I only run with about 1/8 of what I would call a full investment in this name, so for me, this was an earnings related trade. I am a financial mercenary, and I have a nice profit to protect. I will likely be flat the name by day's end.

That said, I like the name, and will repurchase if the shares sink back into the low $120's. These guys are cooking with gas.

Get an email alert each time I write an article for Real Money. Click the "+Follow" next to my byline to this article.
TAGS: Earnings | Economy | Investing | Stocks | Technical Analysis | Trading | Retail | E-Commerce | Coronavirus