Monday will be a day of digesting. The Taliban has retaken Afghanistan. The Delta variant of the SARS-CoV-2 virus is certainly denting economic performance, made plain by Chinese macroeconomic performance that badly undershot estimates for the month of June. The fiscal cavalry appears to be potentially delayed at best, while on the monetary side, support appears to be growing to take a more head-on approach to addressing consumer level inflation.

None of these conditions will change much by Tuesday morning, but at least by then, the major retailer-earnings-apalooza will have begun, as both the Home Depot (HD) and Walmart (WMT) offer the trading/investing public something to chew on. I am long both of these names, but Walmart, sluggish for over a year, has been on the move of late, up 11.2% off of the stock's mid-June low, and up 4.7% just for August. Let's prepare ourselves.

Twenty-seven sell analysts follow Walmart. For the firm's second quarter, consensus view for EPS is for $1.56 on revenue of more than $136 billion. Whispers are running 10 to 15 cents above that consensus. The range of expectations for those 27 opinions spans for EPS from $1.50 to $1.65, and for revenue from $130 billion to $145 billion. These numbers will be measured against adjusted EPS of $1.56 on revenue of $137.7 billion for the same period one year ago (during the height of the pandemic), and adjusted EPS of $1.27 on revenue of $130.4 billion for same period two years ago (pre-pandemic).

There are several reasons why investors may have recently and suddenly flooded into the stock. Easiest to see is the stock's year long underperformance versus the broader large cap space, and the Consumer Discretionary sector specifically. One might say that Walmart is due. One might look for increased guidance going over the balance of the year.

There could be an expectation for a surge of back to school shopping, but the Delta variant would seem to be cooling that idea. What it very well may be is the expectation for child-care tax credits and other fiscal help that would be included in the larger $3.5 trillion budgets resolution that passed in the Senate and will shortly come up in the House. That could boost Walmart and other retailers that cater more to those toward the lower half of the income distribution curve.

Beyond drivers of performance such as that, two backward looking performance metrics will likely matter more to Wall Street than the headline numbers. One will be same-store sales. Walmart guided this number toward low single digit (in percentage terms) growth, but that was months ago. Wall Street seems to be looking for something closer to middle single digit growth. What else matters will be e-commerce. For the first quarter, Walmart posted very healthy e-commerce growth of 43% as online sales now account for 12% of Walmart's entire retail business.

No, the story circulating that Walmart is looking for a senior director who will "identify customer needs and translate them into product requirements" as well as identify cryptocurrency investment and partnerships will not matter. At least not right now. 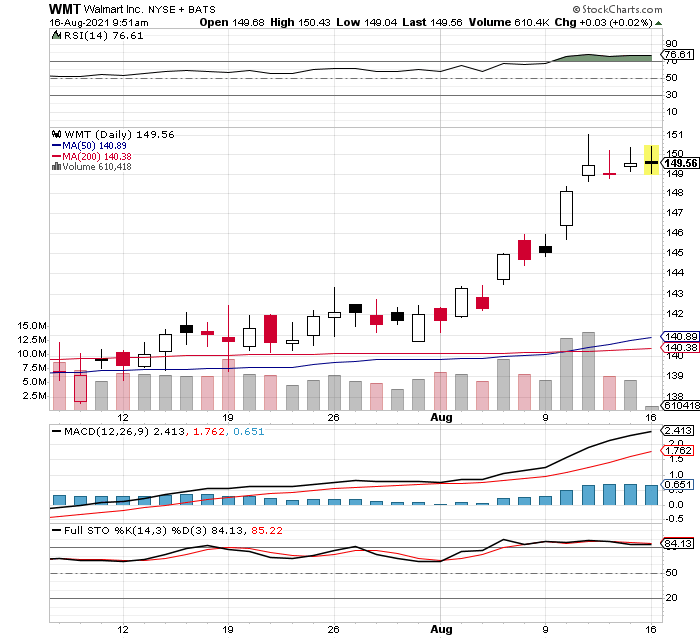 Some summer seasons for Walmart. Does not take much of an education in technical analysis to see that the shares have become overbought. Choose a metric, any metric.

Year to date, Walmart looks more like it broke out of a basing pattern that had been in place since early April.

Going back a full year, readers can see that the March low helps create the Pitchfork model that would still be quite healthy and remain intact, even if the shares hit central trendline resistance, while also grappling with potential resistance at the highs ($153-ish) of November 2020. Coincidentally, that red line crosses into our central trend line right here as WMT prepares to post earnings. So, I ask,  and I may be wrong, but I ask, have you seen a name better positioned for a little profit taking? I think that's exactly what I will do.

Note: The investor is ensuring a profit on a portion of the position, while being paid to expose him or herself to equity risk (only in the same size as the equity sale... 1 contract to 100 shares) at potential support at the lower trendline of the Pitchfork. Even if the shares are put to the investor upon expiration, the investor will have extracted a net of more than $6 of capital per share from the position (including the premium from the sale of the puts).

Get an email alert each time I write an article for Real Money. Click the "+Follow" next to my byline to this article.
TAGS: Earnings | Investing | Markets | Stocks | Technical Analysis | Trading | Retail | E-Commerce