By now everyone who wakes up with business news on the brain has seen Walmart's (WMT) fourth quarter results. I have gone over the results several times now. Long-time readers well know that I have backed and been long Walmart long-term. Readers also know that my loyalty to Walmart had been cemented during my time of need, when back in the spring when I was in bad shape, their e-commerce business, along with rival Amazon's (AMZN) , helped me provide for my family. It was their reliability when many others fell way behind that got me even more behind the firm than I already was. As an investor, I had crossed the line that I teach to others to never cross. Walmart for me, had become an emotional investment, I could no longer be mercenary when trading the name. Major sin in this sport that you and I play.

For the quarter reported, Walmart was like a football team that amasses a tremendous amount of yardage on offense, compiling first downs and making everyone's stats look good, but without crossing the goal line. What looks, when studied under a microscope to be a spectacular quarter, becomes a tough one, and then there is the guidance based on an expected return to pre-pandemic era growth. The numbers to put it mildly, greatly impress, while managing to disappoint at the same time. Let me explain.

Walmart posted adjusted EPS of $1.39, missing consensus view of $1.51. GAAP EPS showed an outright loss at $-0.74. This bottom line performance came on blowout revenue generation of $152.1 billion, which not only easily beat the street, but was also good for above trend year over year growth of 7.3%. Poring over the data, Walmart exceeded quarterly expectations across just about every metric that I can dig up.

There was indeed some more good news before we move on. The firm declared a $0.55 quarterly dividend payable April 5th to shareholders of record March 19th. That's a one penny increase, now yielding about 1.5%. Walmart also authorized a new $20 billion share repurchase program.

I'd like to blame the negative GAAP EPS and poor stock performance this morning on gross margin of 23.7% for Q4, slightly below expectations, but there's much more to this. Adjusted operating income actually decreased for the quarter due to Covid-19 related expenses and the firm moving to repay property tax relief in the UK. That all matters just for the fourth quarter, the stock is trading lower, primarily because Walmart reinstated forward looking guidance and it's really not bad at all, but full of more singles and doubles than three run homers.

The firm also sees higher expenses, and it's not just the buy-back. Walmart expects to see an approximate $14 billion in capital expenditures on the supply chain, automation, and technological innovations, while increasing the firm's average hourly wage to $15 from the $14+ that it stands at now. What that means is that roughly 425K Walmart employees out of a total of 1.5 million will likely see a pay raise. 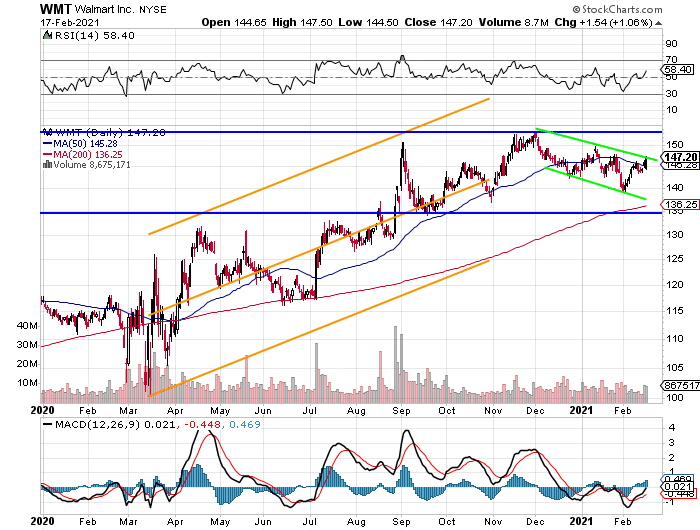 There's a lot to look at on this chart, so I will go through it slowly to see if you see what I see. First, outlined in orange, we have the 2020 uptrend that turned almost as precisely as did the calendar. At first, I thought I read the chart as a basing period of consolidation (blue lines) that stretched from the start of September to the present. Only this morning, did I see what I think I now see, outlined in green. That may be a new trend, and not part of the basing pattern.

I can't know this until I see if the $135 area is tested and what the stock does with that test. Should support show at $135 or better, then the blue pattern is still in control, and I can add. (I am long WMT long-term, so my net basis is not being threatened.) Very interestingly, the 200 day SMA is also in that area... at $136.25. That spot cracks and a number of portfolio managers will be forced by their risk managers to reduce exposure. So... I can add right in there, but if I am wrong, I am going to have to be quicker than Paladin on the trigger.

(Walmart and Amazon are holdings in Jim Cramer's Action Alerts PLUS member club. Want to be alerted before Jim Cramer buys or sells these stocks? Learn more now.)