To Infinity and Beyond Meat

I took a look at Beyond Meat (BYND) upon the initial public offering back in early May. A devout carnivore since the day I was born, I paid no mind. I understand the virtues of eating less meat from a health perspective, but I'm an old Irish guy. I'll die with a corned beef that goes bad in two months in my fridge. So it is that I screwed around with some of the other unicorns that came to market this Spring. Nailed Pinterest (PINS) , gave most of it back in Lyft (LYFT) , got out with my shirt in one piece and nothing more in Uber (UBER) . Then the markets rolled over. I focused my portfolios more narrowly. Still watching this incredible stock.. BYND that seemed to mostly go higher despite the markets, and despite the lack of profit.

May 28th. That was the day that Bank of America/Merrill Lynch initiated coverage of BYND with a Neutral rating, while cautioning on not only valuation, but the possibility of rising competition across the "meatless" meat space. BAML placed a Price Objective of $85 on the stock. BYND closed that day at $86. Same day, JP Morgan initiates coverage with an Overweight, citing potential for the firm to beat consensus on revenue for the year, with a price target of $97. The stock closed the next day, May 29th at $97.50. Uncanny.

I have asked my vegan friends what the Beyond Meat product tastes like. For the most part, they like the product a lot. I mostly got "it's really good", with only one who said it was not as good as actual meat. Though I am not opposed to eating meat in the least, there are days that I prefer plant based protein, so I am also not opposed to giving the product a chance, though I have not as of yet.

Beyond Meat is expected to report the firm's fiscal first quarter this (Thursday) evening. Consensus view is for EPS of -$0.15 on revenue of $38.93 million. I think what the market does to the stock after they release this data will rely more upon guidance, as well as what they say about the potential for landing large fast food chains as clients versus rising competition, and then lastly success in product placement at your local grocer. Meat aisle versus frozen vegetables aisle.

This is key to growth. The KFC unit of Yum! Brands (YUM) is willing to test plant based meat substitutes, and the Burger King unit of Restaurant Brands International (QSR) has already done so with a special Whopper Sandwich in St. Louis that has supposedly done well. These are the latest additions to a group moving forward in this space that would include Red Robin Gourmet (RRGB) , White Castle, TGI Fridays, and Carl's Jr. The great white whale here would be McDonald's (MCD) .

McDonald's is said to be considering such a menu item without making a commitment. It has been said (by Jefferies) that an agreement with McDonald's could be worth $25 to the stock price.

It's not just Impossible Foods that competes head to head with Beyond Meat. Earlier this week, Nestle (NSRGY)  announced plans to roll out an "Awesome Burger' this autumn, and Tyson Foods (TSN) is known to be investing in a similar idea.

This is the battleground where supply and demand intersect. My thought is that I have no doubt that demand is there for high quality meat substitutes. Recently this has driven shortages for these products around the country. Competition will either drive more realistic valuations into the stock price, or have the complete opposite effect of creating interest in either investment or perhaps even an acquisition on behalf of one of the large cap food companies. How do you know? Honestly, I don't know. I missed the run, as some of you may have. An equity stake ahead of the numbers will either make a fool or a champ out of one who "takes a shot" at these levels. An article in Barron's stated that more than 30% of all shares available for trading have been sold short. We'll get more information on short interest next in about a week's time. That does not help us today, but the implication would be that in the event of disaster, a bid would show up... somewhere. 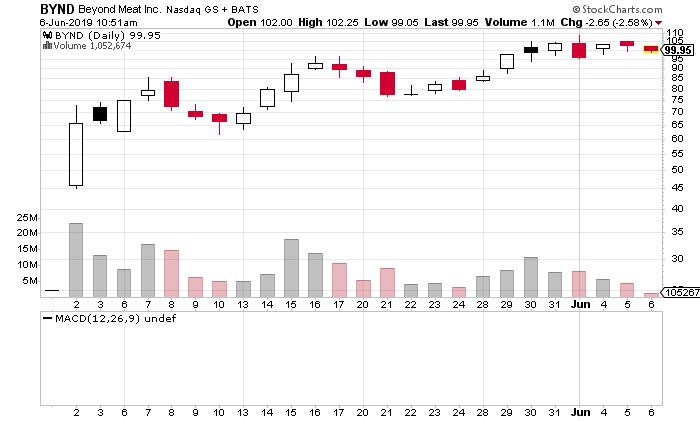 The chart, as you can see is just not helpful, at least not to me. I think that if one needed to do something today, the best thing to do would be to wait on taking an equity stake. A risk averse options spread would be my most likely play at this time. Bull Call, or Bear Put? That's up to the individual. Personally, if I am feeling lucky this afternoon, I may go this route, if I do anything at all.

Note: The trader would be risking a net $270 to try to win back $700 by the Friday expiration. I see no reason to stick one's neck out further than that. The trade works the same way in reverse for those bullishly inclined.

Get an email alert each time I write an article for Real Money. Click the "+Follow" next to my byline to this article.
TAGS: Investing | Markets | Options | Stocks | Technical Analysis | Trading | Food & Staples Retail | Consumer Products | Earnings Preview