The fast-paced Lightning Round segment is a viewer favorite. During Wednesday's Mad Money program, one caller asked about Renewable Energy Group (REGI) : "I think that company is good. I say buy it," said host Jim Cramer about the biodiesel production company.

Let's check out the charts and technical indicators.
In this daily bar chart of REGI, below, we can see that prices made a strong rally into a February zenith. Prices were correcting lower until some bottoming action in April and May. REGI rallied into June and crossed above the 50-day and 200-day moving average lines.
Prices have quietly pulled back into July. The On-Balance-Volume (OBV) line has been steady/flattish since late March, but a turn to the upside would be welcomed. The Moving Average Convergence Divergence (MACD) oscillator is just slightly below the zero line.

In this weekly Japanese candlestick chart of REGI, below, we can see a large bearish engulfing pattern in early February to mark the top of the advance. Prices declined to break the rising 40-week moving average line and we can see a rally failure at the underside of the average line. Notice the upper shadows in early June?
The weekly OBV line is in a decline from February, telling us that sellers are more aggressive. The MACD oscillator is below the zero line, but it has narrowed significantly. Maybe we will see a new buy signal in the weeks ahead.

In this daily Point and Figure chart of REGI, below, we can see that the software is projecting the $79 area as a potential price target. 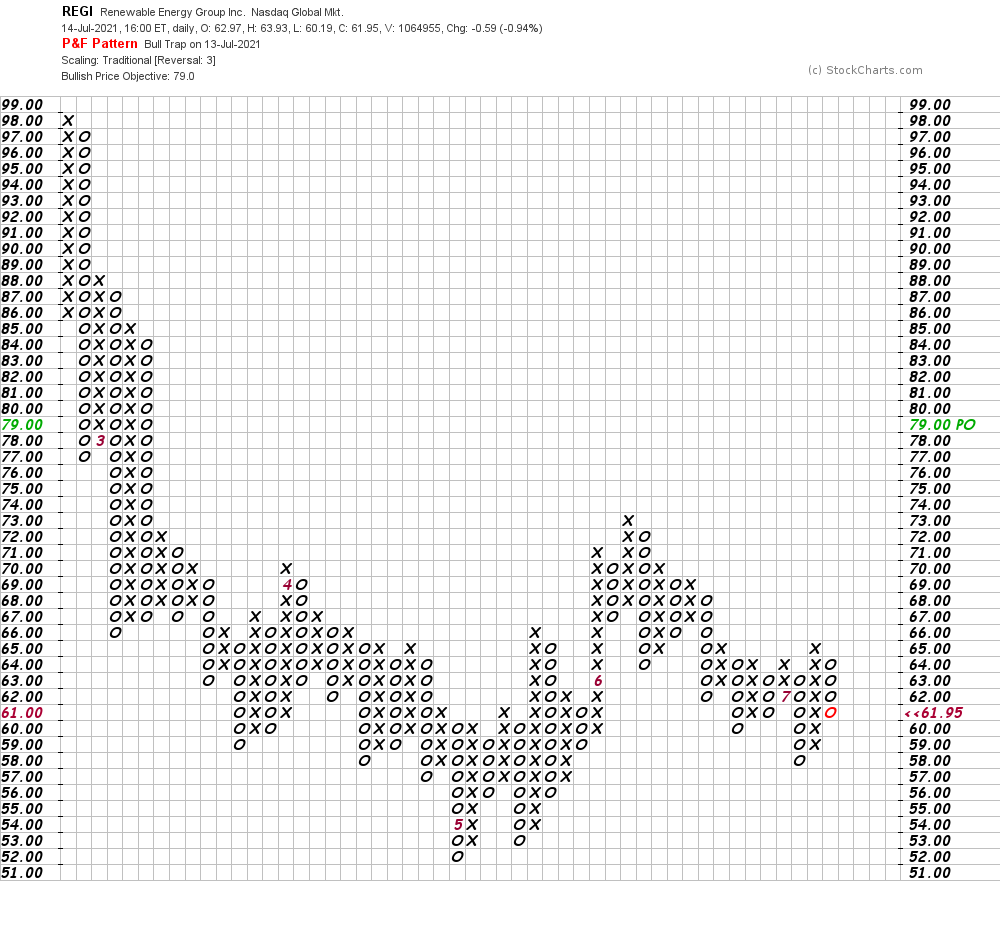 Bottom line strategy: The charts and indicators of REGI are getting closer to a buy signal or recommendation. With weakness in the broad market averages, I am willing to wait for a better buying opportunity.
Get an email alert each time I write an article for Real Money. Click the "+Follow" next to my byline to this article.
TAGS: Investing | Technical Analysis | Energy | Renewable energy | Mad Money