The bell had rung. Vertex Pharmaceuticals (VRTX) had closed at $216.77, up more than three bucks, up 1.5% for the day. Within seconds, the stock would go into an after-hours free-fall. News had broken that Vertex would abandon any further development of the firm's lead candidate for the treatment of alpha-1 antitrypsin deficiency, which is a rare genetic disease that impacts the liver's ability to make proteins normally.

Vertex reported Phase 2 clinical results for VX-864, and while compared to patients dosed with a placebo, patients treated with the candidate did see statistically significant increases in mean functional alpha-1 antitrypsin levels from a baseline. The results however, in the company's opinion, are not likely to lead to substantial patient benefit. Vertex had apparently discontinued the development of a similar candidate last autumn due to safety concerns. The firm will focus on other small molecule candidates, but is not close on anything.

Vertex's next candidate for the treatment of this liver disorder will not be tested on human beings until 2022, and any kind of mid-stage readouts could not at this point be expected for two to three years. Why this is key is that the firm has become quite profitable due to the success of its suite of treatments for cystic fibrosis, but clearly needs to diversify as sales growth has slowed. VX-864 was seen as the closest candidate in the firm's pipeline to doing just that.

The firm also co-released some positive looking early stage data with CRISPR Therapeutics (CRSP) for the treatment of sickle cell disease, but the failure to progress with VX-864 was the focus on Thursday night.

Traders will have by now noticed the pop in the shares of Arrowhead Pharmaceuticals (ARWR) , and Takeda Pharmaceuticals (TAK) . These two operations are working together on a late stage candidate meant to take on alpha-1 antitrypsin deficiency. There is hope for those suffering this malady.

I have noticed 15 sell-side analysts that have opined on Vertex since this news broke last night. Of the 15, seven are rated at five stars at Tip Ranks. Of those seven, six have reiterated "buy" (or their firm's equivalent) ratings, with an average target price of $290. Of those six the high target is $347 (Edward Tenthoff at Piper Sandler), and the low target would be $245 (Cory Kasimov at JP Morgan). There was one "Hold" rating. That was Morgan Stanley's Matthew Harrison who has a target price of $205. 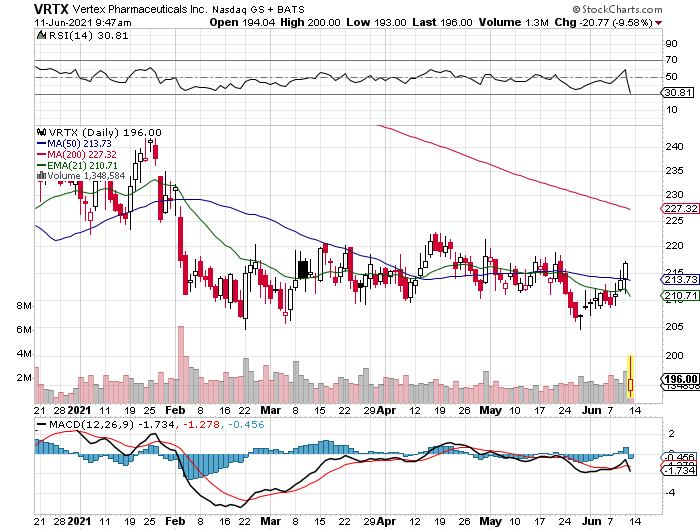 My first thought is... wow, that's one heck of a gap. Support that had been tested multiple times since last October had broken. Both the 50 day SMA and 21 day EMA are broken as potential short-term support after only being retaken this week.

While it is tempting to take on a long-side trade here, I don't see a good reason, other than the opinion of a few highly rated analysts who were already (except for Harrison) very wrong, for a rapid recovery. Yes, gaps do usually fill. My thinking, and this is just opinion... that Vertex is a prime candidate for Jim Cramer's "three day" rule. At least for the equity. See where this thing is trading on Monday or Tuesday. By then, you will either have a better entry point, or will have missed an opportunity. Neither outcome will get your face ripped off.

You could buy a $205 call expiring in a week for about $1.75. Something like that might be the play.

Get an email alert each time I write an article for Real Money. Click the "+Follow" next to my byline to this article.
TAGS: Drug Approvals | Investing | Markets | Stocks | Technical Analysis | Trading | Biotechnology | Pharmaceuticals