In his second "Executive Decision" segment of Mad Money Thursday evening, Jim Cramer checked in with Sanjay Poonen, COO of VMware (VMW) , a stock that's been more than cut in half from its highs.

VMware provides virtualization software that powers the critical apps that companies depend on, Poonen explained. Whatever you are doing, there's a good chance that some of the apps you're using run on VMware's software.

When asked about 5G wireless, Poonen commented that the amount of bandwidth customers have is always a critical component to the services they can use.

Let's check and see if we can make use of the charts of VMW.

In this daily bar chart of VMW, below, we can see that prices have been shrunk from around $205 down to less than $90. Prices have recently staged a rebound to the $115 area and there is a reversal pattern - a close above the high of the low day. This pattern is quick turning but does not yield a price target.

The trading volume shows a pattern of heavier turnover when prices have been at a low and March looks like the same pattern.

The daily On-Balance-Volume (OBV) has been in a downtrend but only since November, which is interesting.

The Moving Average Convergence Divergence (MACD) oscillator is in sell territory below the zero line but the two moving averages that make up this indicator have begun to narrow. We could soon see a cover shorts buy signal.

In this weekly bar chart of VMW, below, we can see that prices made a large top pattern above the $130 level which could be considered a "neckline".

The weekly OBV line shows weakness since May 2019 which is more bearish than the daily picture (above).

The weekly MACD oscillator is bearish and not yet narrowing.

In this Point and Figure chart of VMW, below, we can see two interesting developments. First, a trade at $115.37 will improve this chart and could open the way for further near-term gains. Second, unfortunately this chart still projects a downside price target in the $70 area. 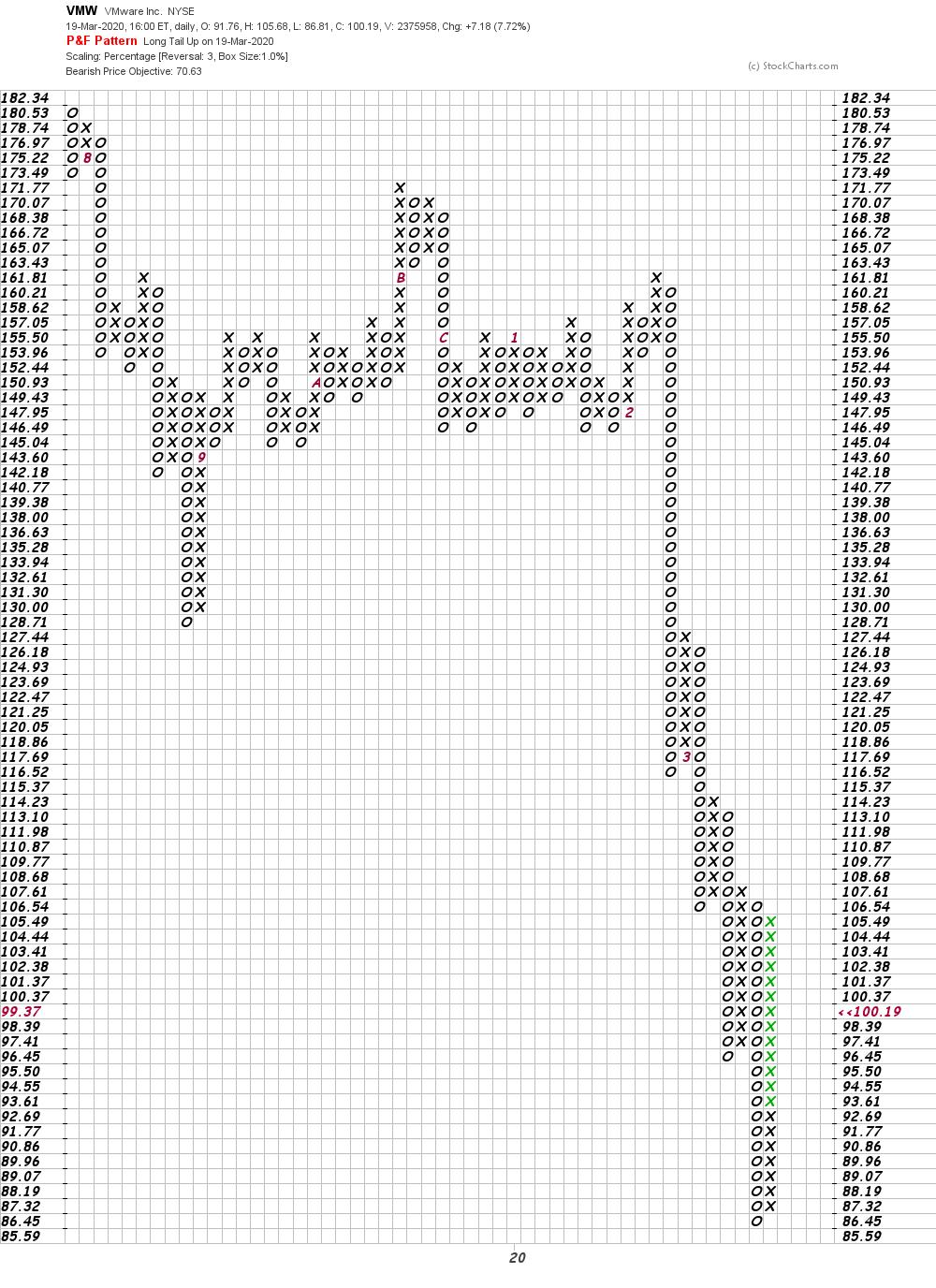 Bottom line strategy: With the broad market making a low this week (my opinion) we should see some sort of price recovery for VMW.

Get an email alert each time I write an article for Real Money. Click the "+Follow" next to my byline to this article.
TAGS: Investing | Stocks | Technical Analysis | Trading | Software & Services | Technology | Technology Hardware & Equipment | Mad Money | Executive Interview | Coronavirus

Caterpillar Is Breaking Out of Its Cocoon

As CAT cracks open to the upside, its new-found strength could invigorate the Dow Industrials.