For his Executive Decision segment of "Mad Money" Monday, Jim Cramer sat down with Sanjay Poonen, COO of VMware Inc. (VMW) , the virtualization and data center software provider that reported strong results six weeks ago. Despite the good numbers for the first quarter VMware plunged from $200 to just $160 after the company failed to raise guidance.

Poonen told Jim we're currently in the "golden age of software" and the future remains bright for companies such as VMware. He said when it comes to the data center, VMware is in a unique position to work with everything, including many vendors such as Dell Technologies Inc. (DELL) , Hewlett Packard Enterprise Co. (HPE) and Lenovo, among others. When it comes to the cloud, VMware partners with Amazon.com Inc.'s Amazon Web Services (AMZN) , Microsoft Corp.'s Azure (MSFT) , Alphabet Inc.'s Google (GOOGL) and Alibaba Group Holding (BABA) .

Poonen added that IBM Corp. (IBM) is also a terrific partner for the company, and while VMware does compete with a small part of IBM's Red Hat, overall IBM and its 2,000 customers all remain great customers of VMware. When asked about the government ban on the Chinese company Huawei Technologies, Poonen said VMware will abide by the government's wishes, but he noted that tariffs and trade issues so far have not affected itsr business.

Let's step back from the fundamental story and name dropping and check on the simple charts and indicators.

In this daily bar chart of VMW, below, we can see an uptrend the past 12 months, but that trend is being challenged. Prices gapped lower in late May and continued down to test the cresting 200-day moving average line. The slope of the faster 50-day moving average line has been negative for the past six weeks. The $165-$160 area is trying to provide support, but trading volume looks to be neutral and the daily On-Balance-Volume (OBV) line is only moving sideways. If the OBV line was rising it would be a more positive picture. The trend-following Moving Average Convergence Divergence (MACD) oscillator is rising toward the zero line but it has a ways to go.

In this weekly bar chart of VMW, below, we can see that prices have nearly tripled from their lows of three years ago. VMW is testing the cresting 40-week moving average line. The weekly OBV line shows a peak in April/May with a dip in June, suggesting that sellers of VMW became more aggressive. The weekly MACD oscillator is in a take profits sell mode.

In this Point and Figure chart of VMW, below, we can see a potential downside price target of $155 or so. 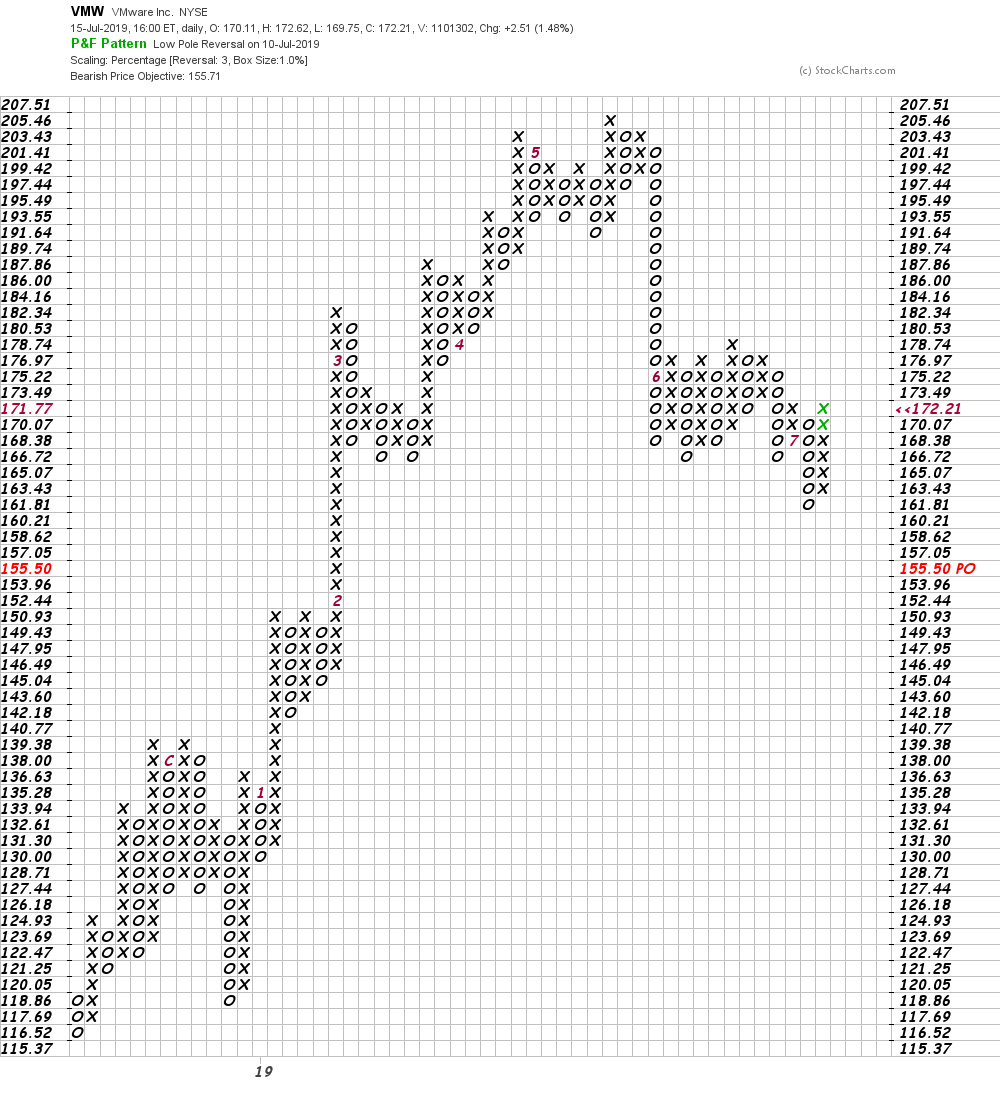 Bottom line strategy: Traders and investors were spooked when the company did not raise guidance and that weakness does not look like it has run its course. Stand aside as VMW could get cheaper in the weeks ahead.

Get an email alert each time I write an article for Real Money. Click the "+Follow" next to my byline to this article.
TAGS: Investing | Stocks | Technical Analysis | Software & Services | Technology | Mad Money | Executive Interview | Real Money