Village Farms (VFF) released earnings last week to little fanfare despite strong results. The company reported yet another positive quarter for Pure Sunfarms (PSF). I've talked for a few years now how this was the gem and the reason to own. It still is and continues to prove itself. Sequential net sales rose 38% for Pure Sunfarms and adjusted EBITDA skyrocketed 192%!

The company has been killing it in retail branded sales and was the top-selling licensed producer of dried flower in Ontario, Alberta, and British Columbia. Admittedly, I had some concerns when Pure Sunfarms lost Emerald Health as a forced wholesale buyer (at attractive rates for PSF), but I no longer feel that way given the retail dominance. Gross margins rose from 33% last year to 40% this year even while revenue rose triple digit percentage points year-over-year. Overall, the bottom-line growth with adjusted EBITDA of $7.4 million was great to see. That's in U.S. dollars.

Produce didn't continue to drag, but I think that's going to be less and less of an issue going forward based on the company's announced acquisition of Balanced Health Botanicals (BHB) . BHB is a huge CBD brand in the U.S. retail market. Now remember, VFF has strong distribution on the grocery and big box stores while BHB has a strong supply chain and e-commerce platform. But, again, the diamond may be in VFF's hand. And that diamond is the huge growing facility in Texas. The company has nearly 6 million square feet of greenhouse grow space that I believe will all become hemp/CBD over the next several years. Having the products and distribution to create a complete vertically integrated platform should go a long way toward ending the produce drag. 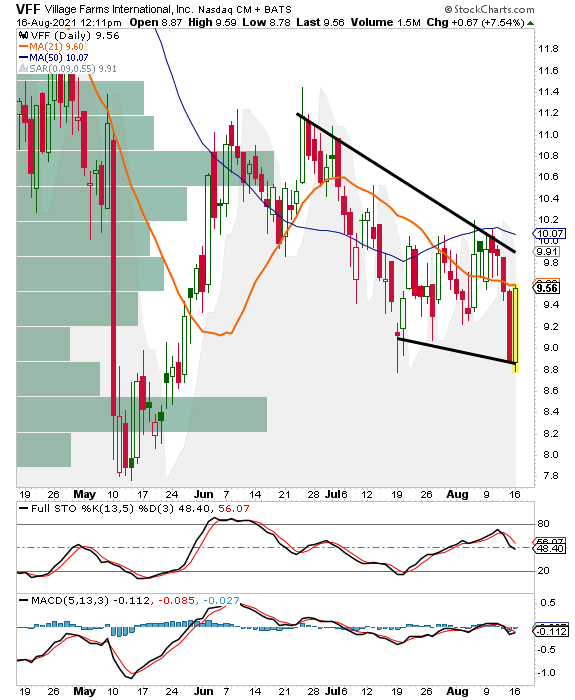 Although the daily chart may not look great, I like seeing the positive reaction in a market that is struggling with smaller names and growth names. Cannabis certainly has been thrown out the window as of late. The $8.80 floor is what I want to watch. Downside on a break is $7.80. Our resistance sits around $9.90 but we can probably just call it $10 because of how people love round numbers. The Full Stochastics indicator needs to bounce here. The recent breakdown is troubling. Additionally, the 21-day simple moving average (SMA) acted as resistance earlier in the day. The 50-day SMA still lies ahead.

Now with all the technical worries on the table, this is still a very strong fundamental story. That's why I own it and added today. My goal isn't to sell on a bounce to $10.80, but I would add at $8.80 and $7.80 if my portfolio and risk tolerance have the room. Management has executed on the roadmap thus far to date. Today, they extended that map and I like where the road is going. I'm still a buyer.

Lastly, check out Doug Kass's notes on cannabis today. I believe they are spot on!

Get an email alert each time I write an article for Real Money. Click the "+Follow" next to my byline to this article.
TAGS: Investing | Stocks | Technical Analysis | Trading | Agriculture | Cannabis