During Wednesday night's Lightning Round as part of Jim Cramer's informative Mad Money program, he favored Viacom (VIAB) over AMC Networks (AMCX) : "No, I'd rather see you in Viacom," Jim said. Let's look at the charts of VIAB this afternoon.

In this daily bar chart of VIAB, below, we can see that prices have largely moved sideways since the beginning of the calendar year. VIAB has crossed above and below the 50-day moving average line several times. The flat 200-day average has also been tested several times but without yielding a definitive upside breakout.

The Moving Average Convergence Divergence (MACD) oscillator has been swinging around the zero line all year but has been making higher lows from January to March to late May. An upside move looks like it is pending.

In this weekly bar chart of VIAB, below, we can see the last three years of activity. Prices show a large percentage decline in 2017 followed by a large triangle-like pattern.

Prices have crossed above and below the 40-week moving average line and the weekly OBV line is neutral.

The weekly MACD oscillator shows a similar triangle pattern that has approached an apex. 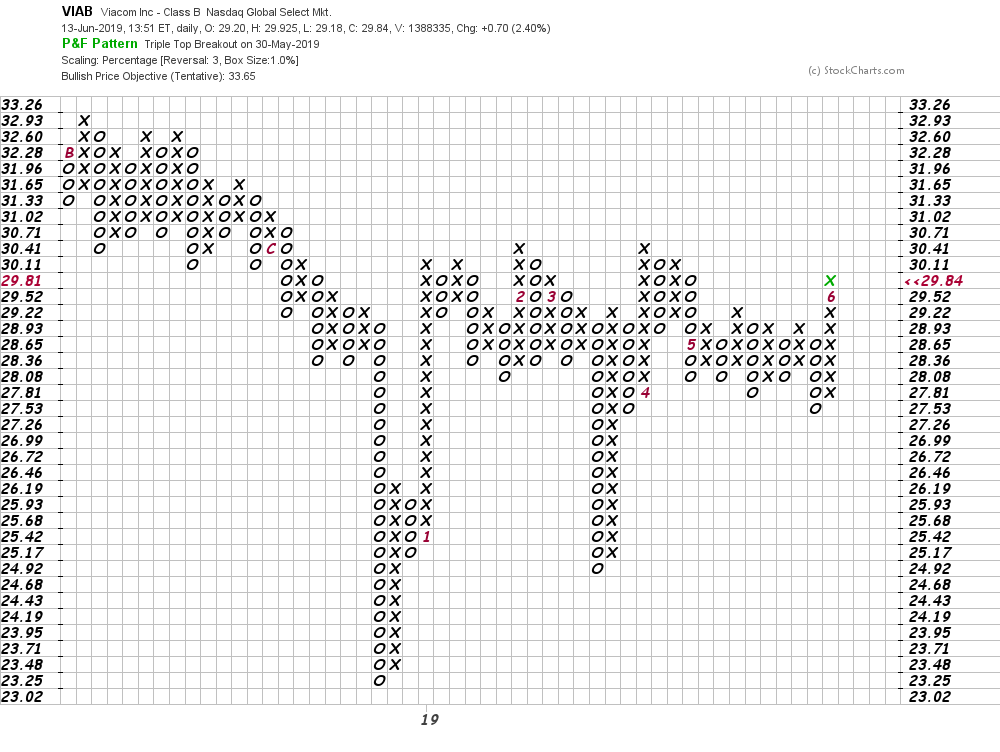 Bottom line strategy: I like to buy strength so traders could go long above $31 risking below $28.

(Viacom is a holding in Jim Cramer's Action Alerts PLUS member club. Want to be alerted before Jim Cramer buys or sells VIAB? Learn more now.)

Get an email alert each time I write an article for Real Money. Click the "+Follow" next to my byline to this article.
TAGS: Investing | Stocks | Technical Analysis | Trading | Digital Entertainment | Movies | Mad Money