The name is now one of my oldest holdings. I have been continuously long Verizon (VZ) without being flat the name at any point in over two years. Last week I shaved a few underperformers in order to feed some growth names that were on sale at greatly discounted prices. It was last Thursday, I remember teeing up Verizon for a sale. My equity stake in Verizon has only returned an unrealized 7% over these past two years...certainly qualifying the name as an underperformer. I paused. Then I moved on. Not only did I not sell my shares in Verizon, I did not sell any of them. I still believed. Why? Why did I still believe that Verizon could eventually come through for me?

I had originally gotten into Verizon as part of my 5G integration play. As that seemed farther and further off, I convinced myself to stay in Verizon by shifting the stock over to my dividend portfolio. At an annual payout of $2.51 per share, Verizon does yield 4.53% and has increased the payout every single year since, and including, 2007. I did not include dividend payments in that 7% mentioned above but fat dividends paid out by a stock that has never met either my target price nor my panic point does make just hanging on all that much easier. Let's get to the crux of the matter. Why do I still believe in the name? What is the draw? Obviously I am (hopefully) not a moron, as Warren Buffet has decided to pull up alongside over the past year/quarter.

A lot has been made of the size of the bidding for mid-band spectrum airwaves at auction, and we'll hear more from the companies themselves as the quiet period relative to this auction does not end until March 10th. I really do not know who was shocked by this. Verizon led the way, bidding roughly $45.5 billion, well ahead of AT&T (T) at $23.4 billion. The auction in its entirety saw "just" $80.9 billion in bids, so those are your players, but everyone and their brother knew that Verizon and AT&T had to be aggressive. They had no choice if they were to remain competitive with T-Mobile (TMUS) after that firm's enlarged exposure to low-band spectrum airwaves.

Quick class... low-band airwaves travel further geographically, but are able to carry significantly less data. High-frequency airwaves, where Verizon had focused effectively, carry much more data than low-frequency airwaves, but not nearly as far. This auction was a fistfight over the C-band, or middle ground, which is a balance of both. As the nation's largest telecom provider, Verizon had to swing for the fences. Yes, Oppenheimer downgraded both Verizon and AT&T after the auction, but really it is beyond me that these numbers surprised anyone. Now, in order to provide coverage Verizon will need more transmission sites to support their "higher quality" network. That will cost even more dough, and probably be a tailwind in the long run for a firm such as American Tower (AMT) .

Basically, I have laid out how expensive merely defending the firm's turf held prior to the national upgrade to 5G technology is going to cost Verizon. That's better than not defending the business, but the share only trades at 10 times earnings. This is not really a catalyst, and the expense was apparently somewhat priced in. Is there a potential growth engine? Glad you asked.

There is potential to turn Verizon from a stable telecom into a "growthy" type name. The potential is the "Verizon Media Group". I know what you're thinking. The Huffington Post? Gone. Tumblr? Gone. AOL? Not gone, but largely forgotten. Yahoo? Interesting. While much of Yahoo has faded into oblivion, Yahoo Sports has only become stronger. Yahoo Finance has only gained eyeballs. Just an aside, in between Jim Cramer on CNBC and Liz Claman on Fox Business, some of the best mid-day market based programming available is seen on Yahoo Finance. Of course, I'm biased, I will appear on YF Premium tomorrow (Tuesday) and on Yahoo Finance this Wednesday afternoon.

Let's take this away from self-promotion, because that's not the purpose of this article. Let's think about Yahoo Sports, long the king of fantasy football and other fantasy sports. Verizon, through Yahoo Sports has entered into a venture with BetMGM, which itself is a joint venture between MGM Resorts (MGM) and Entain (a UK gaming operation).

You all know the gaming names that have been in the public eye, such as DraftKings (DKNG) , Penn National Gaming (PENN) , and Fox (FOXA) unit "Fox Bets" etcetera... since the U.S. Supreme Court overturned a bill banning the practice (at least nationally) back in 2018. Enter Verizon, the nation's largest telecom into the world of online sports betting supported by the already popular Yahoo Sports website that many fantasy sports fans have never stopped using. Think of not just the potential for what will be an industry of likely tremendous growth over the next five years, but also the potential for increased advertising revenue. If there is to be a multiple expansion for a firm like Verizon, it has to come from some kind of evolution. The stock trades at 10 times forward looking earnings. That leaves the shares at $55.85. Slap a 12 multiple on this stock? That's very reasonable... and that's an $11 move. What if you throw a 15 timer on this stock. Okay, let's not get carried away... but can we agree that the risk in this name is to the upside? 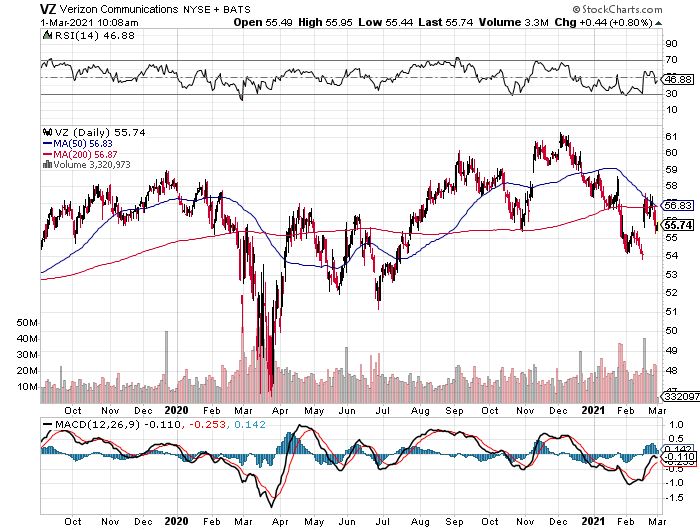 This is an 18 month chart. I did not mark it up at all. No need. Ex-the pandemic inspired broad market selloff in the spring of 2020, this stock has basically been in a $10 trading range since the cows came home. If you ex-the summer as well, we are talking about a $7 range. We'll use the $61 2020 high as the pivot, and we'll drag the panic point up to net basis, just to lock out the potential for loss.

Get an email alert each time I write an article for Real Money. Click the "+Follow" next to my byline to this article.
TAGS: Dividends | Investing | Markets | Stocks | Technical Analysis | Trading | Gaming | Telecom Services

Put This Semiconductor Materials Stock on Your Watch List

After a fundamental upgrade, we spent some time checking out the charts and indicators.

The Fed Must Change Its Pace

Last week's plunge in U.K. gilts was a warning shot across the bow of central banks everywhere.