Shares of Verizon Communications (VZ) are poised for a breakout - probably on the upside. Let's check on the latest charts and indicators.

In this daily bar chart of VZ, below, we can see that prices have been trading sideways since November. The up and down swings have gotten narrower and narrower. Or tighter and tighter - much like a winding up a watch spring (yes I am dating myself).

The daily On-Balance-Volume (OBV) line shows a positive trend for much of the past 12 months but it has been flat the past two months as the trading range has narrowed further.

The Moving Average Convergence Divergence (MACD) oscillator in the bottom panel has moved sideways around the zero line since October but now looks poised for another turn higher.

In this weekly bar chart of VZ, below, we can see that prices are above the rising 40-week moving average line. The chart pattern on this chart looks like a large ascending triangle going back to September or October. Volume looks like it has diminished during the pattern which is typical.

The weekly OBV line has moved sideways to lower since November and that fits with a triangle pattern.

The weekly MACD oscillator has been in a take profits mode since November but we could see a fresh outright go long signal.

In this Point and Figure chart of VZ, below, we can see a bullish pattern with more X's and more O's in the lower half of the pattern telling us that investors have been buying the dip. A trade at $61.03 will be an upside breakout. 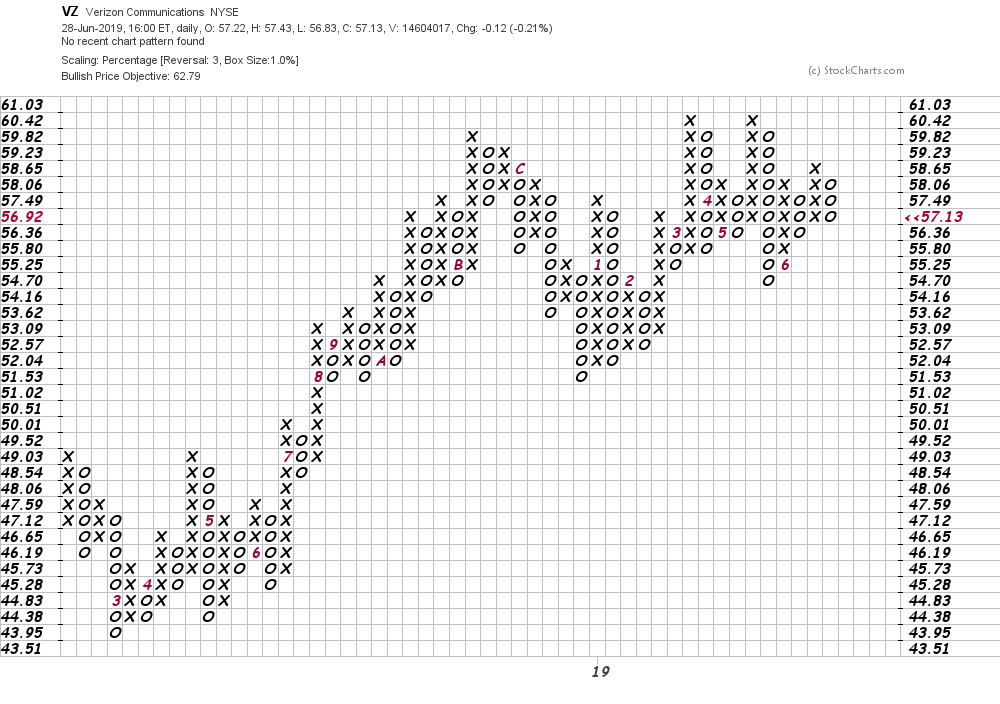 Bottom line strategy: VZ looks ready for an upside move. I like to buy strength so traders could consider going long above $59 and above $60, and more aggressively above $61.03. Risk to $56.

Get an email alert each time I write an article for Real Money. Click the "+Follow" next to my byline to this article.
TAGS: Investing | Stocks | Technical Analysis | Trading | Telecommunications | Telecom Services