I had not even thought of the stock for quite a while. That is until I saw earnings hit the tape last night. Veeva Systems (VEEV) , an early staple, almost two and a half years ago, when we were all putting "pandemic" portfolios together. This one was a home run. However, the past year or so has not been kind to the shares. Last night, that got worse. What gives?

For those about to ask... Just who the heck is Veeva Systems? Veeva is a California headquartered provider of cloud-based software, data, and business consulting solutions for the global life sciences industry. The firm's services are divided into two groups... Veeva Commercial Cloud and Veeva Vault.

The Commercial Cloud offers (big) data and analytics solutions to a number of industries including the medical profession. The Vault offers services that aid clients in the management/storage of content and data.

Subscription services drove revenue of $428.649M (+17% y/y), while Professional services posted revenue of $105.569M (+18.4%). GAAP Operating income landed at $101.1M, which was down 18.9% from the year ago comp. Adjusted operating income increased 5.4% to $202M. That's right, GAAP operating margin printed at 18.9%, while adjusted operating margin hit the tape at 37.8%. The adjustments? Mostly stock-based compensation with a little amortization sprinkled on top.

For the full fiscal year, the firm expects total revenue of $2.14B to $2.145B. Wall Street had been looking for $2.17B. Veeva also sees adjusted operating income of roughly $820M, and adjusted EPS of about $4.17. This is actually better than the $4.15 expected on Wall Street.

Veeva ended the period with a net cash position of $2.919B and current assets of $3.356B. Current liabilities at quarter's end totaled $799.4M. That makes the firm's current ratio a jaw-dropping 4.2. Stunningly strong. Total assets add up to $4.117B, which includes $532.2M in "goodwill" and other intangibles. At 13% of total assets, I do not see that as problematic. Total liabilities less equity of $872.7M includes absolutely no long-term debt. This balance sheet is golden.

So far, I have found seven sell-side analysts who are rated at four or five stars by TipRanks and have also opined on VEEV since these earnings were released last night. I did notice five analysts who rated fewer stars at TipRanks who opined on this name, so this survey could be broadened by easing the standard. Just a heads up.

Of these seven analysts, four rate VEEV at either a "buy" or their firm's buy-equivalent, while three analysts rate the stock at either a "hold" or their firm's hold-equivalent. The average target price of the seven is $214.29, with a high of $250 (Kenneth Wong at Oppenheimer) and a low of $185, twice (David Hynes of Canaccord Genuity and Karl Keirstead of UBS).

When omitting the high and low (once) as outliers, the average of the other five targets drops to an even $213.

The situation, I think, is obvious. This is a well run firm sitting on a tremendous balance sheet. No warts. No debt. Obviously no inventories. The problems are obvious as well. Margin pressure. Clients spending on services going forward is slowing. Highly valued stock (47 times forward looking earnings) in an environment that doesn't highly value stocks. 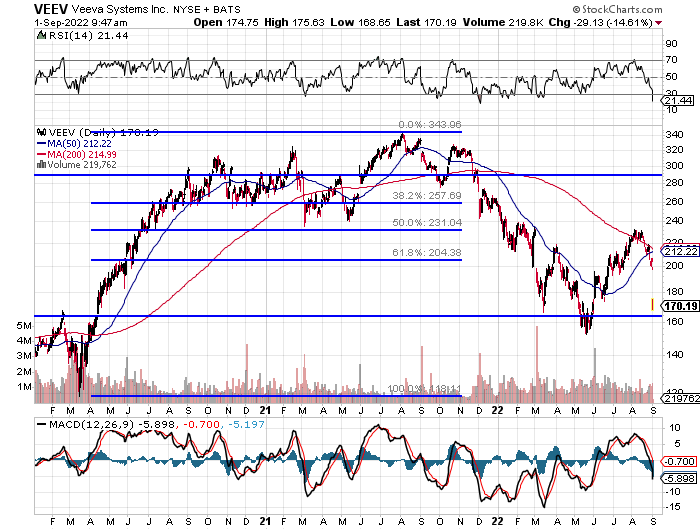 I show this chart in order to illustrate just what VEEV has done since the start of the pandemic. I drew in the 78.6% and 23.6% Fibonacci retracement levels for you as this model for whatever reason, only has the standard Fibs (38.2%, 50%, 61.8%) built in even though 50% is not a true Fib. Readers will see that the shares are now hovering, after this morning's beat-down, around a 78.6% retracement of the stock's entire march 2020 through August 2021 run. 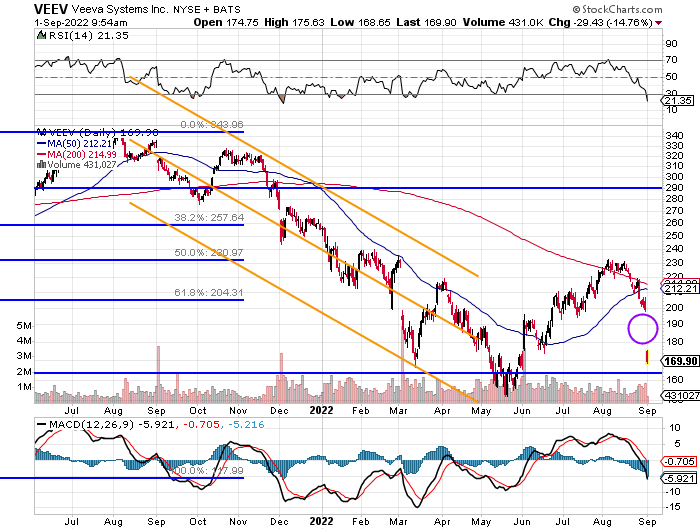 The stock had broken out of a downtrend in May that turned for the worst this past August. Now, the stock will at least have the filling of this morning's gap lower open to fill moving forward. The stock has now surrendered both its 50 and 200 day SMAs, and runs with a suddenly awful looking daily MACD and a reading for Relative Strength that screams "oversold."

No way. Not with August jobs tomorrow, and not with a three day weekend after that. Oh and not with September and October after that. I'm thinking of writing October 21st $190 calls for a little more than $3, but only if I can purchase the same number of October 21st $195 calls for around $2. I need a net credit of at least $1 to make the $5 risk worthwhile. Easier said than done as the options market for this name is illiquid. As for trading equity? I can see day-trading the equity. As for making a stand? Forget it.