Readers who have followed along know that Veeva Systems (VEEV) was one of our original "virus" plays back when the whole pandemic was just reaching U.S. shores, and thus impacting U.S. financial markets, not to mention deeply impacting human lives and families. Some of you may not recall. I have not written on the name often, and I have not pounded the table. I have traded in and out of the name, so my current long is only up about 30%, but if I had, or if you had just bought the name when we divvied up those portfolios back in the spring, you've hit a triple that had produced almost 100% at the market's top on September 2nd.

To refresh, Veeva is not a pharmaceutical, or a biotech. Veeva is a cloud-based software provider that focuses on the life sciences industry. Well known? No. But the clients are. This $41 billion San Francisco-based company serves over 900 clients that include many of the the names that might be considered to be "big pharma" such as Merck (MRK) , Eli Lilly (LLY) , AstraZeneca (AZN) , as well a number of biotechs such as Moderna (MRNA) and Biogen (BIIB) . In fact the list of well known clientele is so long, that putting them to paper would ruin the article. Veeva runs operations globally out of locations in North America, Europe, Asia, and Latin America.

Okay... this is the deal. Is it a breakthrough? Maybe. This is not a vaccine. This is a potential therapeutic for folks already ill. That's something badly needed right now. You get a semi-effective vaccine, and our lives do not go back to normal. The need is to turn this illness into something curable, or at least far less dangerous.

Veeva Systems along with a firm known as Bioforum are collaborating with RedHill Biopharma (RDHL) on a global Phase 2/3 clinical study to evaluate an orally administered candidate buy the name "opaganib" (Yeliva, ABC294640) in patients hospitalized with severe Covid-19 pneumonia requiring supplemental oxygen. The study will include 270 patients at up to 40 clinical sites around the world. The idea is to collect broad and rigorous data in a short amount of time.

Glad you asked. If it works, it sounds, in my opinion, almost too good to be true. Opaganib has already received "Orphan Drug" designation from the FDA (Food and Drug Administration) in the U.S. for the treatment of Cholangiocarcinoma, and is currently in a Phase 2a study regarding that cancer. Opaganib is also in a Phase 2 study for use in the fight against prostate cancer. Now, this entry into a Phase 2/3 study for use in treating Covid.

By description, Opaganib is a first in class, orally administered, sphingosine kinase-2 selective inhibitor with (check this out) anti-cancer, anti-inflammatory, and anti-viral activities that targets multiple oncology, viral, inflammatory, and gastro-intestinal indications. Pre-clinical data have demonstrated both anti-inflammatory and anti-viral activities that could reduce lung inflammatory disorders and mitigate pulmonary fibrotic damage. Opaganib has already demonstrated potent anti-viral activity against SARS-CoV-2, the virus that causes Covid, completely inhibiting viral replication in an in vitro model of human lung bronchial tissue. This drug has already been used under a compassionate use program in Israel with promising results.

This is how the deal is going to work. RedHill has developed this incredible sounding drug candidate that may fight various cancers, viruses including Covid-19, and the damage that these viruses cause through various inflammations. If successful, a grand slam.

RedHill has adopted "Veeva Vault CDMS", Veeva's modern cloud platform for data capture, coding, data cleaning, and reporting. In order to implement and configure this platform for RedHill's needs, Bioforum which is a certified Veeva partner, and data-based research organizer, has been selected.

Veeva had been trading up about $6 prior to the opening bell. The Tech sector is down early, and software is the weakest industry within. Hence the shares were trading lower. 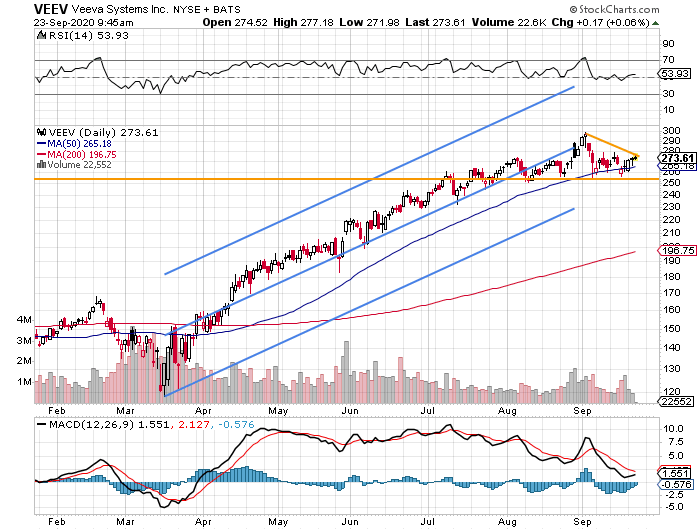 Readers will note that the shares have started to consolidate in September after losing the March through late August trend. This consolidation has produced a closing pennant that has now found support in generally the same spot ($255-ish) on four occasions now since mid-August. Are these shares set up for another run higher? I certainly want the shares on my book. Would I add here? Maybe if they survive the 50 day SMA.

You want to play the drug itself, and not software as an industry? 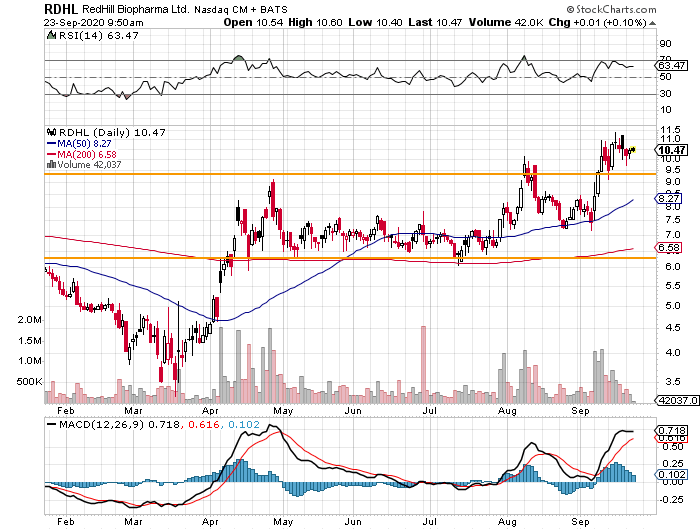 RedHill does not make money by the way, but is seeing a sudden and significant pop in revenue generation. The shares are priced low enough for retail investors but just out of reach for the "Stocks Under $10" portfolio. Voila! Here we are at Real Money. RDHL is feeling around for support at pivot ($9.25). Survive this, and one could have a nice little investment here. In fact, I think I'll buy some myself later today... after this piece is published.

Get an email alert each time I write an article for Real Money. Click the "+Follow" next to my byline to this article.
TAGS: Drug Approvals | Investing | Stocks | Technical Analysis | Trading | Biotechnology | Software & Services | Coronavirus