Stocks climb a wall of worry, and July's rally was a great example. The worst inflation in 40 years combined with two consecutive quarters of negative GDP led to the best month for stocks since 2020.

Then, on Aug. 1, strategists from Goldman Sachs GS threw some cold water on Wall Street's hot rally. "We think the market might have been too complacent too soon in fading recession risks on expectations of a more accommodative monetary policy stance."

Translation: The view that the Federal Open Market Committee (FOMC) will only need to raise the fed funds rate to 3.25% or 3.5%, which was the basis for the July rally, is incorrect.

Are the Goldman strategists just being spoil sports, or do they have a legitimate point?

Consider that the Fed and other central banks have taken a mostly accommodative stance since 2008. This means that many market participants have never experienced a Fed that was focused on fighting inflation. They only have seen the U.S. central bank act as a source of liquidity. They assume that when the economy falters, the Fed will ride to the rescue. It's all they've ever known.

That's why bad news has been good for stocks in recent weeks. The assumption is that the worse the economy gets, the sooner the Fed will switch to an accommodative stance.

Technically speaking, the U.S. Dollar Index is the key to the stock market rally. Recently, the dollar (UUP, green) pulled back from multiyear highs as stocks (SPDR S&P 500 ETF (SPY) , blue) climbed. Notice how they move in opposite directions. 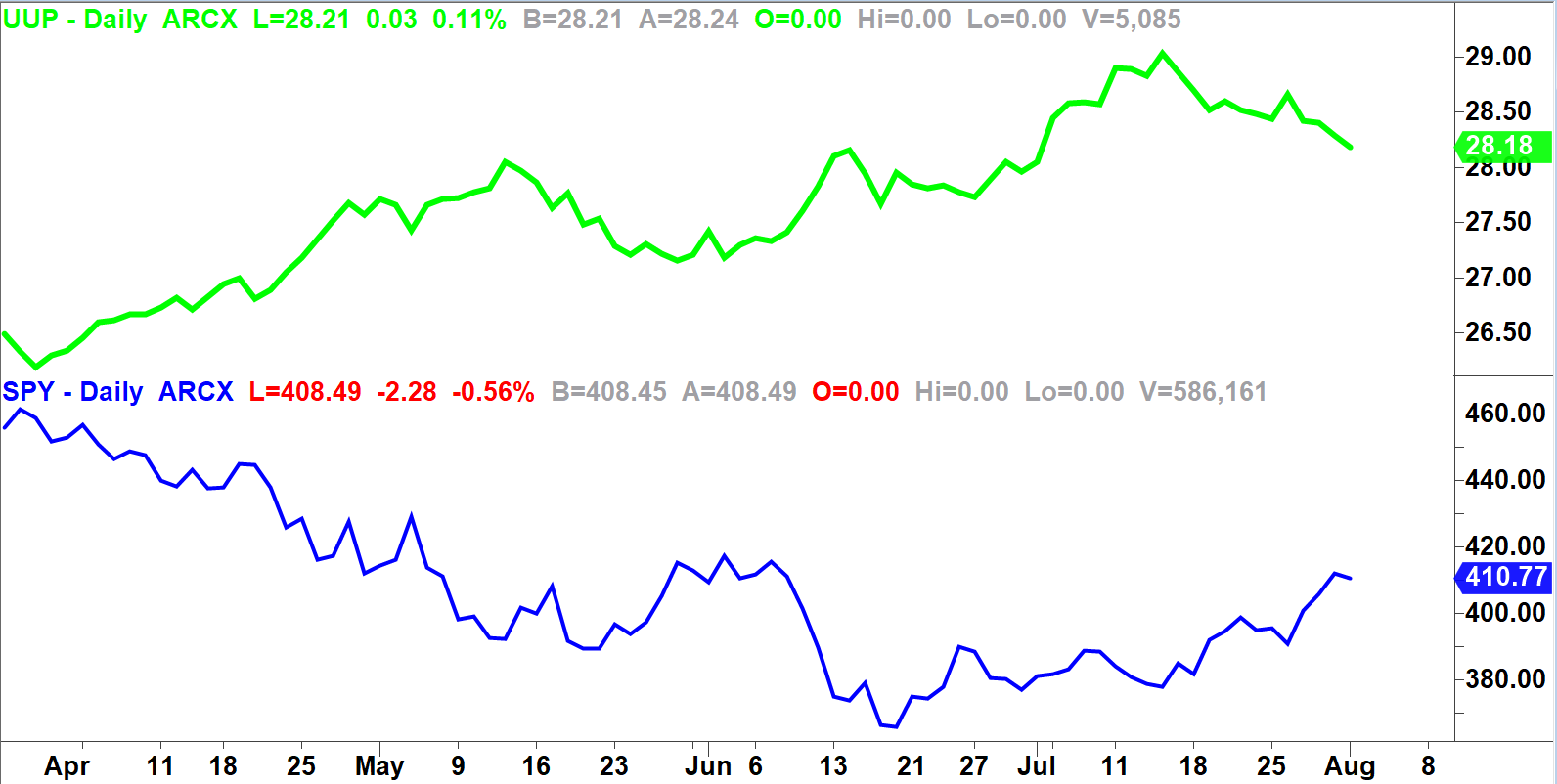 This is normal market behavior, as a flight to safety pushes money toward the dollar. When investors are feeling risky and frisky, they sell dollars and buy stocks.

Is that flight to safety over, or just on pause? We'll know soon. Right now, the greenback is testing its bullish trend line (arrow). 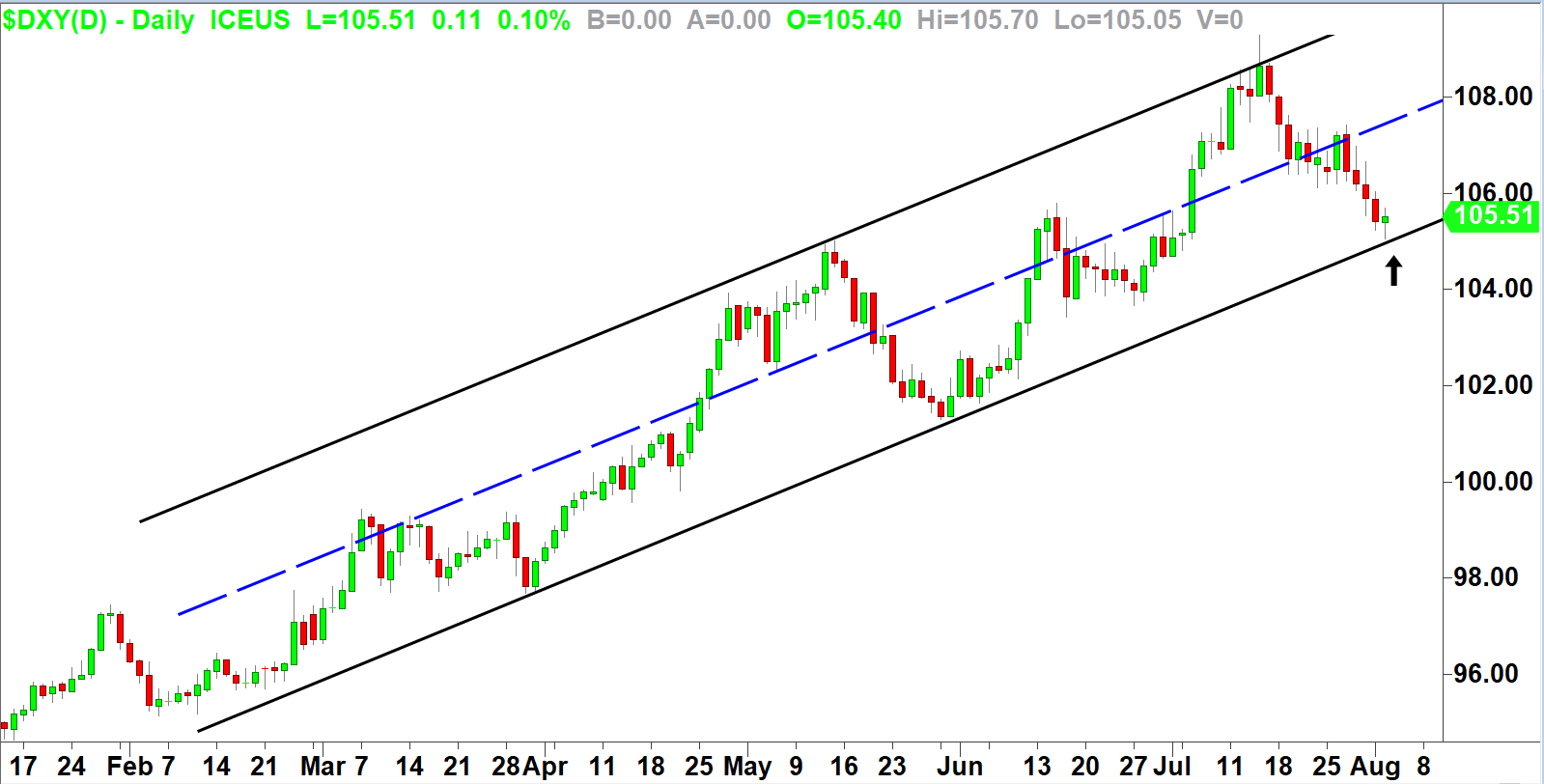 If the trend line breaks, signaling dollar weakness, investors are embracing risk. Stocks should move higher. If the line holds and the dollar strengthens, it could signal the end of the rally.

Market participants are choosing to ignore Fed Chairman Jerome Powell's more hawkish comments regarding his resolve to fight inflation. There is little discussion about Powell's praise of former Fed Chairman Paul Volcker, who famously defeated inflation in the 1980s by raising the fed funds rate to 20%.

Volcker succeeded in crushing inflation. In doing so, he also crushed the economy. Investors need to consider the possibility that Powell's actions could lead us down a similar path.

Get an email alert each time I write an article for Real Money. Click the "+Follow" next to my byline to this article.
TAGS: Currencies | Federal Reserve | Indexes | Investing | Stocks | Technical Analysis | Real Money | U.S. Equity

Look for Further Digestion of the Market's January Gains

Here's our latest look at the market's charts and data.

It becomes more difficult to doubt this rally by the day. Still, I remember very tough Februarys that have followed strong Januarys.

Will Earnings Be the Catalyst That Produces the Next Market Pullback?

The meat of earnings season starts Tuesday, and we will find out soon enough.

As Market Bounces, Plenty of Non-Believers Remain on the Sidelines

Demand for equities overtook supply as Fed fears seemed to relax a bit.