Earlier this week we talked about some subtle shifts in the market. One was the fact that breadth had begun to take a back seat as had the small caps. Another was the minor uptick in stocks making new lows. Now I have a pattern that has shifted a bit. Friday would tell us more.

Since the final days that headed into the December low, the S&P has not been red three straight days. It went three this week. I realize this week looks nothing like late December but it's a pattern change. Having gone two months with buyers stepping to the plate aggressively enough to never get three red days in row, we have done that now.

Then there is Friday. The S&P has only been red one day since the calendar turned to 2019. And the one day it was red was by a mere 38 cents which may as well have been green. So Friday is a little test for the market. Not only is it the first day of a new month (often a green day) it would be the fourth red day if it closes that way, and the first (okay, second) red Friday.

Again none of this is significant but it is another subtle change in the pattern should it occur. And it's small changes that eventually change the indicators. In a fast-moving market changes occur rapidly because the market is moving so quickly but in a slow-moving market, the shifts can be much more subtle.

What we had on Thursday was breadth outperforming the S&P. Net breadth lost a mere 300 issues while the S&P lost nearly 8 points. However, the fact that breadth has been red four of the last six trading days means the McClellan Summation Index is rolling over. I realize it's not terribly easy to see but it really has stopped going up and is starting to curl over. It now needs about +900 advancers minus decliners to get it turning back up. As a reminder, this indicator tells us the direction of the majority (not all, just the majority) of stocks.

On the sentiment front, we had some giddiness late last week when the Daily Sentiment Index tagged 88. Also the ISE ratio went to 151% and the put/call ratio for the VIX sunk. Well the latter was not giddy but a change in sentiment. Now we have the American Association of Individual Investors' weekly survey with bears at 20%. They haven't been this low since mid May last year. Clearly that's a change. But if we look at this indicator on a four week moving average you can really see the move toward complacency. 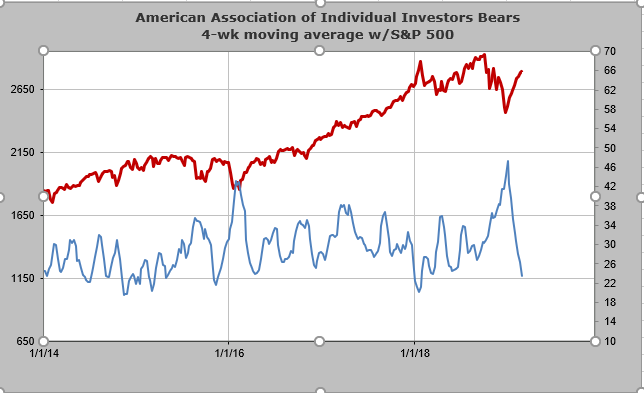 On a more upbeat note the number of stocks making new lows did not increase on Thursday. Also the Transports, which have been the weakest link while red have still not broken the uptrend line (which they would do at 10,400).

It's hard to like a market with sentiment complacent and breadth getting sloppy. But so far the selling has been minimal.

I think DIS will make a run at $160 at the beginning of December.

Here's What I'm Trading Amid the Rotational Action

Can growth stocks and small-caps bounce back from a drubbing?

While market breadth remains negative with mixed charts, the data has become a bit more encouraging.

I have to admit that I deployed a good bit of cash on Tuesday, far more than I expected to during Thanksgiving week.