Does the market ever surprise you? If it doesn't then I'd be shocked.

One of the biggest surprises to me lately is not the breakout in gold but that despite the fact that the whole world sees it and sentiment is beyond exuberant, it keeps on going. But okay, when something breaks out of a multi-year base I guess I shouldn't be too surprised.

Here is a 20-year chart so you don't see the daily or even weekly nuances. The base measures to the $1500 area. I think it should pull back, but it obviously doesn't care what I think.

But the real surprise to me is the U.S. dollar. It has done an entire about face from where it was in late April and again in late May. Remember when it was up there everyone screamed breakout? The Daily Sentiment Index was 91 for the buck in late April and tagged 90 again in late May. This is a perfect example of why I don't chase when the DSI is over 90. Even if it doesn't come down, typically it isn't going up that much more.

But here we have the dollar breaking a very solid uptrend line, having fallen 5% in almost a month and there is so little chatter on it. Oh sure, here and there we see folks mention it but if I told you the DSI is a mere 56 would you be surprised? I know I am. I surely expected it to be at least in the 30s by now.

The Dollar Index has support as it gets to that blue line so it should be oversold enough to bounce but as you can see rallies back to that black line look like they should fail. They big question is if the Dollar Index rallies, will gold pull back? If that doesn't happen I will be more than surprised, I will be shocked.

Away from that stocks are enjoying a pullback since getting overbought with a shift in sentiment late last week. What surprises me about this? The put/call ratio which for nearly three weeks of rallying refused to drop much under 90% now can't get back over 80%. The last three days, despite two of them being red days for Nasdaq and the S&P and the Russell 2000, have seen put/call ratios in the 70s. What happened to all that fear?

Sticking with sentiment, I have to share this data point with you. There is a website that I must have had bookmarked from years ago because I haven't looked at it in years but I inadvertently clicked on it Monday to discover their sentiment survey shows rampant bullishness. And I mean euphoric. When bulls are 70% and bears are 13%, and they weren't there in late April, these folks have jumped the fence. 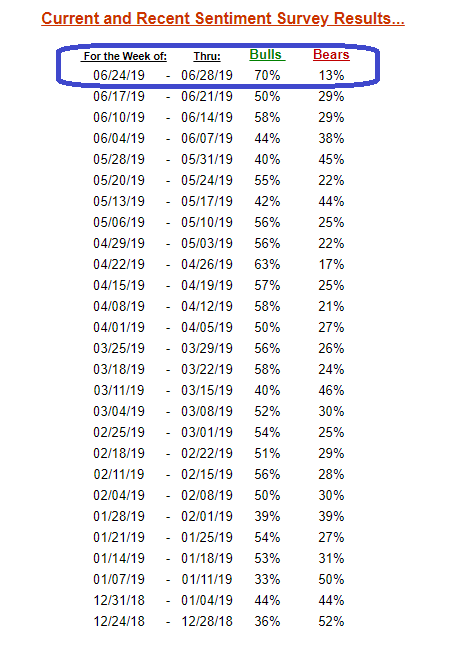 I wish I could tell you more, but I cannot remember their methodology. I cannot find who gets to vote or how often, or even when polling ends. So I cannot tell you how this differs from any other survey, just that it got extreme for this week. The name of the site is tsptalk.com.

Get an email alert each time I write an article for Real Money. Click the "+Follow" next to my byline to this article.
TAGS: Investing | Stocks | U.S. Equity

We are going to live again. You will dance in the aisle at some concert whose performer I have never heard of, and you will cheer for your favorite team in person again.

There is a reason that there are just 30 Dividend Kings in the market.

What you have seen over several weeks is a market reacting to improved prospects for increased fiscal support reliant upon deficit spending.