There are those in the market who are trend players. Momentum fans. They are keen to react as soon as the market turns. Then there are those who watch the market's internals and look for divergences. These folks tend to be more anticipatory. I am the latter.

And being anticipatory means your timing will rarely be spot on. More often than not the divergences will start to crop up well before the market indexes care or react to it. It also means I run a higher risk of being wrong because divergences can right themselves.

We have had minor divergences in the market for about two weeks now. It started when the number of stocks making new highs tailed off. Then we had breadth still okay but not as good. Then breadth began to weigh on the McClellan Summation Index and that rolled over last week.

A word about the Summation Index. I often say it represents what the majority of stocks are doing and that's because it is the (sort of) second derivative of the cumulative advance/decline line. It requires a lot more to turn it up or down than just a day or two of breadth. When it is rising it is much easier to find stocks to go long. When it is declining, that becomes a much harder task because the majority of stocks are heading down.

The best news from the Summation Index comes from this. It will now take a net differential of +1700 advancers minus decliners on the NYSE to reverse the decline. Typically once it gets to more than +2000 it has stepped a toe into oversold territory on a short-term basis.

You can see my own Oscillators are pushing their way back to oversold territory because breadth has been so weak.

On Monday we had our largest divergence yet in the market. The S&P closed up 3 while net breadth on the NYSE was -550 issues. Compare that to last Wednesday when the S&P fell just over 6 points and net breadth was -550. I actually praised that, noting that breadth could have/should have been much worse than that for a down 6 day. There is no way I would praise Monday's breadth because there is nothing good in this data.

Then there is Nasdaq where the index made a new recovery high on the lightest volume of the year. I am not terribly concerned about the volume until it drops to a big extreme on a 20-day moving average but it is certainly on the problematic side of the ledger. What concerns me more is the health of the Nasdaq market.

It is not healthy to have Nasdaq at a new high when there are more new lows than new highs, yet that is exactly what has transpired for the last two trading sessions. My friend Jason Goepfert of Sentimentrader.com even compiled a chart showing that this is rather infrequent. I suppose if you are of the mind that this is like the late 90s, then full steam ahead, otherwise, you can see it led to corrections.

So you can wait and be reactionary or you can plan ahead and be anticipatory. Or you can figure the divergences will clear themselves up. It's a choice. 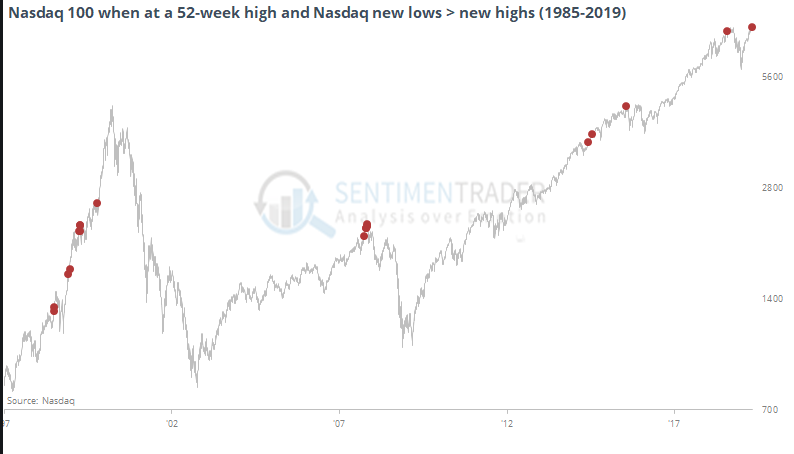 Is Defense recession proof? Not in 'normal' peacetime, but maybe this time.