Last month's better than billion-dollar lottery jackpot attracted a lot of attention. Twenty-seven drawings with no winners, on worse than a 1 in 302.5 million chance MegaMillions drawing, which made for that large payoff when someone finally hit. 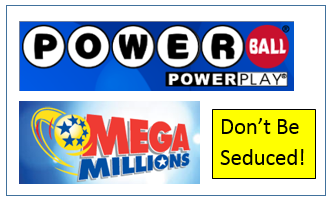 Take a quick glance at the statistics from the five states where people spend the most money on tickets. That tells the very sad story.

Massachusetts has the highest-ticket players. They average over $925 per year in ticket sales, a cool $17.80 per week.

Even the best payouts delivered back only 72.69% of the money "invested." Delaware's lottery buyers got the worst deal, recovering only 27.2 cents for every dollar of tickets purchased.

It's true that eventually someone's going to win the big prize. Statistically, though, these lotteries are for losers only. 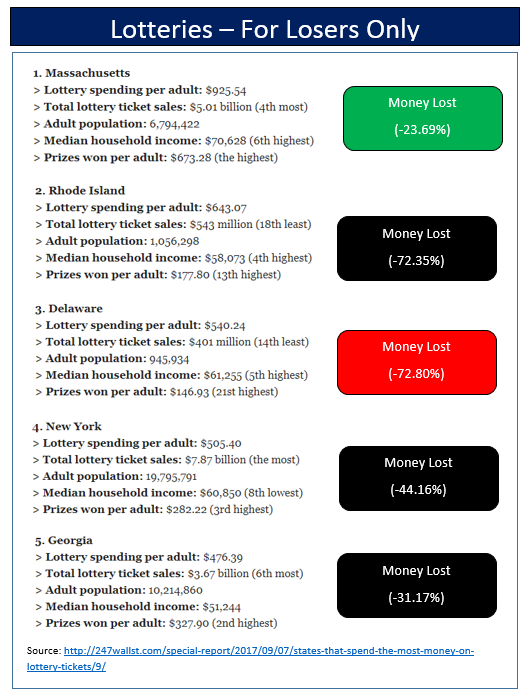 Suppose those Massachusetts lottery players simply took that cash and funded a tax-free Roth IRA with that $17.80 per week. After 40 years, at an average 8% return, they'd have accumulated a very nice nest egg of almost $270,000. 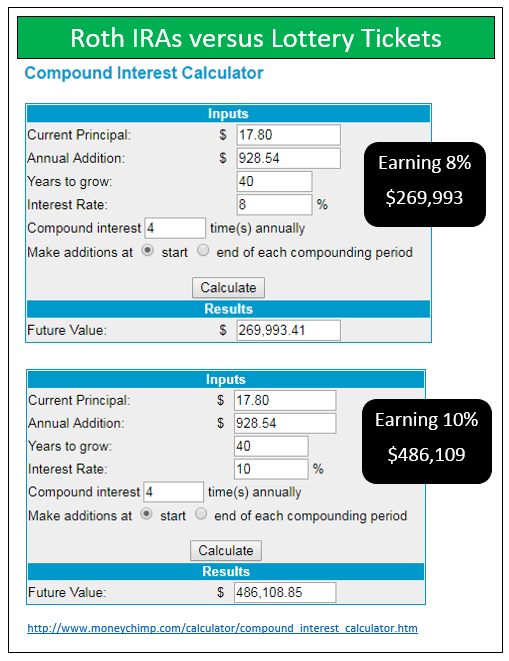 If, rather than hoping for that 1 in 280 million chance to become lottery millionaires, they simply had the good fortune to earn 15% annualized, their Roth balances could reach well over $2.3 million, just on that same $17.80 per week.

That's a "hope and dream" that might actually come to fruition for many people. 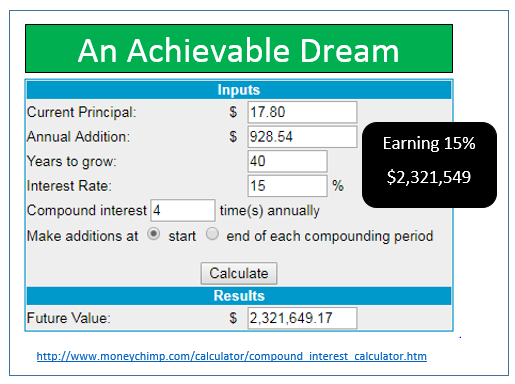 How good are those very attainable goals? Even the worst of the examples would leave a person with well more than the average 70-year old's IRA balance of about $220,000. Note, too, that the projected totals came after just 40-years of saving. People who start Roth IRAs at age 20 could be at the levels shown just by age 60. 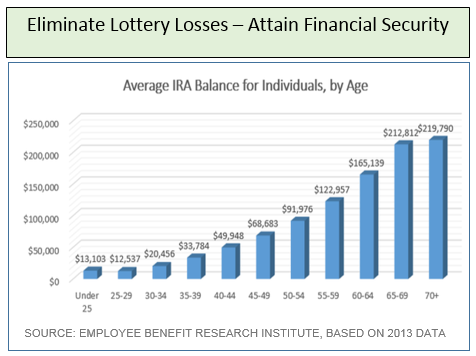 Thrill seekers unable to kick their gambling habits could achieve the same results by giving up a drink or two at a bar each week, or perhaps three specialty coffees from their morning Starbucks (SBUX) runs.

Change your mindset. Get away from seeking a tiny chance at a ridiculously large, but unlikely way, to realize wealth. That one adjustment, diverting the cash saved into a Roth IRA account, can give you the high probability outcome of becoming financially secure for life.

Take yourself off the sucker list and get onto the path to millionaire status. Doing that is easier than you think.

This commentary originally appeared on Real Money Pro on Dec. 7. Click here to learn about this dynamic market information service for active traders and get daily columns like this from Paul Price, Doug Kass, Bret Jensen and others.

Get an email alert each time I write an article for Real Money. Click the "+Follow" next to my byline to this article.
TAGS: Personal Finance | Savings | How-to Spend | Investing | Investing basics | U.S. Equity

Check Both Directions Before Crossing a Moving Average

Moving averages are a great technical tool, but there's a key part of them that most commentators and investors miss.