Thus far the market is doing what it is supposed to do, or at least what we thought it would do this week. Time will tell if it can keep reading our script and playing it out.

Just when everyone was complaining loudly about breadth, breadth improved. And that means the Overbought/Oversold Oscillator finally lifted so that you don't need a NASA-powered scope to see it.

I did something different on the chart today. I placed two dots. Keep in mind this is based on the 10-day moving average of the net of the breadth of the market. One of the reasons I thought it would lift this week is because we were due to drop at net breadth reading of -1000 on Thursday and on Friday we will drop -1650.

In order to see the Oscillator move lower we would have to have net breadth worse than those two readings and with Thursday being the first day of the new month, which you may recall I noted earlier this week, that breadth had been decidedly positive on every first day except January, it seemed likely breadth would be positive.

Back to the chart. The Oscillator moved up. The red dot represents where it should end the day on Friday if net breadth is +500. The green dot is if it is +1000. That's how we can see the Oscillator move to an overbought condition by the end of this week. Beginning next week we'll start dropping positive numbers which are harder to beat and therefore make the market overbought. Keep in mind that the S&P is now on a six day winning streak so an up day on Friday would take this into overbought territory based on price as well.

None of the other breadth indicators have changed though. The McClellan Summation Index is still heading down, although it is finally within reach of turning up. Net breadth of +200 would do that. It's quite late but that would be a change.

And the number of stocks making new highs hasn't budged either. That too remains lethargic. New lows are quite mild though, although Nasdaq has seen a minor rise, but they are not yet over 50.

Then there is sentiment. The American Association of Individual Investors (AAII) bulls jumped 8 points this week to 48% so they are back to bullish. 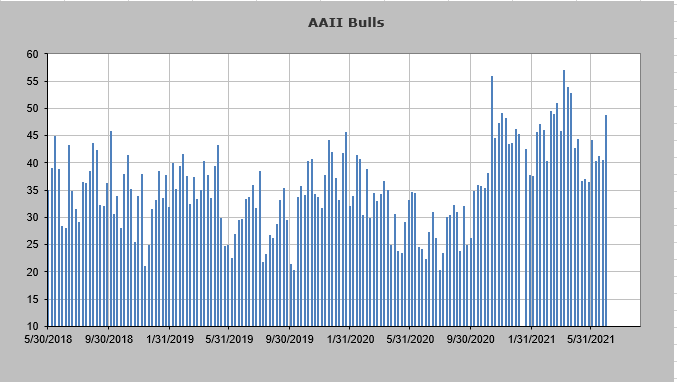 The National Association of Active Investment Managers (NAAIM) saw their exposure jump 21 points from 70 to 91. I would call 91 on the high side, although not extreme. But it surely isn't the 70 reading we had a week ago, is it? Cash has been put to work. 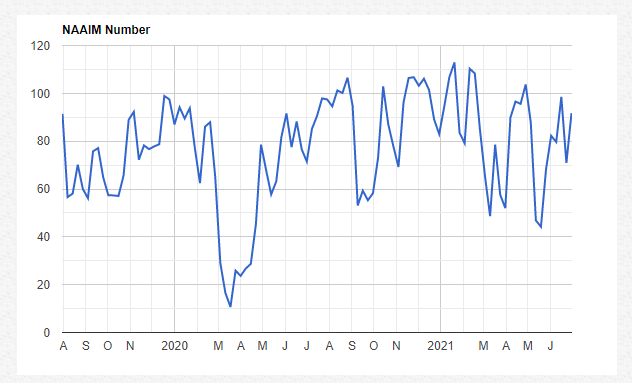 Finally there are the Daily Sentiment Index DSI) readings which now stand at 88 for Nasdaq, 87 for the S&P and 19 for the VIX. If the Employment number gives the market a lift I expect these will get at/near an extreme at the end of trading on Friday. And that would couple with the overbought reading as we head into early July.