For Upstart Holding (UPST) , the stock price apexed at $401.49 on 15 October of last year. Last night, the shares closed at $33.74, up 1.96% for the day, and down 91.6% from the high of the day on October 15th. The shares were trading about 17% lower overnight, trading with a $27 handle after issuing a press release after that close that warned on second quarter revenue as well as expected net loss. This is that tale.

Upstart Holdings is expected to release Q2 financial results on Monday, August 8th after the closing bell. That has not changed. What has changed is that the firm now sees Q2 revenue around $228M after having previously guided toward $295M to $305M. The firm also sees net income for the quarter in a range spanning from $-31M to $-27M, which is down from prior guidance of $-4M to $0. If there is a bright side, it is in the expected contribution margin (selling price less variable costs). which is now seen at a rough 47%, up from approximately 45%.

What Does Upstart Do?

I know that at least a few of you asked this question in your head. Upstart is a cloud-based artificial intelligence guided lending platform. The idea is to aggregate consumer demand for loans and connect to its network of banking and credit union partners. The firm's application is designed to integrate seamlessly into a bank's existing technology. Each bank can then configure its own credit policy and determine the parameters for its individual lending program.

Upstart believes that its AI platform can better assess credit quality than can traditional metrics. These personal and auto loans are then sold to institutional investors and other buyers in aggregate who then often securitize these loans. This gets loans made off of the firm's balance sheet, which allows the firm to continue originating new loans.

Obviously, the highly liquid, Fed fueled economy of the past few years was a better environment for a still young operation like this to operate than the tighter, less liquid environment of the present and probably short to medium term future. At least.

In the press release, co-founder and CEO Dave Girouard comments, "Inflation and recession fears have driven interest rates up and put banks and capital markets on cautious footing. Our revenue was negatively impacted by two factors approximately equally.

First, our marketplace is funding constrained, largely driven by concerns about the macroeconomy among lenders and capital market participants.

Second, in Q2, we took action to convert loans on our balance sheet into cash, which, given the quickly increasing rate environment, negatively impacted our revenue."

Also from the press release, CFO Sanjay Datta stated, "For loans purchased by non-bank institutions, all vintages from 2018 through 2020 delivered significant excess returns, while our 2021 vintage is within 100 basis points of our loss expectations. Lastly, we believe our models are well calibrated to economic conditions and are currently targeting returns in excess of 10 percent."

I see two sell-side analysts of note that have reacted to this warning since last night. Nat Schindler of Bank of America, who is rated at five stars by TipRanks, maintained his "hold" rating on UPST, while taking his target price down to $34 from $41. Elsewhere, Vincent Caintic of Stephens, who is rated by TipRanks at three stars, was less kind. Caintic kept his "underweight" rating on UPST, which is a "sell" equivalent, as well as his $28 target price, while stating that the firm's revenue trajectory "will get worse from here" as he forecast further deceleration in transaction volume for the firm's second half.

Okay... the second quarter was awful. The market will price that in on Friday. The firm was profitable as recently as Q1. This name has not been one of these insanely priced growth stocks. Well, at least not lately. Ahead of this warning, UPST was trading at just 18 times forward looking earnings. Of course that changes as earnings will not be what they were, but neither will be the last sale.

Upstart had been growing revenue in triple digit percentage terms for four consecutive quarters. That's over. Take a look at the books. Okay, negative free cash flow for Q1 ($-3.23 per share), and that will be worse for Q2.

That said, the firm had $758M in cash and equivalents on the balance sheet at the end of Q1 and another $255M in restricted cash. Current assets printed at that time at $1.617B, versus current liabilities of just $103M. That means, that at least for now, Upstart can probably survive a couple of kidney punches. We really are going to need to see how this balance sheet evolved through the end of Q2. We won't though, until August 8th. The firm had $769M in long-term debt on the books as well. We'll need to see this item as well.

What I am telling you, is that UPST is down and deservedly so, but that UPST at this discounted value has possibly started to become investable. Maybe. I know that's a bit wishy-washy, but I really need to see Q2's income statement, statement of cash flows and balance sheet prior to making a more informed judgement. 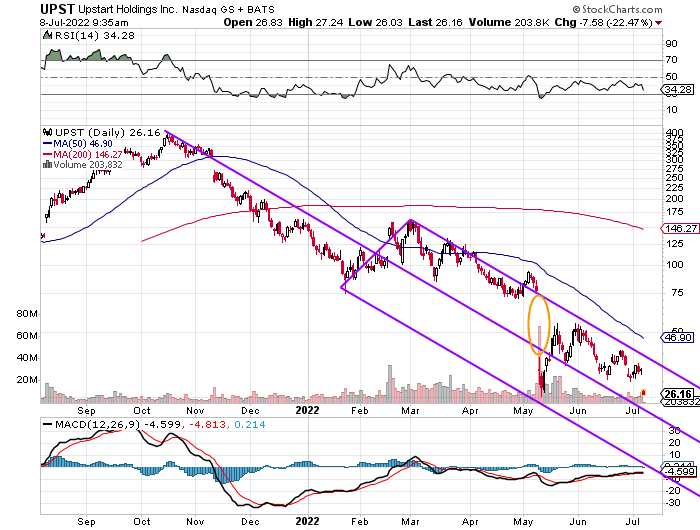 Technically, you will not find too many charts worse than this one. The stock shows almost no hope of breaking out of a downward sloping Pitchfork model in place since that October high, especially now. There is still that partially unfilled gap created in response to Q1 earnings. The stock needs $76.23 to fill that gap. Fat chance. Fat chance any time soon, anyway.

I am not thinking about grabbing any equity in this name today. However, selling discounted equity risk is something all together. Write an August 12th $22 put for $3. or an August 12th $20 put for $2? That sounds interesting. I mean would you be willing to get paid to potentially have to pay a net $18 for UPST in a month? That's the question.

Get an email alert each time I write an article for Real Money. Click the "+Follow" next to my byline to this article.
TAGS: Earnings | Economy | Investing | Stocks | Technical Analysis | Trading | Financial Services | Fintech | Software & Services