In another "Executive Decision" segment during Wednesday's Mad Money program, Jim Cramer spoke with John Riccitiello, chairman, president and CEO of Unity Software (U) , the engine behind most of the 3D applications available today.

Riccitiello explained that Unity provides tools so that developers can build new ways to experience the world. Their journey began with gaming, but has since expanded across industries to include shopping, construction, manufacturing, and sports.

The Unity engine is what powers 70% of all mobile gaming experiences, Riccitiello said. It provides the physics, lighting and UI layers and renders them all into a seamless, high performance experience. That's why Unity powers over two-thirds of all augmented and virtual reality experiences.

Unity has the ability to ingest real time data from multiple cameras and then rebuild a virtual world based on that data, all in real time. The possibilities are endless, he said, as they allow consumers to view the world on any device.

Cramer said the 3D market is owned by Unity. Sounds like a bullish story so let's see what the charts can add to the mix.

In this daily bar chart of U, below, we can see that prices made a low in May as part of a basing pattern from March through July. Prices have started a new advance and trade above the rising 50-day moving average line and above the 200-day line. We can see a recent bullish golden cross of the 50-day and 200-day averages.

The On-Balance-Volume (OBV) line bottomed in May/June and its rise tells us that buyers of U have been more aggressive. The Moving Average Convergence Divergence (MACD) oscillator is above the zero line but temporarily pointed down.

In this weekly Japanese candlestick chart of U, below, we can see a hammer pattern in early May to mark the low with a bottom reversal pattern. Recent lower shadows below $130 suggest that traders are rejecting the lows and prices could head higher. The weekly OBV line and the MACD oscillator are bullish.

In this daily Point and Figure chart of U, below, we can see a potential downside price target in the $111 area. 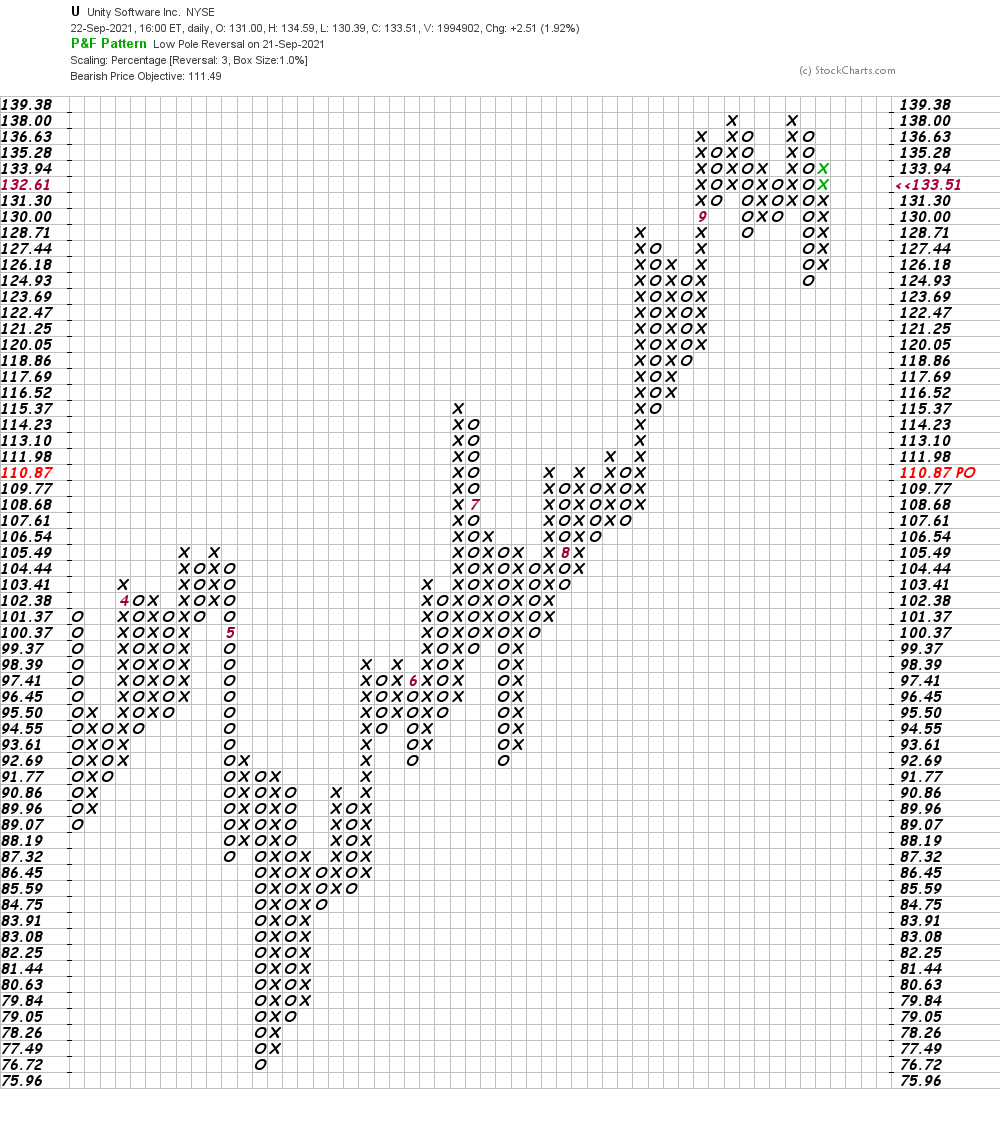 In this weekly Point and Figure chart of U, below, a price target in the $161 area is shown.

Bottom line strategy: Traders could approach the long side of U around current levels risking down to $115. On the upside we could see a rally to the $161 area in the fourth quarter. Note: I saw a 3-D chart of interest rates in the Fidelity chart room way back in the 90's. Way ahead of things.

Get an email alert each time I write an article for Real Money. Click the "+Follow" next to my byline to this article.
TAGS: Investing | Stocks | Technical Analysis | Trading | Software & Services | Technology | Mad Money

Reasons to Invest in Waste Management Are Piling Up

At least according to the charts, which show continuing strong performance from WM.