Tuesday will get even busier with United Technologies Corp. (UTX) reporting after the close, advised Jim Cramer during his "Mad Money" program Friday night. Let's see if the charts and indicators give us any hint of direction.

In this daily bar chart of UTX, below, we can see some "interesting" patterns.

Prices made a V-like bottom in late December, after more than a $40 decline. UTX rebounded from January to late April, to retrace the entire decline, or correction. Another correction unfolded from early May to the middle of June, but prices have been slow to regain their former peak and have yet to recover the half-way point.

Trading volume looks like it declined from December to early June, which is not bullish -- but the On-Balance-Volume (OBV) line rose in January and February and since then has been steady. A new high from the OBV line would be a positive, should it happen. The Moving Average Convergence Divergence (MACD) oscillator recently moved above the zero line for an outright go long signal, but it really has not signaled a strong buy yet.

In this weekly bar chart of UTX, below, we can see two trends -- one is the uptrend from 2016 to the middle of 2018. The second is the wide-swinging, sideways trend. Prices are above the 40-week moving average line now, but the slope of the line is negative. The weekly OBV line has roughly mirrored the price action, but notice that the OBV has been weaker in April this year when compared to the prior rally up to the $140-$145 area last year. The MACD oscillator is above the zero-line, and could be poised to cross to the upside for a fresh buy signal.

In this Point and Figure chart of UTX, below, we can see that the software is projecting a downside price target of $116.74. A rally to $136.63 is needed to make this chart more positive. 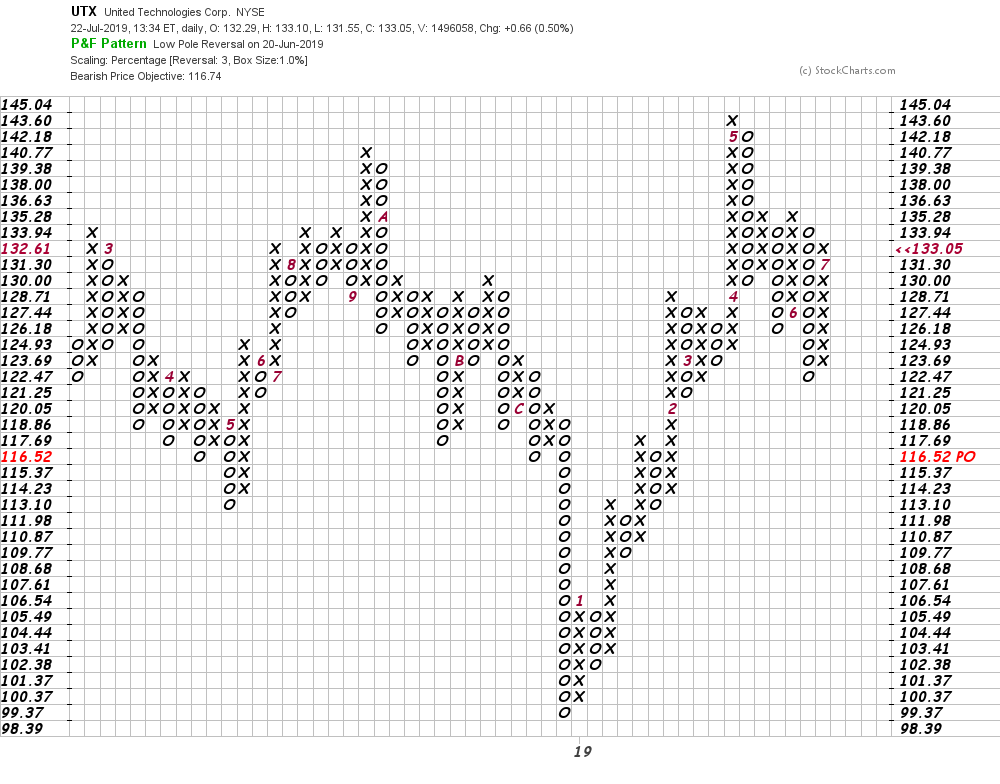 Bottom line strategy: The indicators on UTX are mixed so Tuesday's earning's report could tip the scales. I think the safest position will be no position ahead the release.

Get an email alert each time I write an article for Real Money. Click the "+Follow" next to my byline to this article.
TAGS: Earnings | Investing | Technical Analysis | Aerospace | Mad Money