United Technologies (UTX) has declined since late September. I am not a fundamental investor but I can imagine that investors and traders in UTX have probably been reacting to the news flow like tariffs, trade tensions, a stronger dollar, China slowing, and that the company has decided to divide itself into three independent companies.

Too confusing to me so let's just stick to the charts and technical indicators.

In this daily bar chart of UTX, below, we can see a large, mostly sideways trading range the past 12 months. Dips to and below $120 have been bought while rallies to $136-$138 and above have been sold.

The 50-day moving average line has moved sideways and the 200-day average line rose until October and has turned lower.

The daily On-Balance-Volume (OBV) line has trended sideways too but has softened the past two months.

The trend-following Moving Average Convergence Divergence (MACD) oscillator is below the zero line and pointed lower.

In this weekly bar chart of UTX, below, we can see a strong rally from early 2016 to September 2018. In the past two months UTX has declined below the 40-week moving average line and the line has turned lower.

The weekly OBV line shows a fairly steep decline from the middle of September suggesting that selling has turned pretty aggressive.

The Moving Average Convergence Divergence (MACD) oscillator made a lower high in September even though prices made a higher high. Now the MACD oscillator is close to crossing the zero line for an outright sell signal.

In this Point and Figure chart of UTX, below, we can see a possible downside price projection or target of $108.51. The volume at price bars on the left side of the chart show potential support in the $118 -$113 area so UTX may not decline so much. 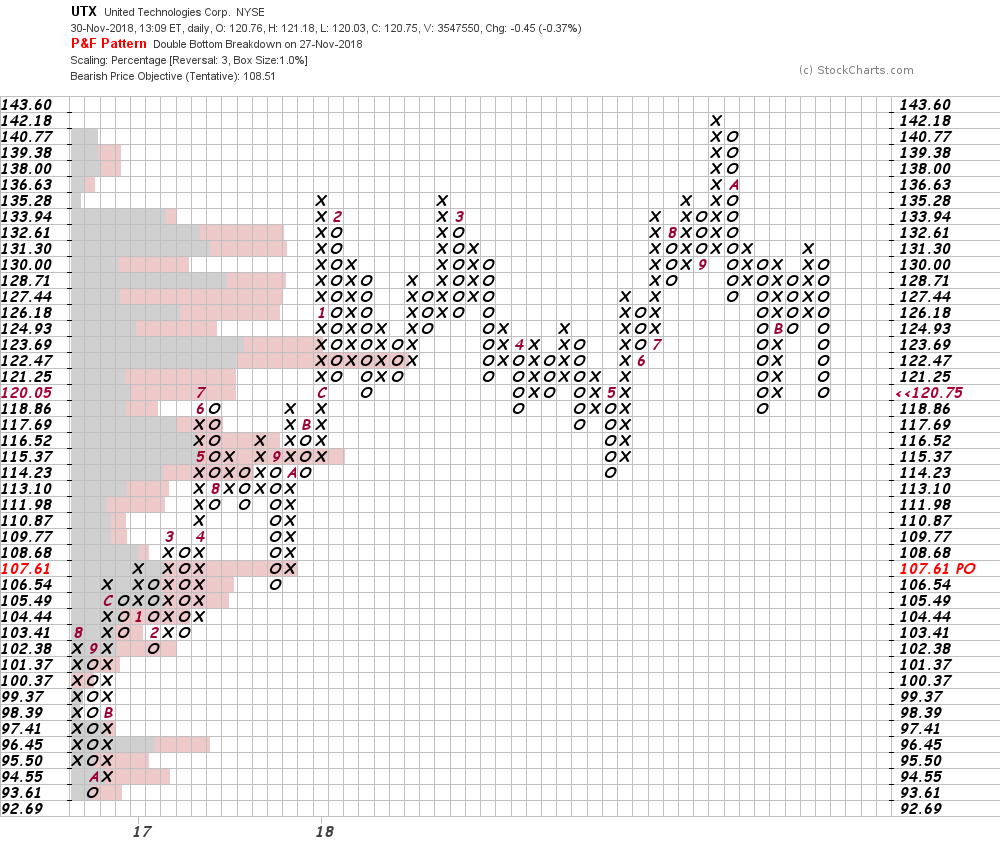 Bottom line strategy: While some of the charts and indicators of UTX look bearish they are not all that negative. I don't currently think we are looking at a major top formation but one can always be surprised. UTX could improve into year-end but I would not anticipate new highs.