Let's check out the charts of UAL on our way to the gate.

In this daily bar chart of UAL, below, we can see a rally from June/July to late November followed by a sideways trading range. From October someone has been buying dips on UAL in the $80-$77 area. Rallies to the $90 area failed in February and again in late April and early May.

UAL is likely to breakout of this sideways range at some point in time - the question is in which direction. Prices are below the declining 50-day moving average line and below the flat 200-day line.

The daily On-Balance-Volume (OBV) line was positive until early December and then it turned neutral.

The Moving Average Convergence Divergence (MACD) oscillator has been crisscrossing the zero line the past year.

In this weekly bar chart of UAL, below, we can see the sideways trading range with prices below the cresting 40-week moving average line.

The weekly volume bars look like they have been declining the past 12 months and the weekly OBV line looks like it has been drifting lower the past year.

The MACD oscillator is hugging the zero line recently. Further weakness looks more likely than a turn to the upside.

In this Point and Figure chart of UAL, below we can see the sideways price action with more X's and O's in the lower half of the pattern. A longer term upside price target of $114 is being indicated. A decline to $76.72 would weaken the charts. 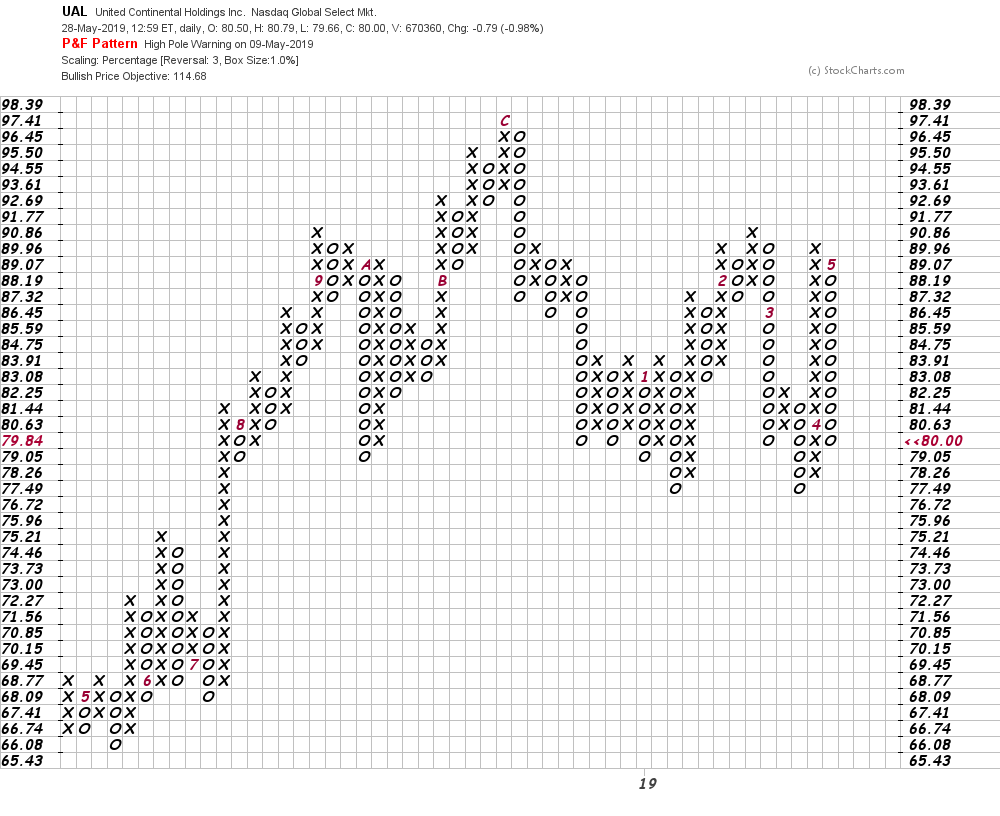 Bottom line strategy: I prefer to buy strength as opposed to buying a dip, and for UAL I would wait for a rally above $86 before going long and would add to longs above $90. Risk below $78.

Get an email alert each time I write an article for Real Money. Click the "+Follow" next to my byline to this article.
TAGS: Investing | Stocks | Technical Analysis | Trading | Airlines | Mad Money