In his first "Executive Decision" segment of Mad Money Tuesday night, Jim Cramer spoke with Lance Fritz, chairman, president and CEO of railroad operator Union Pacific Corp (UNP) . Shares of UNP are up 41% over the past six months, including 7% this week after the company reported another strong quarter.

Fritz started off by saying that Union Pacific is celebrating its 150th anniversary as a publicly traded company on the NYSE. Not many companies can boast about that kind of legacy and commitment to their shareholders and employees.

Fritz added that their continued strong results come from operating their railroad for maximum efficiency. They are constantly improving and reducing costs, and lower costs open up new opportunities and new markets that rivals cannot match.

When asked about their business, Fritz explained that Union Pacific is seeing strength in several areas, including e-commerce parcels, intermodal shipments, and chemicals and plastics. They continue to see weakness in energy, mainly oil, gas and coal-related shipments.

In this daily bar chart of UNP, below, we can see that prices were in an uptrend until late February when the broad market began its pandemic decline. Prices were not quite cut in half before the bottom around the middle of March. UNP rallied back in surges higher until June when it retraced its entire decline. Prices corrected sideways from June to the end of July and then resumed the advance to new high ground.
UNP is above the rising 50-day moving average line as well as the positively sloped 200-day moving average line. A bullish golden cross of these two averages can be seen in early July.
The On-Balance-Volume (OBV) line was stable from March to early July and then turned sharply upwards telling us that buyers of UNP turned very aggressive.
The trend-following Moving Average Convergence Divergence (MACD) oscillator has been above the zero line since April so we know the trend is positive. The oscillator looks like it is turning upwards now for a fresh outright buy signal.

In this weekly bar chart of UNP, below, we can see the price action of the last three years. Prices are in a longer-term uptrend and the breakdown early this year was just an interruption of the trend. Prices are trading above the rising 40-week moving average line.
The weekly OBV line has been steady all year with only a brief dip in March. The MACD oscillator is very bullish and confirms the new price highs.

In this daily Point and Figure chart of UNP, below, we can see the price action without smaller jiggles and without volume and gaps. Prices are in an uptrend and the software is projecting the $208 area as the next price target. Not all that far away. 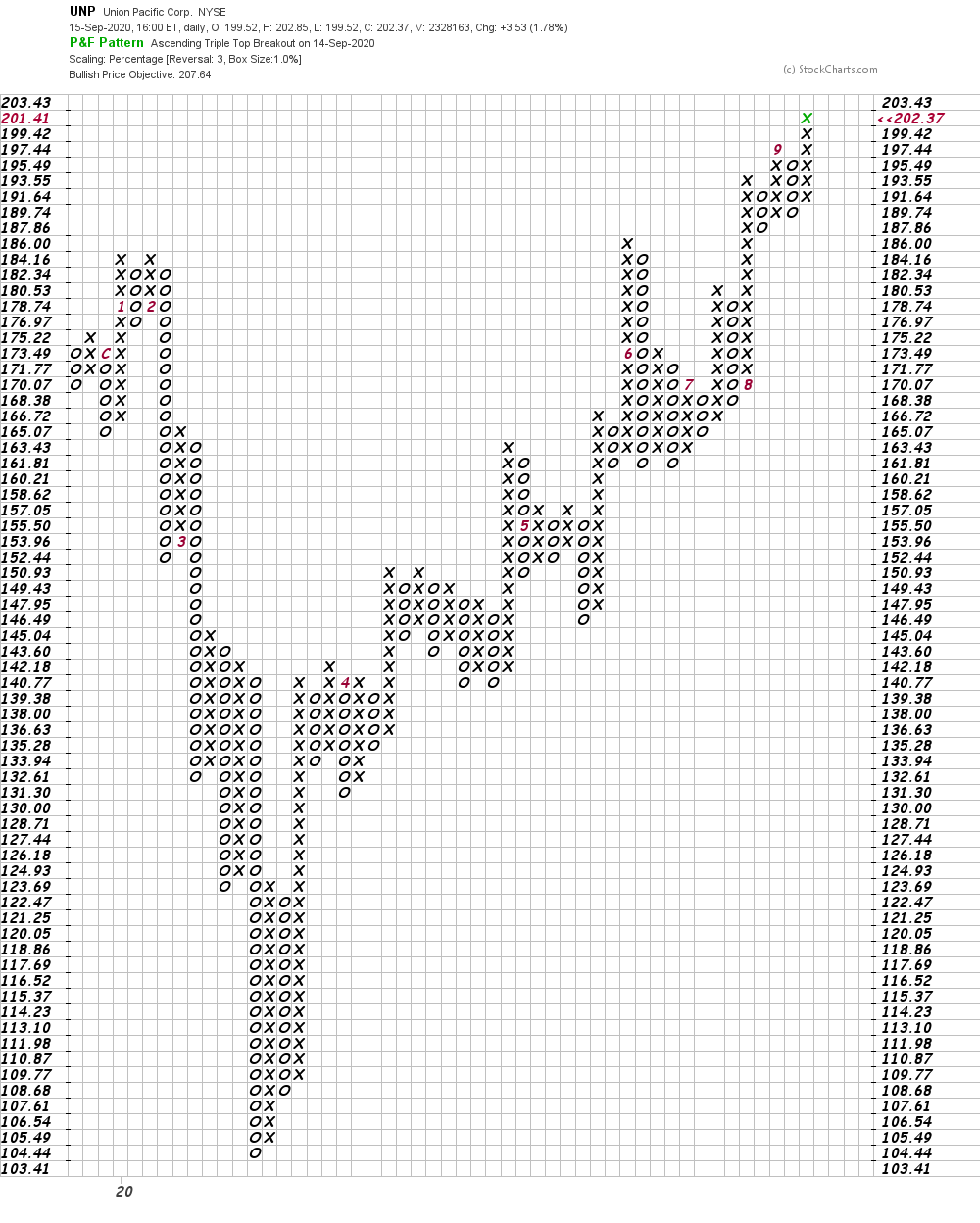 In this weekly close only Point and Figure chart of UNP, below, we can see a price target in the $246 area.

Bottom line strategy: UNP is in an intermediate-term uptrend and a longer-term uptrend. I anticipate both of these trends to continue. Traders could go long at current levels or on a shallow dip below $200. Risk a close below $185. $207 and then $246 are our price objectives.
Get an email alert each time I write an article for Real Money. Click the "+Follow" next to my byline to this article.
TAGS: Investing | Stocks | Technical Analysis | Trading | Transportation | Mad Money | Executive Interview

Let's Get a Second Opinion on Interactive Brokers

Barron's suggests an option play on IBKR, but I see a different strategy.

Tesla Turns Heads, but Let's Check Out the Market's Dashboard

The real story is in the Russell, breadth and these indicators.