Monday. Tough day to understand. The headline grabber would be obvious. Financial media was all over the precipitous drop in WTI Crude futures pricing for delivery in May. Those contracts, that traded well below zero on Monday afternoon, will expire this morning. There was weakness throughout the oil curve, as futures priced for June delivery, which now becomes your front month, have already failed an early test at the $20 per barrel level.

Beyond energy markets and the potential for ancillary fall-out, the S&P 500, and this may be more important from a technical viewpoint, failed to hold that 50 day SMA that we spoke of just 24 hours ago. 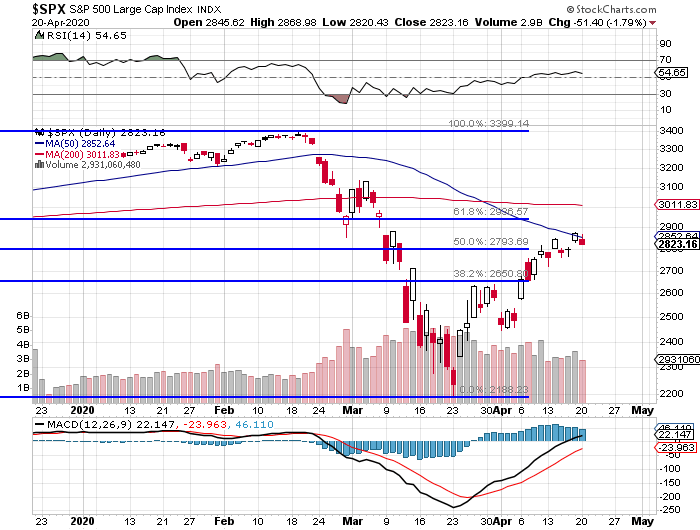 While sudden resistance at that blue line has shown for two consecutive days, which would be a short-term negative, readers might also note the lower trading volume. Easily explainable as a Monday after a monthly options expirations' Friday, but trading volume at least for the S&P 500 was lighter than light. Monday presents as the lightest trading day in aggregate for the index in almost two months. That information could lead a trader toward easily discounting the Monday selloff. That said, I would be slow to do so. I think for now, though technically the trend is upward, we want to remain agile, which me means remaining narrow in scope. Diverse? Yes. Fewer exposures to each area of risk? Also, yes.

The Nasdaq Composite, still giving up about 1% on the day, also experienced a day over day decline in trading volume, but volume was still supportive of rising interest in the subordinate components of that index. The Nasdaq 100 dropped a heavier 1.2%, indicating potential for traders experiencing losses elsewhere to at least think about taking profits where they have them... in information technology. The Select Sector Technology SPDR ETF (XLK) gave up 1.6% for the session, but also on lighter trading volume. For those interested, The Nasdaq Composite, Nasdaq 100, and XLK will still start Tuesday above the 50 day and 200 day SMAs for all three. Of all 11 sector select SPDR ETFs, only Health Care (XLV) also closed above both of these lines on Monday. Holding these lines on early Tuesday pressure could very well be the focus for equity traders.

Even as common sense might call for profit-taking after markets have run so far from the recent bottoms with close to no economy operating beneath that market, there are so many factors still not priced, or fully priced in. Both good and bad. Parts of Europe (Germany?) started reopening their economies in an incremental, baby-steps kind of way on Monday. A number of U.S. states aim to do the same as soon as possible. Maybe this week. Good? Only if we're lucky.

What can we expect from an economic recovery here in the U.S.? My first thoughts, and I hate to be the party-pooper here, but I think it on the aggressive side to start reopening anything prior to truly seeing acceleration on the backside of the now flattened "curve." It does not take a genius to figure out why the curve flattened in the first place. I think it perhaps also aggressive to try returning to something resembling normal prior to the entire healthcare system being able to do so first. Should business get back to usual ahead of the ability of local Emergency Rooms to handle more routine "emergencies"?

I understand that a vaccine for this virus is too far out into the future for the economy to wait that long. I also understand that folks who live in parts of the country that have not been ravaged by this disease don't truly seem to understand how easily they could. How close, not in rhetoric laden optimism, but how close are we truly to being able to test for the virus and the antibodies created broadly? Then, once there is a problem, are we able to effectively implement "contact tracing"? Opening, and then going back into full mitigation strategies could do more harm than good economically, while making reestablishing public confidence that much more difficult down the road upon a second attempt to reopen.

Even if a vaccine remains distant, I would expect that first there would have to be a broad distribution of clinically proven therapeutic treatment for those who do fall ill.

Monetary and fiscal authorities have been about as busy as can be, plugging holes here and there nearly as quickly as they appear. Implementation has been rough in spots, as this effort has been by necessity... a rush job. Even now, so much needs to be done.

Falling oil prices? I see June WTI Crude trading with an $18 handle now. Reuters reported on Monday afternoon that the Independent Petroleum Association of America had asked the Federal Reserve to change the terms of its newly created $600 billion lending facility so that energy companies could bridge existing debt at higher expense into the program.

Word has it that the U.S. Treasury has finalized payroll support agreements with a number of U.S. airlines to include American Airlines (AAL) , Delta Air Lines (DAL) , Southwest Airlines (LUV) , and United Airlines (UAL) .

The Senate met on Monday and will meet again on Tuesday. While all sides do appear to have agreed to add more than $300 billion in additional funding to the small business "Paycheck Protection Program" that ran out of money last week, there will also likely be $75 billion in new funding for hospital support set aside, as well as $25 billion in funds meant to help in the expansion of testing for the virus across the nation. What's the hold-up? It seems it is in the details of how testing will be implemented and in how centrally controlled this testing will be. My guess? This story evolves quickly as the longer it lingers the worse both sides of the aisle appear in the eyes of the American public. This is no time for goofing off, or getting political.

According to the Wall Street Journal, the state of New York has asked the federal government for a $4 billion interest free loan needed to cover the surge in unemployment benefits claimed by those recently losing their jobs due to the pandemic related economic shutdown. New York has plenty of company. The piece states that nearly half of U.S. states have now experienced sizable declines in their trust fund balances in less than two months' time. Problem is when cash flow stops, it stops everywhere. There have already been programs set aside to help support state, and municipal governments in the short-term. Without tax revenues, regional governments just don't have the budgets. Some of them were in trouble before the crisis. How far away can true money creation in the form of quantitative easing really be from some kind of all-inclusive monetary action? I don't know. I'm asking you.

This is the heart of "earnings season." Bet you forgot. Just incredible. According to FactSet, which is who I follow on these matters, S&P 500 earnings for calendar year 2020 are now expected to print at -12.3%, on revenue declines of just 1.1%. Something tells me that revenue expectations may have to come in a bit. Just a hunch. Broken down by quarters, the quarter currently being reported is expected to show earnings "growth" of -14.5%, while the quarter (Q2) currently under way is expected to show something more like -26.6%. Because you asked, Energy Sector earnings broken out from the rest of the S&P 500 are now expected to see Q1 earnings growth of -65%, to be followed by Q2 earnings growth of roughly -130%. Hmm.

Reentering Walmart (WMT) on a discount, should the market grant one. Saw the news of the sale of the ad-supported streaming entertainment service Vudu to Comcast (CMCSA) which put the idea back in my head. Not here though. I think I need to see $125 first, last sale $129.85, so maybe this does not happen. Already exposed to Amazon (AMZN) and Costsco (COST) , so I do not want to get too broad in anything right now, unless I see my price. Discipline.

Get an email alert each time I write an article for Real Money. Click the "+Follow" next to my byline to this article.
TAGS: Earnings | Economic Data | ETFs | Investing | Markets | Oil | Stocks | Trading | Energy | Retail | Coronavirus