Ulta's (ULTA) chart has the potential for a beautiful move. A large gap begs to be filled if bulls can push shares just a bit higher by today's close. A hole in late August has worked as strong resistance as investors have waited for this third-quarter report, and the report didn't disappoint.

The company reported earnings per share of $2.25 versus expectations of only $2.13. Revenue of $1.68 billion actually came in slightly below estimates of $1.69 billion, but at these levels that is nothing more than a rounding error. Comp sales increased a solid 3.2%, with the average ticket size increasing just under 1%. Shares are up about 13%, likely goosed more by relief than guidance. Management did raise the full-year outlook midpoint by two cents, which is now $0.06 more than analysts estimates, but after a big $0.13 beat this quarter, Q4 doesn't look much better than in line with prior expectations.

Inventories jumped $132.4 million for the quarter, which is sometimes cause for concern, but I don't see it here. Between 78 new net store openings and the upcoming holiday season, it is justified in my view. Overall, the company opened 80 new stores year-to-date expecting an increase in sales of 10% for the year. E-commerce for the year should be up 20% to 30%, offering a solid push into the digital market. 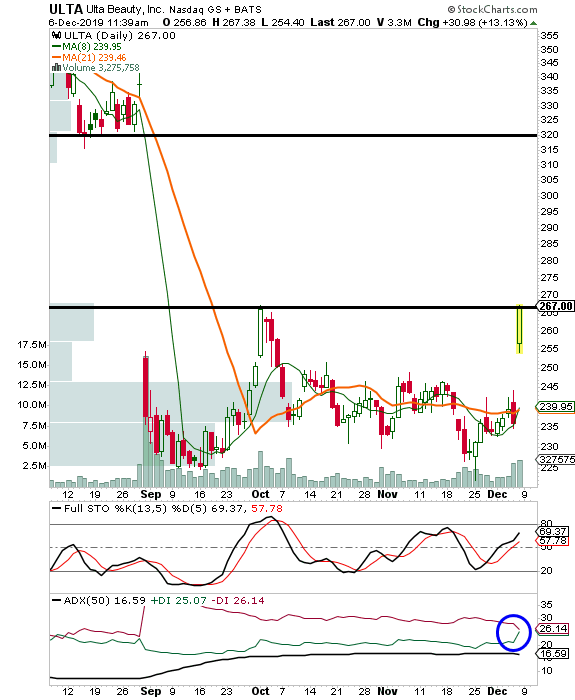 As far as the technical picture, momentum traders have to be drooling at this gap fill. It isn't often you find a gap fill potential of $50. While I don't love chasing stocks, a close over $270 combined with the setup for a bullish crossover in the ADX indicator sets up the potential for an upside explosion over the next three months. Additionally, the Full Stochastics indicator is confirming the move.

With $208.8 million in cash in the bank and a strong share buyback in place, hitting $128.6 million at an average of $242.91 per share, I would view the $250 level as strong support. This Q3 is strong enough with guidance and that should put buyers into the name. That's where I would be.