For his third "Executive Decision" segment of Thursday's Mad Money program, Jim Cramer went on location to one of Ulta Beauty's (ULTA) newest stores to speak with CEO Dave Kimbell.

Kimbell said he's proud of Ulta's latest results. He said Ulta's stores showcase the best Ulta has to offer in skincare, haircare, fragrance and makeup, all of which have seen steady improvements throughout 2021.

When asked about the new partnership with Target (TGT) , Kimbell said he's very excited about the possibilities with Target. Their goal was to build a totally new experience that will focus on guests in new ways.

Turning to the holidays, Kimbell said Ulta will be ready for their 34 million loyalty club members, despite continued supply chain disruptions.

Let's check the charts of ULTA.

In this daily bar chart of ULTA, below, we can see that prices have been correcting the steep run-up into late August. ULTA is still comfortably above the rising 50-day moving average line as well as the rising 200-day line.

The On-Balance-Volume (OBV) line has moved sideways since April and while it is not declining it is not confirming the move up to new highs. This bearish divergence between the price action and the indicator has not resulted in a meaningful correction.

The Moving Average Convergence Divergence (MACD) oscillator is above the zero line but has crossed to the downside for a take profit sell signal.

In this weekly Japanese candlestick chart of ULTA, below, we can see two key shadows. The large upper shadow in late August shows that traders rejected the highs and the recent lower shadow tells us that the lows are being rejected too. Prices are above the rising 40-week moving average line.

The weekly OBV line is positive and thus does not diverge from the price action. The MACD oscillator is bullish in this time frame.

In this daily Point and Figure chart of ULTA, below, we can see a $460 price target. 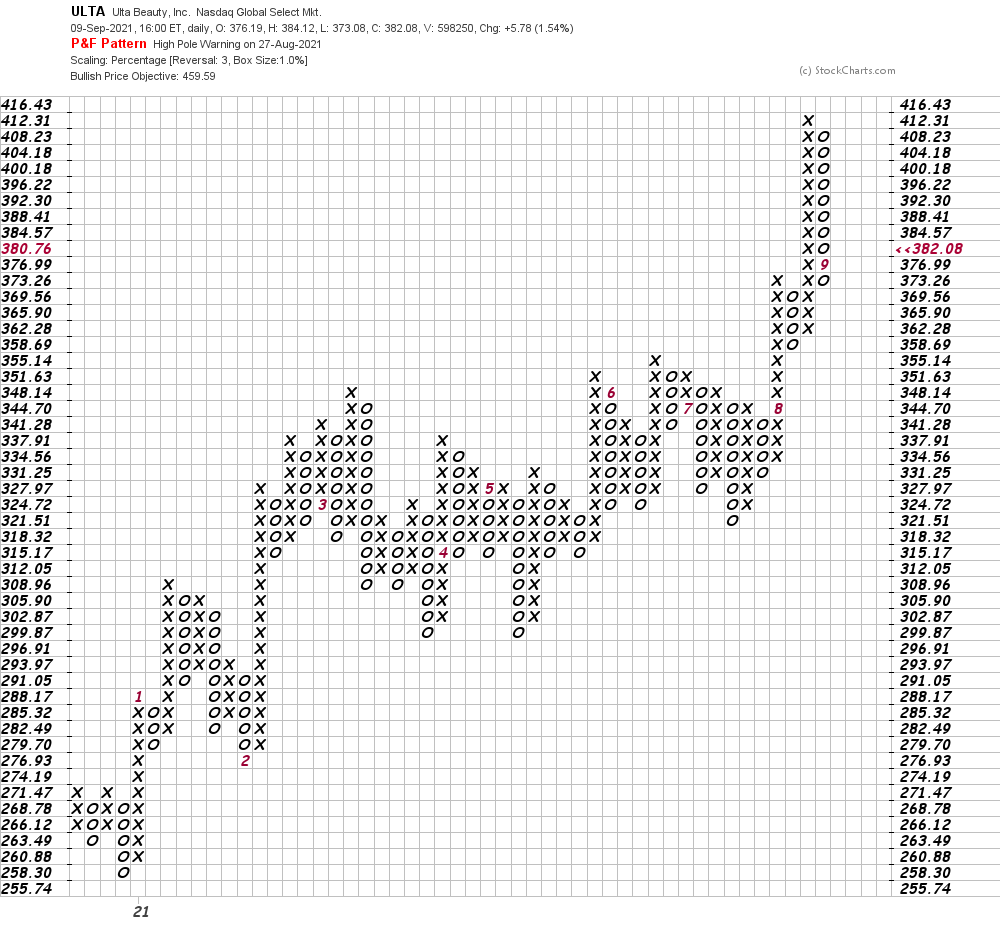 In this weekly Point and Figure chart of ULTA, below, we see a price objective in the $479 area.

Bottom line strategy: In our review of May 19 we recommended "ULTA is close to a breakout from this triangle pattern we have described. Hold longs from previous recommendations and add to longs or initiate longs at current levels. Risk to $299 for now." Continue to hold those longs and look for $460 on the upside. Raise stops to $345.

Get an email alert each time I write an article for Real Money. Click the "+Follow" next to my byline to this article.
TAGS: Investing | Stocks | Technical Analysis | Trading | Personal Products | Retail | Mad Money | Executive Interview | Consumer Discretionary