A mist shrouds the view

All that is seen and unseen

Moon above. Black and blue

Earth below, what can it mean?

Have yet enough innocents died?

On Tuesday, talks between the Ukrainian and Russian delegations in Istanbul appeared to make progress, appearing to what most of us would consider to be... constructive. The Kremlin announced that it would be curtailing military operations around Kyiv and Chernihiv in northern, central Ukraine and would instead focus on areas closer to the Donbas region in Eastern Ukraine, which is largely a Russian speaking area. The region includes both Donetsk and Luhansk, which the Kremlin has recognized as independent states. Ukraine for their part, has proposed a neutral status, militarily, going forward. The world looked on with hope. Markets priced in the potential for a cease-fire that might cover most of the country.

The problem is that the fighting continued. The Kremlin had promised in February that Russia had no intention of attacking Ukraine. Then Russia invaded Ukraine. The Kremlin had announced in February that its troops had been engaged in military exercises in Belarus, and would pull back once those exercises were complete. Then beefed up Russian forces used Belarus as an avenue of attack.

Skepticism was the reaction both globally and from Kyiv, as the Kremlin had obviously surrendered any and all credibility that it might have had, prior to late February. The fighting? Oh, the fighting raged on. Russian missiles continued to strike civilian targets inside Ukrainian cities, and for the first time, there are reports of a Ukrainian missile strike against a Russian military encampment outside of Belgorod... on Russian soil.

Russian Defense Minister Sergei Shoigu stated, "In general, the main objectives of the first stage of the operation have been achieved." Wow. Full stop. Wonder what Shoigu thinks failure looks like. Guess their main objectives must have been running out of fuel, food and losing eight general officers, and taking home tens of thousands of casualties. Congrats. Pentagon spokesperson John Kirby did say that a "small number" of Russian troops had moved north of their former positions, but that the U.S. believes that Russia will continue to threaten the capital with airstrikes.

Demand was strong for the US Ten Year Note on Tuesday, as that yield dropped about 8 basis points to go out at a rough 2.40%. That is where I see it this morning, after dipping as low as 2.34% overnight. The Ten Year remains inverted versus the yields of the US Seven Year, Five Year, and Three Year Notes. That Ten Year yield did (very) briefly invert versus the US Two Year Note on Tuesday as both products momentarily paid about 2.39%. The Two Year Note currently pays 2.32%. Early on Wednesday morning, the spread between the Ten Year and the Two Year stands at +8bps, while the spread between the Ten Year and the Three Year stands at -12 bps.

So, economic contraction between two and three years out? If only it were that easy to project. There is still a lot of wood to cut between now and then. Impossible to accurately predict the global economic outcome of this war in Europe, or of the ever-evolving pandemic. How will the U.S., the UK, the EU, Canada, or China contribute to broader economic activity? How will inflation evolve both domestically and globally, and how hawkish will central banks have to be? It is plain to see that at least here at home, projections for short-term interest rates over the medium-term are likely out of sync with projected labor market conditions over that time frame. All that said, and understanding that we truly can not fully understand... expanded economic hardship if not outright contraction in two to three years is exactly what Treasury markets are signaling. This uncertain outlook too, will evolve.

Pure Aggression. It was the day that high speed, keyword algorithms reacted to the potential for peace. Even if human beings were more skeptical. Small-caps led the way. The Russell 2000 finally jumped on board the rock and roll train, soaring 2.65%, while the S&P 600 tacked on 2.39%. The S&P Mid-Cap 400 gained 2.09% for the session. Large-caps had quite the day too, and on good volume. The S&P 500 popped for 1.23%, while the Nasdaq Composite led all large-cap indexes, at +1.84%. Ten of the 11 S&P sector-select SPDR ETFs gained ground for the regular session. In an odd pairing, the equity marketplace was led northward by the REITs (XLRE) , and Technology (XLK) , up 2.93% and 2.12% respectively. Within tech, the Philadelphia Semiconductor Index ran 2.12% led by On Semiconductor (ON) and Microchip Technology (MCHP) . The Dow Jones US Software Index moved 1.96% higher led by EPAM  (EPAM) and Teladoc (TDOC) . Energy (XLE) at -0.26% finished in last place again, and was the only SPDR ETF to close in the red as WTI Crude traded with a $99 handle at one point during the Tuesday session. Just an FYI, WTI Crude is trading back above $106 this morning as the fighting continues in eastern Europe.

Earlier this week, DARPA (US Defense Advanced Research Projects Agency) got its Novel Orbital Moon Manufacturing Materials and Mass Efficient Design program (NOM4D) underway. The program involves research teams from the University of Florida, University of Illinois, University of Michigan, and California Institute of Technology, as well as a number of private industry research teams as well.

The teams, according to DARPA, will be tasked with providing foundational proofs of concept in materials science, manufacturing, and design technologies to enable the production of future space structures on orbit without the volume constraints imposed by launch. The idea in plain English is to get materials necessary as well as to collect lunar materials crucial or beneficial to orbital construction.

While the brief does not mention any publicly traded companies nor any obvious soon to be realized business opportunities, one would think that when the time comes that the large-cap defense contractors and maybe some already public, but not profitable space tourism/exploration companies, could be involved. That said, I have my eyes on (and some of my capital in) Redwire Corporation (RDW) . Redwire is a D-SPAC, doesn't turn a profit, and barely drives any revenue. There is no Wall Street coverage. 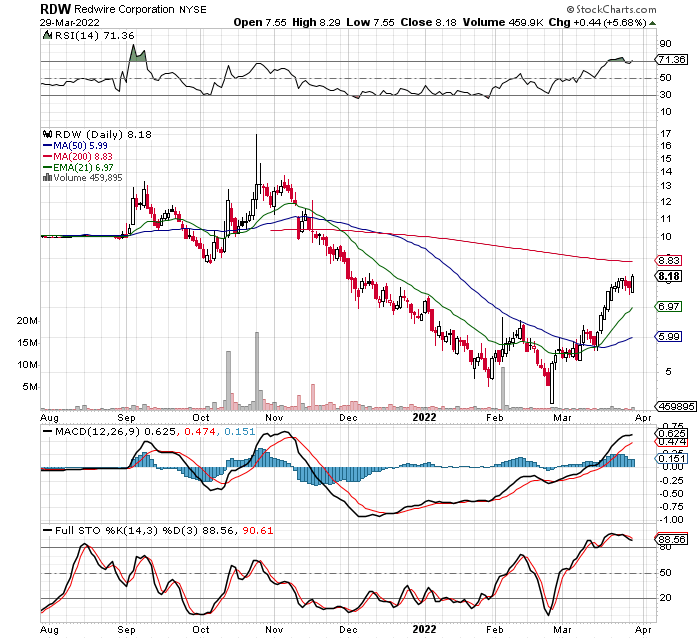 The shares have become short-term overbought, while apparently trying to build the right side of a cup pattern. Should there be some profit taking at this point, I would see that (I am biased) as the possible development of a handle, than I think I would see the end of this run altogether.

Just who is Redwire? This is a Jacksonville, Florida based company that provides a range of space infrastructure solutions, including mission-critical components, deployable structures, human-rated camera systems, and advanced payload adapters. Oh, and an area of focus is "on-orbit servicing, assembly & manufacturing." When I saw the DARPA release, I immediately thought of Redwire. I have been long the name for a few months. My average point of entry is $6.33. Up 29% as of yesterday, I was actually thinking of taking some profits for myself. I think maybe I will wait on that thought. This might just turn out to be more of an investment than a trade. Might take a while. Will probably be a volatile ride.

Get an email alert each time I write an article for Real Money. Click the "+Follow" next to my byline to this article.
TAGS: Economy | Indexes | Investing | Markets | Oil | Rates and Bonds | Stocks | Technical Analysis | Trading | Treasury Bonds