Over the weekend, the Ukrainian armed forces reported having suffered fewer aerial assaults upon the southeastern port city of Mariupol. The situation in the city has become desperate. Russian artillery along with those airstrikes that began in the early days of the war have leveled entire areas of Mariupol. Temperatures have been below freezing. There is no running water, no electricity, no gasoline. Residents who have not found a way out of the city, must be having a difficult time finding food by now.

With that perceived drop-off in airstrikes upon the city came an offer. The Russian military delivered an ultimatum according to the National Defense Control Center of the Russian Federation, which was reported by Tass. Ukrainian fighters were to lay down their arms and surrender the city by 5 am Monday. Local officials refusing to surrender would face military tribunals. Needless to say, the Ukrainian response was not complex. The Ukrainian government rejected Moscow's ultimatum. Unconfirmed word is that Russia has again stepped up its assault across Ukraine.

On that note... more than 10M Ukrainian civilians have now been displaced from their homes as civilian casualties continue to mount. The European Union, NATO, and the G7 all plan for heads of state to meet this week in Europe. After that, U.S. President Biden is set to visit Poland this Friday.

The World Wakes Up

How many years now, have I been writing with some alarm that both China and Russia were ahead of the U.S. in hypersonic weapons developments? As far as you can remember? More like two to three years. Well, the dragging of the feet on this issue, and the lack of decisive defense budget capital allocation specifically earmarked toward these programs now has an obvious cost.

For those who have been sleeping under a rock, thinking that the U.S. had a "forever" advantage in all things defense related, hypersonic weapons fly at speeds too great for any currently used "modern" air defense systems to intercept. In other words, these weapons are at this time, indefensible. These missiles are incredibly maneuverable, and have been successfully tested for about a year now by both the Chinese and Russian militaries. Even North Korea claims to have tested a hypersonic missile.

Oh, in case I failed to mention it, hypersonic missiles could, in theory, be fitted with nuclear warheads. There should be no national priority greater than developing both defensive and offensive hypersonic technology equal to, or greater than that of our "near-peer" or "peer" adversaries.

Last week, for the first time, the Russian Air Force used a hypersonic missile in combat. Over the weekend, Russia used a second such missile. Was it so important to hit Ukrainian targets with such high-tech weaponry when Russia has appeared to be more than content to use old-fashioned "dumb" munitions in striking Ukrainian targets of opportunity. There has been no obvious attempt by Russian forces to spare civilians some of the carnage. Quite the contrary. Evidence points toward a Russian military that has intentionally bombed residential areas indiscriminately.

Why would Russian President Vladimir Putin showcase his shiny new weapons? I just told you. This week brings more diplomacy than it does corporate earnings. Heads of state of the EU, NATO and the G7 all meet this week prior to President Biden's visit to Poland. Take the Russian military's use of a newer technology weapon that NATO has not yet successfully tested as a warning... for that (opinion) is exactly how its use in this conflict was intended.

Leadership on the U.S./NATO side in developing these weapons is forming into two methods of delivery... one by Lockheed Martin (LMT) that has failed in early tests, and a second by a collaborative effort between Northrop Grumman (NOC) and Raytheon (RTX) . Get this done. Nothing is more important.

This has put a soft touch on early Monday morning equity index futures after what was a fantastic week for net-long portfolios. The S&P 500 took back 6.16% last week, closing on Friday still down 6.36% year to date. 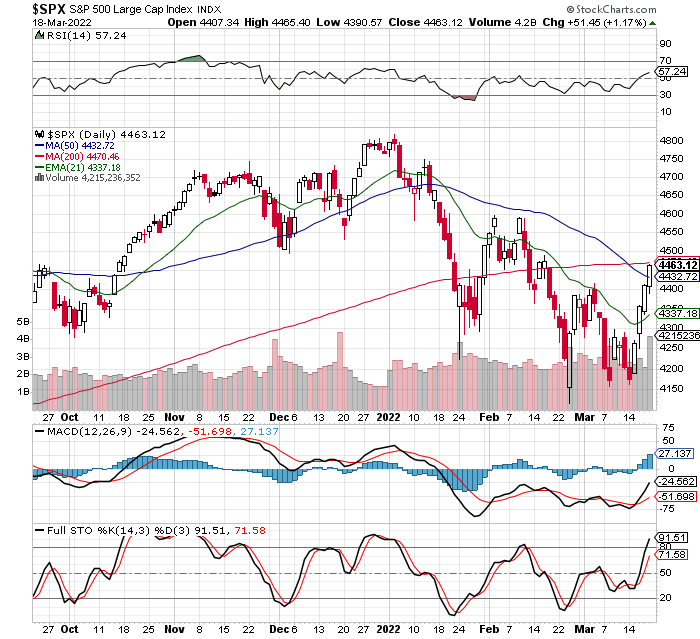 Readers will see that during the past week, the S&P 500 took back its 21 day EMA, its 50 day SMA and closed just short of trying its 200 day SMA on for size. The index rebounded from a nearly technically oversold condition to, at least according to the Full Stochastics Oscillator, something close to being short-term overbought. 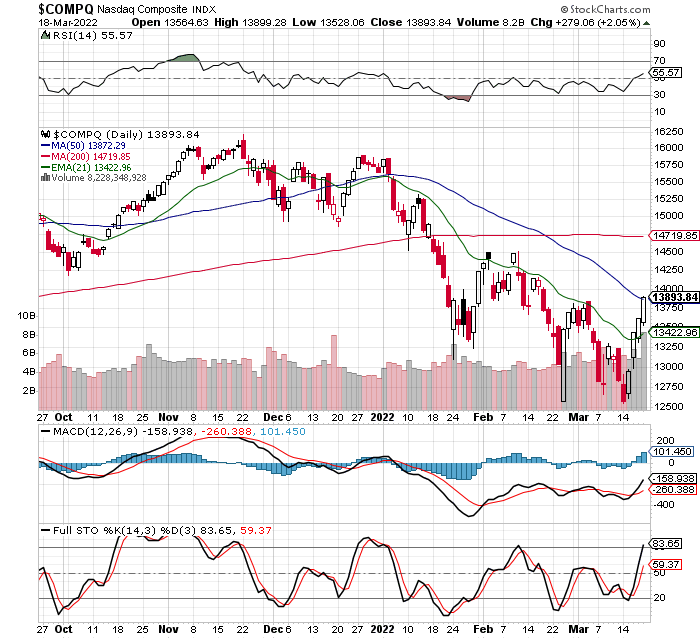 That said, this index is a little behind the S&P 500 developmentally. The Index closed on Friday just above its 50 day SMA, still a long way from that 200 day SMA. However the Relative Strength Index and Full Stochastics Oscillator for both of these key large-cap equity indexes appear to be doing the same thing.

Breadth on Friday was similar to breath for each of the prior three days... exceedingly positive. Of course, while trading volumes were high last week, Friday's volume is not comparable to anything experienced over the first three days of the rally that by definition has turned into a confirmed change of trend, due to the quarterly "triple witching" expiration event.

Ten of the 11 S&P sector-select SPDR ETFs closed in the green last week, with this year's star... Energy (XLE) closing deep in the red at -3.86%. (The XLE may have been the only "down" sector ETF last week, but remains the only "up" sector in 2022 to date.) The upside push for the week was led by Consumer Discretionaries (XLY) , Technology (XLK) , and the Financials (XLF) that popped for 9.09%, 7.64%, and 7.14%, respectively. Autos led the Discretionaries, while the Semiconductors led Tech.

Thought we were done with the FOMC, at least until May 4th? Think again. Currently, I am tracking at least 13 public appearances by Fed speakers over the next five days including Fed Chair Jerome Powell twice (including this afternoon). When the hive buzzes with activity like this, it has sometimes meant in the past that the Fed was dissatisfied with the way the public, or the financial markets have perceived their messaging. This could mean that "they" wish to drive home a point that we might not be "getting" just yet.

Earnings are remarkably light this week, as is for the most part... the macroeconomic calendar. That is until we hit Thursday when the Census Bureau will lay February data for Durable Goods Orders upon us. Expectations are for a month over month contraction at the headline level.

Beyond that, this will be a busy conference week. Goldman Sachs (GS) will hold its Chemical Intensity Days Conference, which will compete against the Keybanc (KEY) Virtual Healthcare Conference, the DA Davidson EV and Energy Transition Virtual Conference, the Piper Sandler 22nd Annual Energy Conference and the Wolfe Research Software Conference for attention.

Just a side note... this Wednesday, Intel (INTC) CEO Pat Gelsinger and Micron (MU) CEO Sanjay Mehrotra will testify before the Senate Commerce Committee in an effort to win subsidy dollars for the purpose of developing and promoting the domestic manufacture of semiconductor chips and processors.

I heard an unnamed pundit say that Wall Street loves volatility. Are you sure? Maybe traders love volatility. The whole of Wall Street probably not so much as we all know that investment banking is what gets the big kids paid.

According to Dealogic (which I read about at the Financial Times on Sunday), Morgan Stanley (MS) , JP Morgan (JPM) , Bank of America (BAC) , Goldman Sachs, and Citigroup (C) have generated $645M (in aggregate) from equity capital market fees so far in 2022. This compares (very) poorly with the $5.3B generated by the same point in 2021. There was not a single traditional IPO in the United States between February 17th and March 14th, which, according to Dealogic, is the longest such drought not involving holiday season in five years.

May The Force Be With You 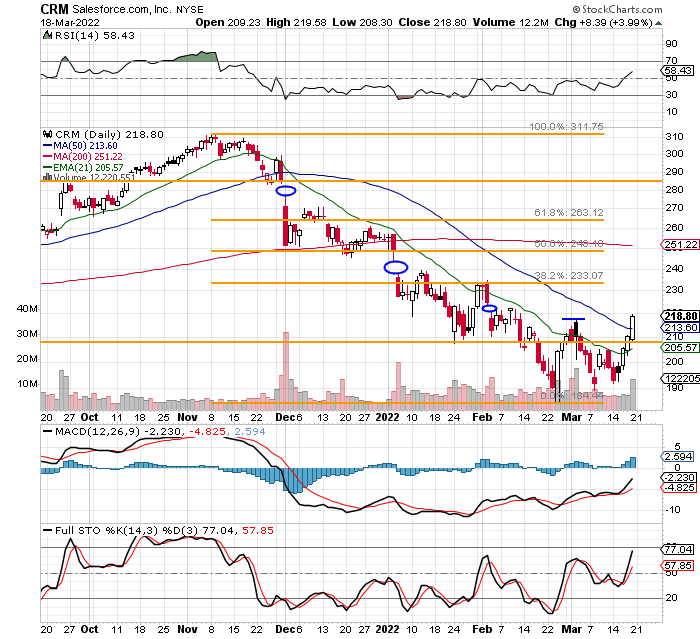 I showed this chart to the crowd over at the Doug Kass Diary (to my right, your left at the Real Money Pro homepage) on Friday. The point I tried to make was that Salesforce  (CRM) had taken back its 50 day SMA and was approaching a $217 pivot created by a double bottom reversal. Long story short, the stock took that pivot prior to the closing bell on Friday and held the level. Key here, as the shares do not yet look technically overbought, are the unfilled gaps created on the way down that still stand... (November into December, early January. early February).

With some pressure on the broader equity marketplace Monday morning, I would think that there could be a battle at pivot that never really developed last Friday. Should pivot hold... My target price for CRM becomes $260, with a panic point of $212, which would constitute a break of the just taken 50 day SMA.

(NVDA, DIS, MSFT, and MS are holdings in the Action Alerts PLUS member club. Want to be alerted before AAP buys or sells these stocks? Learn more now.)

Get an email alert each time I write an article for Real Money. Click the "+Follow" next to my byline to this article.
TAGS: Federal Reserve | Investing | Markets | Stocks | Technical Analysis | Trading | Defense | Restaurants | China | Europe | Russia