Everything that Lyft (LYFT) "gave" the market to like about ride-sharing, Uber (UBER) tried to take away. Actually, they did take it away. Yesterday's gains have basically been reversed.

It's difficult to pinpoint one item in the Uber report that made it such a car wreck, but it almost feels human nature to stare at a wreck. It's as if we have an inability to look away. The company's CEO referred to the quarterly report as a "once-in-a-lifetime" report, and he didn't mean it in a positive manner. Heck, for some companies, the $5.2 billion quarterly loss will exceed a lifetime of losses. It might even exceed a lifetime of revenues. This was a once-in-a-lifetime quarterly loss mainly due to IPO "costs." These costs came in the form of stock compensation and Driver Appreciation Awards. Uber is a staunch reminder that long gone are the days where companies were coming public with their best days ahead of them. This IPO was an Uber dump.

The good news is the actual loss and cash burn weren't nearly as bad as the headline number. The company lost around $1.3 billion net of stock compensation and burned $920 million in cash. Fortunately, it raised $8 billion in the IPO and received another $500 million from PayPal (PYPL) . Revenues of $3.17 billion were strong although short of Wall Street's $3.36 billion projections. The Drive Appreciation Award of $299 weighed heavily on the bottom line resulting in the big miss of $1.53 on the $4.72 per share loss.

The company did reach over 100 million monthly active platform customers and signaled the price war in the U.S. is easy. We saw this in Lyft's report as well with solid growth in active users and stronger pricing power. There's no doubt domestic ride-share is strong, but unlike Lyft, Uber is about more than rideshare. It is competing domestically for Eats business and internationally for ride-share. Competition is high resulting in huge spends for Uber to try and lock territory. It's unlikely shareholders will see a bottom line profit until the next Winter Olympics (that's 2022, so you don't have to look it up).

Analysts are split on the results in terms of adjusting price targets, but I haven't seen any upgrades or downgrades. In my view, Uber committed the ultimate sin essentially using the first quarterly report as a kitchen sink quarter. They tossed everything including the kitchen sink. "Once-in-a-lifetime"? Bulls better pray it so. Fortunately, bulls have the benefit of big money behind Uber. These strong hands aren't likely to fold soon. Plus Uber does have a huge cash war chest. If it can continue to aggressively expand and find a way to reduce cash burn from the dizzying nearly $1 billion this quarter, then it will have the cash and time to get to where it needs without additional capital. 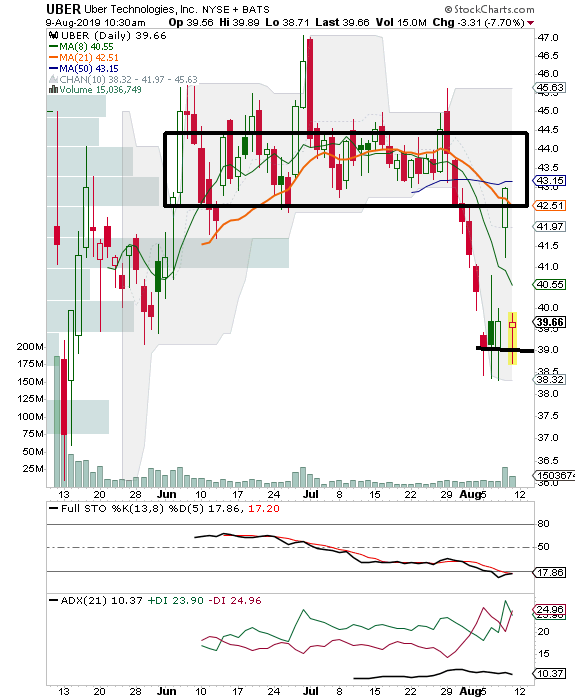 There's not much we can divine from the chart given the short three month trading history. The $37 to $39 area should act as support. If $37 fails, then the stock could be in big trouble as it attempts to find a new bottom. Rallies into the $42.50 to $44.50 are likely to get sold aggressively. There's too many investors under water who will likely be happy to get out of at least a portion of their holdings breakeven. Add in the island top created yesterday and the lock up release on November 6th and there is some tough sledding in play. I do think a close above $40 will encourage dip buyers to take us back to $42. I'm not impressed by the results, but I can't ignore the stock action. In theory, we should be down a lot more. We're not, so as traders we need to respect that. If we close below $40, but above $39, I think we'll have a few days of muted action; however, if we close above $40, then I think next week will bring buyers into play.

Get an email alert each time I write an article for Real Money. Click the "+Follow" next to my byline to this article.
TAGS: Earnings | Investing | Stocks | Technical Analysis | Trading | Transportation | Stock of the Day