The shares of Uber Technologies (UBER) are trading higher this morning in response to an upgrade by Citigroup analyst Mark May, who is rated at five stars out of five at TipRanks. The firm moved UBER from a "Neutral" rating up to a "Buy", while interestingly leaving the firm's $45 price target precisely where it is, roughly 50% above the last sale. Citi sees an improved risk/reward scenario at these levels. Okay, who can argue with that? The shares have been decimated since mid-August. May believes that the sum of the parts valuation has become difficult to ignore.

Research analyst Itay Michaeli spoke up ahead of the firm's Q3 earnings report scheduled for release in early November. Michaeli said the third quarter "could provide a window to refocus the story on improving fundamentals" He adds: "With revenue growth also expecting to accelerate in H2, the Q3 earnings report could be enough to swing forward sentiment more favorably to some extent even as overhangs like AB5 and the lock-up persist." AB5 is the California state legislation that concerns the possible re-classification of independent contractors as employees. In theory at least, that rule would entitle workers to greater protection such as minimum wage, sick leave, and unemployment compensation benefits.

The second quarter was tough on UBER. The firm posted a much larger GAAP EPS loss than had been expected on considerable less revenue than Wall Street had been looking for. Yes, that revenue did print at year over year growth of 14.4%, but the pace of that growth had seriously deteriorated for a sixth consecutive quarter. The bright spot was that the adjusted EBITDA loss of $656 million was far better than the loss on nearly $1 billion that had been projected. The actual loss had been much larger, and to a great degree tied to stock-based compensation expenses.

For the third quarter, consensus view is for EPS of $-0.83 on revenue of $3.7 billion. Such revenue generation would put growth at the top line back on track at a 25.7% annual growth. The fact is that the firm runs at a significantly negative operating cash flow, and is currently priced at a significantly negative forward looking PE ratio. The firm has enough cash on hand to become profitable in time. The firm's current ration stands above 2.5, meaning that they are in no danger whatsoever of not meeting short to medium term obligations. Does that mean that I want to buy some here? The street expects full year EPS to land in the area of $-6.96, and then smooth out a bit in 2020. Still, even 2020 for the full year is currently projected at $-3.08. In addition, the lock-up period for UBER expires on November 6th, one day ahead of what I see as a tentative Q3 earnings release date.

This is a tough environment for growth stocks, no doubt. Does the investor not already engaged really need this name on their book? Ahead of the lock-up date? A positive earnings release might help demand meet what might be an expected new spate of available supply in the marketplace at that time? If that's not speculative, then I misunderstand the definition of the word. 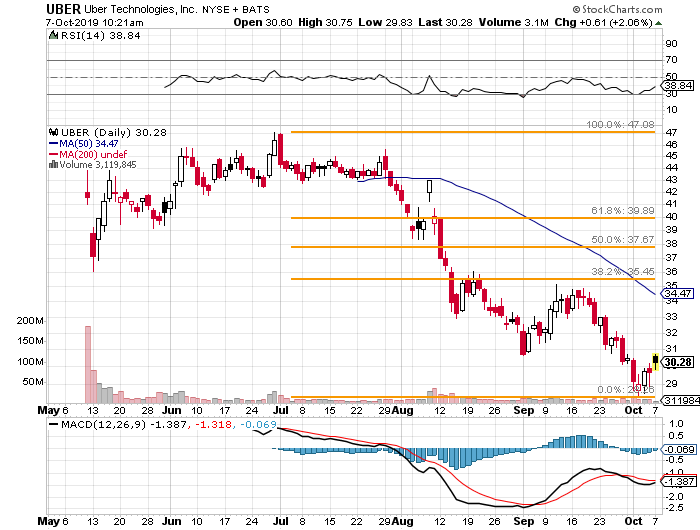 The stock has, at least for now, found a short-term bottom. There is traffic to the upside should this rally gain legs. The 50 day SMA comes into play at $34.47, and then there will a Fibonacci level to contend with just a dollar higher than that.

I have traded the name, and I see no problem if a trader wanted to play the name fully aware of the dates involved and the "not so hot" expectations across the analyst community in terms of performance. That said, as an investor, I have absolutely no interest in this stock until we have a handle on supply and demand after the lock-up expires.

I am not saying this name does not have a chance. I am just saying that I have less room on my book for money losing operations facing obvious hurdles to their immediate front, that pay the investor no dividend for their trouble in the current environment.

My opinion would be that the best way to be involved would be a play on volatility. A November 8th $29/$32 strangle (long one $29 put/long one $32) call would run a trader a rough $2.85 this morning. That means that for such an approach to be profitable the shares would have to close that Friday either above $34.85, or below $26.15. At least potential loss there would be capped at the aggregate debit.

Me? I am not in this foxhole with you. You're on your own.

Get an email alert each time I write an article for Real Money. Click the "+Follow" next to my byline to this article.
TAGS: Investing | Options | Stocks | Technical Analysis | Trading | Transportation | Stock of the Day | Earnings Preview