Hard to see? Maybe. Maybe not. Losses mount. Uber Technologies (UBER) CEO Dara Khosrowshahi, who is clearly an optimistic sort if there ever was one, charts a new path, adjusts what the firm is doing, and pushes back the goal posts just a bit. What can not be denied is that Khosrowshahi is still set on future profitability, and even if delayed, not that really that delayed.

Uber reported the firm's first quarter financial results on Thursday afternoon. The firm posted GAAP EPS of -$1.70, which missed by a mile. Revenue generation printed at $3.54 billion. This was a beat, and also good enough for annual growth of 14.2%. Gross Bookings were higher, while rides struggled, understandably.

What's interesting is this: The firm posted a quarterly loss of almost $3 billion. This includes a $2.1 billion pre-tax write-down based on the value of some of the firm's investments that have been harmed by the impact of the coronavirus themselves. On an adjusted basis, the firm lost $612 million, or -64 cents per share, which actually beat expectations. As far as active platform users, that number increased throughout the quarter to 103 million, growth of 11%. For the quarter, rides based revenue actually increased 2% year over year, despite an 80% drop-off in April with much of North America under lockdown.

What actually did help the business offset this decline in ridership was Uber Eats, a business often maligned by those in financial media as not quite worth the effort or expense. Only this time that business grew 54% for the quarter, as those very same people who could not leave their homes still ordered food. Not enough to save the quarter, but enough to repurpose at least some drivers, and maintain a certain level of engagement with customers.

While Uber Eats was nice to have around for the firm this quarter, rides are what pays the bills, and the bills are primarily paid in North America. The firm will need a successful and sustainable reopening of the economy to be successful itself. There are encouraging signs of late. Both Uber and chief competitor Lyft (LYFT) have stated that there has been something of a pick-up in ridership in recent weeks. On that note, I thought to myself... yeah, right, who the heck is going to get into a stranger's car at times like these. Then I thought a little more... let's say someone needs a ride... would you rather get in a vehicle with a driver who is at least facing forward, or take your chances with mass transit? Put that way, the proposition seems to make ride-sharing quite possibly the choice of less public exposure.

Unfortunately, the firm will have to focus on cost control until the public situation becomes whatever it becomes, which will hopefully be closer to normal than this. Earlier this week, the firm announced a 14% reduction in staffing, which amounts to 3,700 of the almost 27,000 employees. Total reductions to be made to the firm's fixed costs are expected to reach $1 billion. This has the firm eyeballing 2021 as the year that at least on an adjusted EBITDA basis, corporate profitability could be attained, one year behind the plan announced prior to this public health crisis. 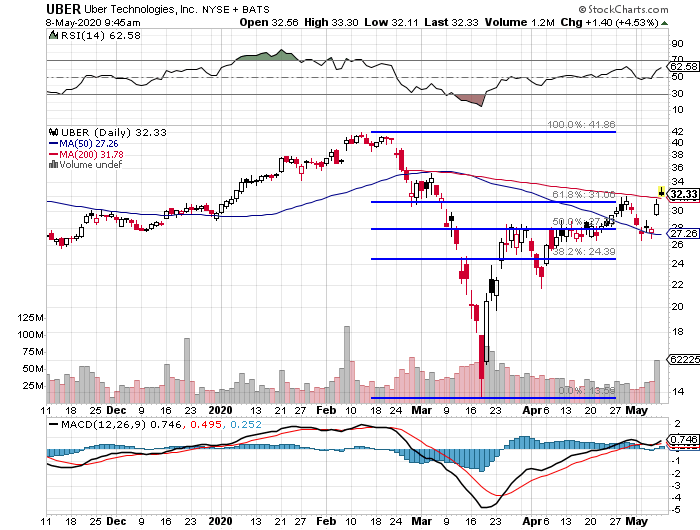 These shares hit resistance in late April, either at the 200 day SMA or at out old friend Fibonacci's 61.8% retracement level. You choose. What is key now is that these shares appear to have taken that level, and holding that "this red line" into this evening's close and into next week is paramount.

I see no fault in taking a speculative position in Uber Technologies. The firm is not in any way a disaster, though there is a lot of work to be done, and they remain a long way from where they have to go. I don't know about profitability next year, or about Uber Eats as a driver of sales or margin in a normal society.

You want me to tell you what I am going to do. I understand. I am not buying UBER today. It is on my radar. I would rather pay a dollar higher on momentum than this close to a key technical line like this. Maybe Monday. Maybe Tuesday. It's all about probabilities and the flow of capital.

Get an email alert each time I write an article for Real Money. Click the "+Follow" next to my byline to this article.
TAGS: Earnings | Economy | Investing | Stocks | Technical Analysis | Trading | Transportation | Coronavirus