One of those days. Don't get me wrong. There was plenty of action. I mean if one likes to watch churn. Trading volume was indeed quite elevated at both of New York's key exchanges. Trading volume directly attributable to both the S&P 500 (which closed down small) constituent companies, as well as Nasdaq Composite (closed up small) constituents finished well above their respective 50 day simple moving averages for such volume. In fact, volume measured in this way has exceeded that 50 day line for both of our broadest indices for four consecutive days now, after having barely touched that line for the two months prior. Just in case you thought sideways meant boring.

While certain indices were able to set new all-time intraday highs early on in the session, that move proved largely meaningless. At both the NYSE, as well as at the Nasdaq Market Site, advancing volume just barely edged declining volume. The action, so to speak, was taking place at the sector and industry levels thanks to the wonders of passive investment, and those flows were controlled away from the broader equity marketplace. Equities were but the dog, and on Tuesday, the dog was wagged by the tail.

I Know There's Something Going On

I can see that it won't be long

You grow cold when you keep hanging on

And your words they lie

That's something you can't deny

You'll recall all of the attention we have placed in this column on the Fed's purposeful placement of pressure on the short end of the U.S Treasury yield curve, while allowing the long end to dangle in the winds of something that at some point could actually resemble free market pricing. Today (Wednesday) is just November 6th. Remember Friday? November 1st? Not that long ago. The U.S. 10 Year Note gave up just 1.675% mid-session that day. On Tuesday (yesterday), I saw yields as high as 1.867%. That's over two trading sessions, kids. Real Money colleague Peter Tchir has been telling us that the long end would move like this for some time. For those unaware, Peter is a friend, and certainly a finalist if I ever hand out an award for "smartest human I know."

The all-important 3 month/10 year yield spread went out at 30 basis points last night. 30 bps !! This spread was still inverted as we approached mid-October. In fact the spread's 50 day SMA still stands at -2 basis points. Think about how aggressive that momentum is. (Not kidding. Think about it. Now.) By the way, U.S. Treasury will auction off $27 billion worth of new 10 year paper on Wednesday afternoon.

What was clear on a day that for equities looked quite bland from 10,000 feet was the selloff across the bond proxies, or the safe haven type names. Down went Utilities, down went the REITs. Multiples for those groups had been far too lofty. Understand this development as pro-growth. What else matters here? As the long end of the curve finds it's way, it stands to reason that housing markets could suffer. Could that factor possibly balance out across the broader economy should this steepening of the yield curve result in improved conditions for business credit from the lender's perspective. Does that result in increased availability of such credit that in turn changes for the better trends in capital expenditure? Does economic strength finally broaden out here from the consumer, instead of recent business weakness spreading to that consumer?

Be not afraid. I mean it. Down? Sometimes. Out? Just getting started. We fear for the welfare of our families, and no other earthly thing. We fear no man nor beast. We have each other, and we remain forever undefeated. Let that sink in. How old are you? 30, 40, 50, 60, 70, or older? Still undefeated. Still champion. You've got this, sport.

We already know from a lost economic decade in the recent U.S. past, as well as from global, developed (and dumpster fire) type economies that the artificial suppression of long term rates also suppresses economic growth. If I'm wrong, the Fed is already growing the balance sheet (money supply), they would just have to screw around with the targeting of average maturity. (Note to FOMC: I'm right more often than you are, pay attention.) By the way, the Financial sector led equities on Tuesday, as Asset Mangers and the banks led the Financials. This new-ish condition is also why cyclical types have returned to life.

We've all seen what appears to be a never ending decline in the weekly rig count. There's no doubt that production of U.S. shale is indeed slowing and that this trend could continue. OPEC forecasts declining demand for OPEC oil, not a decline in global demand. That distinction is key. Global oil consumption is still expected to increase to something like 110 million barrels per day by the year 2040. Yes, OPEC must contend with non-OPEC producers that cooperate with the cartel, and those (including the U.S.) who do not.

OPEC meets formally in Vienna in early December. The cartel had already agreed to production cuts of 1.2 million bpd for 2019. Sanctions on Iranian and Venezuelan oil have made reducing output less painful than it might have otherwise been on the group's 13 other members.

What I am getting at, is this: There is obvious pressure being placed upon western politicians as far as climate activism is concerned. That factor combined with slower growth in U.S. Shale production as many firms involved in U.S. exploration now take a more disciplined approach toward investment, as well as an OPEC (Saudi) led increase in production reduction as the Aramco deal nears. That prospectus is slated for release this Saturday, November 9th.

I am thinking, and this is just my thoughts... that WTI Crude (and Brent for that matter) are likely set up for a short-term increase in market valuations as long as the U.S. dollar plays ball. I really have no solid opinion beyond the new year, but there are a number of supportive factors to this market's immediate front.

They rode in on Tuesday after Adobe (ADBE) had held the firm's event for industry analysts on Monday. Safe to say that the firm had impressed it's intended audience. The firm unveiled the latest version of it's Creative Could software, a new Photoshop app for Apple (AAPL)  devices as well as a new Fresco app for Microsoft's (MSFT) surface. Best of all Adobe not only affirmed fourth quarter guidance, but boosted 2020 full year guidance for both earnings and revenue above Wall Street consensus.

Now, most readers know that Adobe was my first love as software turned into "cloudware", so a day like Tuesday after a tough summer was indeed nice to see. Seven "five-star" analysts published some kind of opinion on the name in the wake of Monday's event. Of those seven, six either reiterated the equivalent of a "buy" rating, or increased target prices or both. One reiterated a "hold" as well as a $310 target. That was BMO's Ambrish Srivastava. None of the seven were negative. 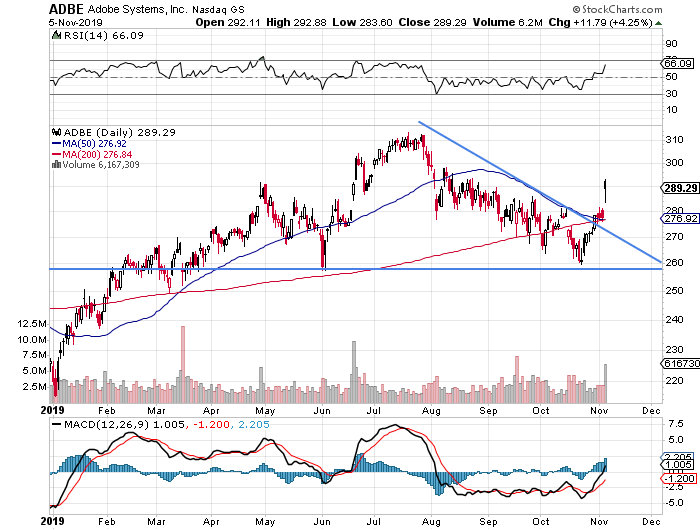 What I see as technically important here is that Adobe appears to have broken out of a forming "descending triangle" (those are bearish). Now, suddenly profiles for Relative Strength and three daily MACD read as positive. Perhaps the most positive item on this chart, is that Tuesday's prices are pulling the 50 day SMA ($276.92) away from the 200 day SMA ($276.84) just as the tow were converging (that's bullish).

- Pivot: $313 (Note... this changes should the current pattern add a handle to this possibly forming cup)

Kratos Defense (KTOS) beat on earnings, missed on revenue that grew 15.5%, and reaffirmed full year EBITDA above Wall Street consensus. The shares are trading higher overnight. I am currently at a 25% stake in terms of position size. Above $19, I am thinking of knocking that down to 12.5%. A few of you were asking.

(Apple, Microsoft and CVS are holdings in Jim Cramer's Action Alerts PLUS member club. Want to be alerted before Jim Cramer buys or sells these stocks? Learn more now.)

Get an email alert each time I write an article for Real Money. Click the "+Follow" next to my byline to this article.
TAGS: Earnings | Investing | Markets | Options | Stocks | Technical Analysis | Trading | Treasury Bonds | Semiconductors & Semiconductor Equipment | Technology