'Never Afraid To Walk From A Deal'

Surprised? We should not be. The above quote can be attributed to President Trump in the wake of a cancelled event where if all went well, the U.S. president and North Korea's Kim Jong Un would have signed an agreement had there been a deal made between the two leaders. This second meeting between the two over an eight month period was cut short by about two hours as Pyongyang looked for relief from already in place U.S. sanctions and in return offered less than was necessary to do so in terms of broad nuclear disarmament. Be careful of the media response this morning as nobody I know actually expected an agreement to be made this week, and considered this summit to be nothing more than a positive step on a longer path. The immediate response across Asian equity markets and domestic equity index futures was to the downside, but hardly in any kind of significant way.

On a Wednesday, where coverage of three newsworthy, and high profile congressional hearings, bounced around television sets across the country like a backyard game of badminton. The mainstream media focused upon the testimony of Michael Cohen before the House Oversight Committee. That's where the eyeballs went. That testimony became "the alligator wrestler", in other words, the main attraction to perform in the center ring of our three ring circus, while lesser in terms of front page suitability, but far more interesting acts (for market folks) performed before smaller crowds in the side rings. One, a matter of entertainment, the other truly significant to market participants.

In front of the House Finance Committee, Fed Chair Jerome Powell in response to a question did not deny the central bank's insolvency on a mark to market basis. The Fed Chair instead avowed that the Fed was not "functionally insolvent", and that even though higher interest rates do exacerbate unrealized losses on the central bank's balance sheet (holdings that have likely been purchased at lower yields with magically created currency) that these unrealized losses are immaterial to the Fed's ability to implement monetary policy (even to raise rates if necessary). Truth, if assets on the balance sheet are indeed held to maturity, and allowed to roll-off, not sold, which had always been the plan. There are times when we disagree with Jerome Powell on policy. I have written on the Fed's mark to market insolvency in the past, you probably remember the piece if you have been with me for a while. I thought this exchange both entertaining, and better than that... honest. I can live with honest.

The second revelation that I took away from the day is probably the reason that markets are hanging in there fairly well overnight. The least covered and perhaps most important of the three events was the appearance of U.S. Trade Representative Robert Lighthizer before the House Ways and Means Committee. Lighthizer made it plain to market participants, as well as participants in the general economy (everyone), that the U.S. planned to take the threat of increasing the 10% tariffs on $200 billion worth of Chinese imports to 25% that had been stamped with a March 2nd deadline off of the table indefinitely. Even better than that, Lighthizer also indicated that a mechanism for enforcement of any trade deal had been agreed to, even if a trade deal has not. How interesting. Thought to be a major obstacle in the road toward signing anything, enforcement appears to now be out of the way. Lighthizer let on that significant progress had been made. The market has priced much of this optimism in, I believe. Overtly willing to make large purchases in areas of need such as energy and agriculture in order to reduce the trade gap between the to nations, the bridge toward moving forward still resides in the area of structural change. That's where a deal actually costs the Chinese side something of value. We're talking forced transfers of technology, government subsidization of Chinese companies in competition with foreign firms, as well as a level of regulatory prejudice where U.S. firms are concerned.

Time will tell. For those who expect this trade deal to get done easily, or expect the president to accept a deal inferior to what might be considered optimal just to get something done... do you really need to be reminded that this president is not afraid of bad press? Do you need to be referred to the quote at the top of this page?

If the markets do not come in from here, it would be foolish to not expect the trajectory of upside price acceleration to do anything other than broaden the slope by which gains are made.

All Hands On Deck

While the thaw in U.S. relations with North Korea put a cooling effect on the defense sector in 2018 that I admittedly had given you as a favored sector late in 2016 through 2017, those stocks also suffered through the various global tensions over trade. Not making excuses. Took that one in the nose with you until the group rallied hard since the late December lows, performing in line with the Industrial sector as a whole.

Enter this border conflict between India and Pakistan. The planet thinks that it is used to seeing this conflict reignite every few years. What the planet might not quite understand is that these two nuclear powers are both more powerful, as well as more capable each and every time this seems to occur. Now each side claims to have shot down fighter jets. A pilot has been captured. This is where both the U.S. and China... and perhaps Russia need to focus... in order to ensure that nothing terrible happens. This is also why I never go completely flat the defense and aerospace industry. You did see Boeing (BA) on Wednesday? Wow. Boeing trades on a different metric. I always maintain long positions of some level that I adjust in both Lockheed Martin (LMT) and Raytheon (RTN) . Missiles, drones, and fighter planes... well, they never really go out of style. Don't even get me started on the need to rapidly improve the domestic ability to defend against what can not be currently defensed against... hypersonic weaponry. That leads me to the best defense name that I have given you.. Kratos Defense & Security (KTOS) . 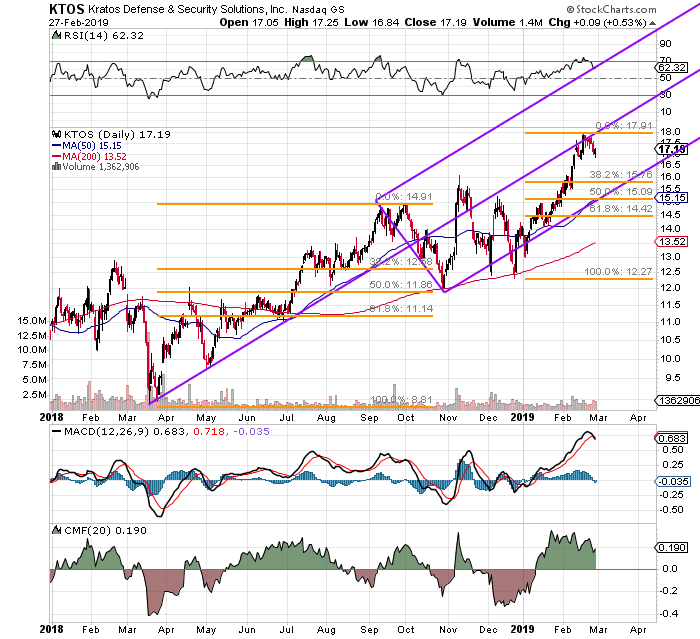 Kratos reports the firm's Q4 financial results after the closing bell tonight (Thursday). Expectations are for EPS of $0.06 on revenue of $188.24 million. That revenue number besides the appearance of having consistently landed a series of deals will, if realized, represent a handsome sequential increase, yet a year over year decrease of nearly 7%. While Money Flow looks strong, that's backward looking, and this name has outperformed the group on this recent run. Relative Strength is off of the highs, while the daily MACD has sent it's first truly bearish signal since December.

I am up substantially in this name over time, as I suspect you might be if you follow me. With the name still close enough to the highs, and trading higher in pre-opening trade, I am likely to reduce the risk ahead of earnings. That does not mean that I don't like the name. It just means that I have something to protect. I am as likely to add on a negative reaction to earnings as I am to a breakout. Let me show you what I mean in my trade example.

- Sell 100 shares of KTOS equity at or close to last sale of $17.18, leaving majority of long position in place.

Notes: This trade reduces equity risk ahead of the news event, while creating the opportunity for the investor to repurchase those shares at a similar price on a post-earnings breakout. The trader more than pays for that expense through exposing him or herself to greatly increased equity risk at greatly reduced prices over time.

Get an email alert each time I write an article for Real Money. Click the "+Follow" next to my byline to this article.
TAGS: Earnings | Economy | Investing | Markets | Stocks | Technical Analysis | Trading | Aerospace | Defense | China | Market Recon