Broader equity markets did experience one of those days on Tuesday that professionals look out for. That being a a lower close for either the S&P 500, the Nasdaq Composite (or in this case, both) on increased trading volume. Now, to put this development in some perspective. Yes, this counts as a day where there probably was at least some institutional profit taking, given that these indices still stand near the top of their "forever" charts. A more aggressive selloff on significantly higher volume would be the next sign to watch for right now as this week progresses.

However, you'll recall that in yesterday's Recon, we did discuss how when Relative Strength kisses that magic 70 level, an algorithmic response is provoked literally every single time regardless of whether or not markets regain trend. This condition may or may not last for a few sessions. This is, in my opinion, not time to impersonate Chicken Little, but time to pay attention to where and how the next shoe drops. With a backdrop created by better than expected Retail Sales for June, as well as a precipitous one day decline in crude futures pricing. The improved retail sales data for June, on top of better manufacturing production numbers within that lackluster looking headline June Industrial Production print forced the Atlanta Fed to revise the GDPNow model for second quarter growth from 1.4% to 1.6%. (Atlanta will revise again on Wednesday - today - in response to Housing Starts.)

Stay with me... this, in turn reduced probabilities for a 50 basis point rate cut at the FOMC's July 31 policy meeting (never likely in my opinion), as well as slightly lowering chances for a third cut for 2019 in December (still could go either way, in my opinion). This chain of events is complex. Hope you're still here. This changing condition caused bond trader to sell 10 year notes, which pushed out that part of the yield curve (at least on Tuesday morning), allowing the 90 day/10 year spread to come moderately close (once again) to un-inverting. Early Wednesday morning, that spread stands at -3 basis points, while the also watched 2 year/10 year spread remains badly mangled at -24.

For my non-economist friends, while yes, June manufacturing production (within June Industrial Production) did print at +0.4% m/m, this production still stands at a level that was seen as "quite awful" as recently as March. Some will point toward the fact that "manufacturing specific" Capacity Utilization improved to 75.9%. Oh boy. Strike up the band. Know what's considered normal? The low to mid 78%'s. It's definitely good to see a bit of a rebound in manufacturing production, but ever run the first mile of a race faster than you should have, and the group you're running with isn't slowing down? Without an advantageous trade deal agreement with China, this could be that.

Softer oil prices and some key earnings releases such as JB Hunt (JBHT) , United Air Lines (UAL) , and Canadian Pacific Railway (CP) , the latter of this trio is not a component, put some serious life into the Dow Transportation Average. The index ran 1.8% on the day, and closed 5.2% off of Friday's low. 5.2% gang. In three days. What happened? Besides some decent earnings? 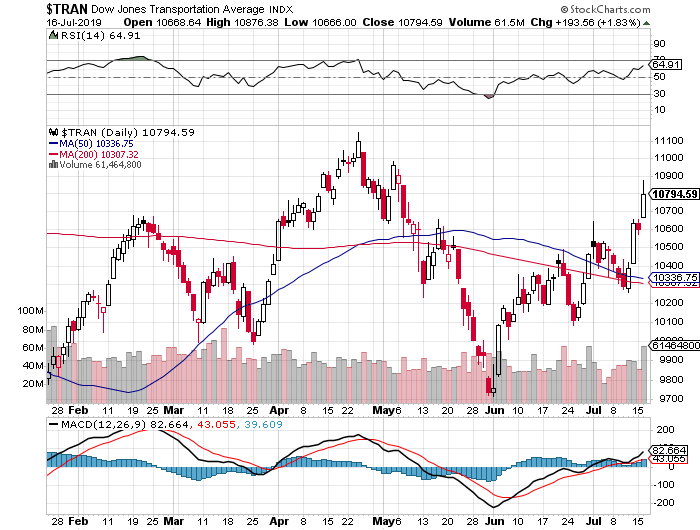 See the 50 day and 200 day SMA's? The two key moving averages have largely been running together. The two lines being pierced simultaneously last week provoked exacerbated algorithmic response that only gained momentum on those three earnings. See CSX (CSX) earnings last night? Yeah.... miss, miss, cut guidance. That should leave a nasty mark on that stock as well as the index this morning.

Guiding Those Who Need Guidance

You will read in Wednesday's newspapers, and you will hear opinion from several quarters of the financial media, how there is no need for short term rate cuts any time soon. Well, good for those of you who feel free to opine in this manner. Yes, we all see that domestic economic data for the month of June is showing improvement, in consumer spending, in manufacturing production, and in job creation. Hence, those whose ability to develop economic thought stalls at the first level might surmise that all is just peachy keen, and that well enough should be left alone. Well, gang, we're not playing checkers. In fact, the game afoot is far more complex than that. At the risk of sounding arrogant, let me explain.

First off, we do not live in a box. If all was indeed well, the darned yield curve would not have become, and would not have remained, inverted. Understand? I'm slowing this down as much as I can. Real threats in the form of trade tensions with China, and perhaps with the EU, have not gone away, nor has the fact that much of the global economy has been and is still slowing. These other central bankers are not going to refrain just because the U.S. economy isn't falling off of a cliff. While I remain less than convinced that three rate cuts by year's end is necessary, preventing the U.S. dollar from appreciating too aggressively while repairing credit conditions are "job freaking one". This is not about reacting to profound economic weakness, this is about preventing it. I mean, I love some of you folks but really, we're not going to play last year's schedule next year. Comprende?

The only domestic macro-economic slice of data that should prevent any attempt to repair the yield curve post-haste through manipulating the short end, and thus controlling dollar valuations, should be multiple "hot" prints for core consumer level inflation. Those at the central bank seem to finally grasp this reality. Let's hope this sudden outburst of less developed thought does not impact the committee's thinking on this. Anyone else ever stop and think what 2018 full year GDP might have been, or where U.S. dollar valuations would be... without four rate hikes, and with a less aggressive balance sheet management program? For the environment provided, U.S. monetary policy remains too tight. This is not rocket science.

I scanned Amazon (AMZN) all day, in fact for two days, as Prime Day wound down. Nope, no sign of discounted F-35 stealth fighter aircraft. President Trump announced late Tuesday that the U.S. would indeed withhold sales of the world's most elite fighter to Turkey after that nation accepted S-400 air-defense systems from Russia. While I am not just a fan, but a shareholder of Lockheed Martin (LMT) , of course I understand the Pentagon's position on this. These anti-aircraft systems could easily be used by Russia to gather intelligence on just where and how any currently classified weaknesses in this high-tech craft might be exploitable.

Lockheed generates approximately 30% of revenue through the F-35 program, and the initial plan had Turkey purchasing 116 of them. One might expect that this will also end any manufacturing of F-35 components currently being done in Turkey, estimated at a rough 6% of each plane. The U.S. had offered Turkey Patriot missile systems as a substitute for the Russian hardware. This would have benefited Raytheon (RTN) , and perhaps ultimately Untied Technologies (UTX) . However, Turkey has apparently not gone for that deal.

The LMT stock under-performed both the Industrials as a sector and Aerospace as an industry on Tuesday, but not so much overnight. Lockheed for their part has indicated that buyers are already in line for the craft that would have found their way to Turkey, despite the president's statement that 'Lockheed isn't exactly happy." I think (my hope) is that Lockheed did in fact anticipate this development as just last week, CEO Marillyn Hewson, announced intentions to expand a plant in Milwaukee, build a new plant (for helicopters) in Pennsylvania and add 18,000 positions to the firm's payroll.

My thoughts? Not really concerned at this time. I have rolled with the punches with this firm all year, and that posture has paid off handsomely. 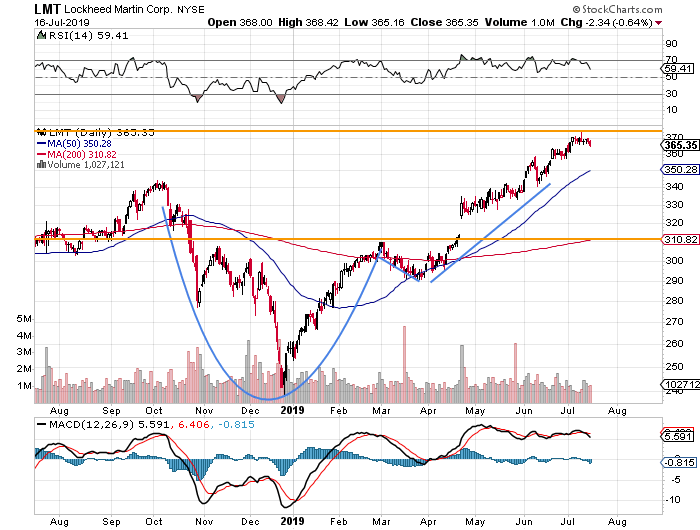 Real concern for me will not impact my decision making unless the 50 day SMA (350) is threatened on development of a downtrend. It is there that I cut lose a pound of flesh. I will also reduce should my target price of $375 to be captured at some point. Lockheed remains a Sarge fave.

Two items of note. One... Netflix (NFLX) and United Rentals (URI) report after the closing bell. NFLX has traded sideways all day. My thought is that potentially, I go into this one with a small position (too small to get hurt, large enough to have skin in the game) if the shares move substantially on Wednesday afternoon. My instinct would be to position counter to that move, and cover within minutes of the release if my trade were correct.

URI is interesting. Take a look. 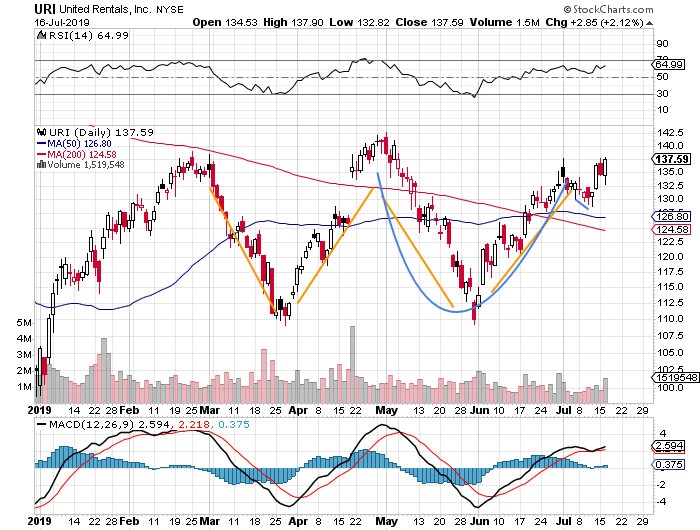 If a trader were to see this year's trading range as a double bottom (orange), then the pivot would be up around $142.50. However, if the trader instead sees a cup with handle (blue), then my dear friend, we are now trading at our desired point of decision. My thought? A good report this evening takes the first pivot, and perhaps gives us the second. A lousy report? $126. Worth the risk? Again, this one will be a late afternoon decision as well.

(Amazon and Abbott Labs are holdings in Jim Cramer's Action Alerts PLUS member club. Want to be alerted before Jim Cramer buys or sells AMZN or ABT? Learn more now.)

Get an email alert each time I write an article for Real Money. Click the "+Follow" next to my byline to this article.
TAGS: Earnings | Federal Reserve | Investing | Markets | Options | Stocks | Technical Analysis | Aerospace | Defense | Transportation