What Manner of Sorcery Is This?

Only a few days after the team had headed north at the conclusion of their annual Spring Training just a few miles away, my team, the New York Mets, found themselves back in Florida. In Miami to be exact. Brandon Nimmo batted lead off for the New York National League Nine. This was Tuesday night, a few minutes past 7 pm. I had settled in. The game on the television screen to my left. A plethora of market based information (never really too far removed) on the screen to my right. Feet up on top of my shredder, Iced Tea ready to go.

The Mets scored five runs in the top of the first inning. That captured a bit less of my attention than it usually would. What was that? In the corner of my periphery? S&P futures markets had started moving. In fact, they spiked. What manner of sorcery is this? I check all of my favorite internet haunts. Then I see it. Top story. Home page at the Financial Times. "US and China Draw Closer to Final Trade Agreement." Was there really new news here? Honestly, the question is moot. Algorithmic response had been provoked. A risk-on reaction was apparent not just in the equity index futures markets that I had sort of been watching, but across the Asian continent.

Wednesday, April 3rd. Gee whiz, time flies. Seems like just yesterday... aah, never mind. Today is the day that not only does the ADP Employment Report kick off "Jobs Week" in earnest, but some of the big dogs (U.S. Treasury Secretary Steven Mnuchin, U.S. Trade Rep Robert Lighthizer, and China's Vice Premier Liu He) get together in Washington, DC to continue what appears to be substantial progress already made on putting together a trade deal that will permit both sides to move forward unimpeded.

Everything Honky Dory? According to the piece at the Financial Times, Myron Brilliant (Best name. Ever.) at the U.S. Chamber of Commerce said, "Ninety percent of the deal is done, but the last 10 percent is the hardest part." It would seem, not just from reading the piece that ran overnight, but from reading everything that I could find on the matter over a stretch lasting the better part of a year, that the Chinese side is willing and has already offered to seriously increase mass purchases of U.S. goods in order to narrow the trade gap between the planet's two largest economies. A deal would also have to include verifiable pledges by the Chinese side to open their domestic markets to foreign participation, while making an honest attempt to police the alleged theft of intellectual property, as well as forced technology transfers as the price of entry to the markets in question. All concessions appear to have been made by the Chinese side in these negotiations.

The unease on the American side will of course be the method of enforcement. This is why the U.S. will likely try to maintain the use of trade tariffs as a tool (so far, much more effective than any mainstream academic economist truly understood when first implemented), perhaps a period of phasing out might be in order as reward for good behavior. The Chinese will obviously demand the immediate removal of those tariffs already in place. That's where we maybe get stuck.

What Is Clear to Me

The overt objective of this week's negotiation is probably to make sure that a meaningful summit takes place between the two heads of state (Presidents Trump and Xi) before the month of April were to end. A more realistic goal might be a plan that puts the two together at the G-20 clam bake in June. From an investor point of view, I think it important that the players keep the ball in the field of play. As long as there is something to look forward to, it becomes difficult for the worm to turn against our marketplace, even if first quarter corporate performance (tis nearly the season) is as sloppy as expected.

What those exposed to any potential outcome here must remain cognizant of are twofold, and these items may be insurmountable in practice. One. There is no trust here. For good reason. Two. What's at stake is so much more important than soybeans and semiconductors. We are really talking about global spheres of influence, and strategic military preparedness. Anything that puts either side at a tactical disadvantage in the air, on land or sea, or even in space... will be walked away from. At the expense of the marketplace, and rightfully so.

It's easy to simply say "be careful" out there. That's what talking heads that work for major financial institutions say on TV when they have never really hedged anything in their lives. Certainly not with their own dough. My thought? Truly hedging gets expensive. Portfolio volatility is most easily reduced through cash exposure. Stay focused where one stands more or less likely to feel impact from headlines that emanate from these discussions. Work always to manipulate net basis on all existing positions to one's advantage.

When The Games Stop

Truly a pleasure. Holiday season. Any season, really. To walk the aisles of the GameStop (GME) , shopping for family type, or sports related video games for my sons when it came time for gift giving. I knew that they would enjoy sitting on the floor in front of a TV screen, playing almost anything that we had given them. I also knew that once my wife would go out for an evening with her friends, that I could invoke "boys' rules" for that night if the homework was done. Boys rules meant dinner at Taco Bell, and an evening in front of that screen with my young children. Best nights. Ever.

The boys are now in their twenties. They work more than full-time. Video games are far less important to them at this stage of their careers. I can not tell you the last year even that I played anything more graphic than chess versus a computer. I may be a dinosaur, but video games as an industry are far from dead. In fact for those with substantial free time, they are as popular as ever. However, the future of the business is in streaming. I think that Alphabet (GOOGL) , and Apple (AAPL) are making that clear. Even the present state of the business is centered on downloaded content. Microsoft (MSFT) and Sony (SNE) are as eager to help with that (not to mention the publishers of the various games) as they are to sell the consumer their (fast becoming somewhat dated) hardware.

One day after GameStop announced an agreement to add two new spots to the firm's board of directors, the firm released fourth quarter financial results after Tuesday's closing bell. If you started looking for the positive last night, you may still be looking. Three significant business lines made negative contributions to revenue generation. New hardware, new software, and pre-owned games all hit the tape in decline. The firm earned an adjusted $1.45, badly missing industry expectations of $1.58. Revenue in aggregate missed projections by $220 million, while printing at a year over year decline of -7.8%.

Forward guidance was to put it politely, "nasty." For the current quarter, the firm is leading the community of analysts toward EPS of somewhere between -$0.05 to $0.00, while also guiding both full year revenue and comp sales to a range spanning from -10% to -5%. Oh joy. This guidance was well off of what the street was looking for. 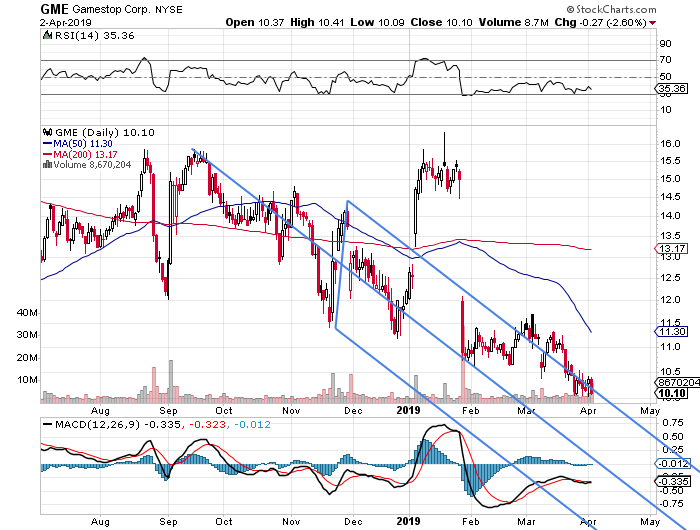 I want you to see a couple of items here. Most significantly, I think is the fact that even after occasionally optimistic spikes, the name, since early September has returned to it's awful trend. Something that traders may also find helpful is the very high volume experienced for this stock the day of the January meltdown. That is the highest volume day on this chart. Trading volume has also increased gradually over the past few weeks as the share price decayed into Tuesday night's results.

My thought? This is probably a seven or eight dollar stock in the making. I have no position, but am well aware that there is some retail participation here. Does the home gamer just chalk up this loss and sell the name? Understand one thing if you will. As of two weeks ago, there were 38 million shares of this stock held in short positions. The entire float only stands at 99 million shares. In percentage terms, this already clocked buy ticket dwarfs what you see at Tesla (TSLA) . Understand? These folks have to buy the shares. There will be a level of support. Somewhere. When? When some of these PMs start to fear that they have missed the bottom after having made the correct call. Those two new board seats? What was it that Princess Leia said to Obi-Wan?

Get an email alert each time I write an article for Real Money. Click the "+Follow" next to my byline to this article.
TAGS: Earnings | Investing | Markets | Options | Stocks | Technical Analysis | Trading | Digital Entertainment | Gaming | China