The closing bell had chimed. In another era, the last slice of paper would have sauntered toward the hard wood trading floor. Instead, traders silently checked their still changing P/Ls for perhaps one last time. Volume had been unspectacular. That much is true. Then again, that trading volume had been less than remarkable for oh... nine weeks or so. What is also fact is that both the Dow Jones Industrial Average, and the Nasdaq Composite had booked a ninth consecutive weekly gain. Slow, and steady in perception. Parabolic in reality, domestic equity markets have put together a truly daunting reaction to the even more intimidating Q4 2018 selloff.

There are nine innings in a ballgame. Unless of course...something happens in the course of the execution of said competition that pushes that game, any game into extra time. Some have chalked the late December turnaround up to a change of heart at the central bank. Others credit the pricing in of the likelihood of a trade deal between the U.S. and China. Both assumptions are accurate. What is obvious is that the 2800 level for the S&P 500 that all of us have pointed to is now upon us. 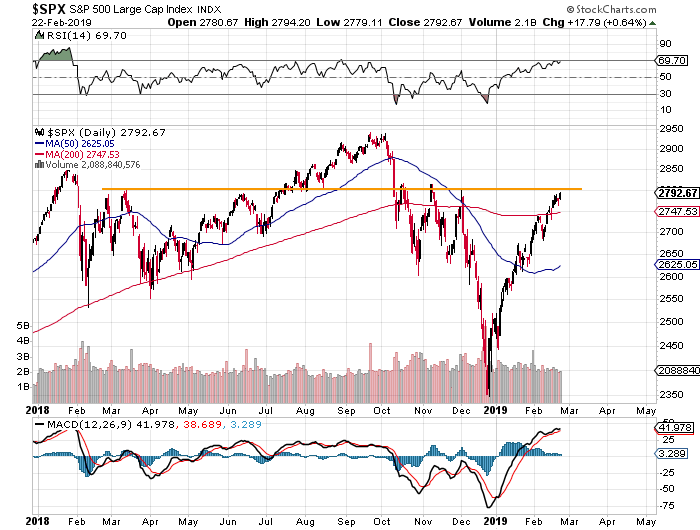 While market participants will lend Fed Chair Jerome Powell an ear this Tuesday as the central banker testifies before the Senate Banking Committee and again one day later in front of the House Finance Committee, we already know that unless consumer level inflation soon surprises to the upside, that targeting higher short-term interest rates is not anywhere on the radar. Thanks to the Minutes released last week, investors also are well aware that the Fed's balance sheet reduction program will likely wind down in coming months. As Doug Kass pointed out this weekend at Real Money Pro, the lack of liquidity at the point of sale is still very real, though we may whine about it a lot less when markets move in the direction we like.

Aside from some high profile public appearances to be made this week by those privileged with voting rights this year at the FOMC, the question for the trading community as this tenth inning of hardball opens is one of just how much of this "good news" on trade still needs to be priced in?

President Trump, as you well know by now, has made the decision that most market participants had expected, that being to delay the Saturday night/Sunday morning deadline for a deal with China that would have triggered an increase in already in-place tariffs of $200 billion worth of Chinese imports into the U.S. How long will any extension to the date last? No idea. The president did indicate that a final agreement would have to be made between himself and Chinese President Xi Jinping, and that a summit involving the two would be planned for perhaps late March at President Trump's property in Mar-a-Lago in Palm Beach. Florida.

By all accounts, substantial progress has been made on matters such as reducing the trade gap between the two countries through increased Chinese purchases of U.S. goods across the agricultural and energy space, as well as protection for U.S. firms from forced technology transfers and intellectual property rights infringements. Still, the U.S. looks for structural reform away from a system that favors Chinese domestic firms from foreign competition through government subsidies and currency fluctuation. Then comes the issues of how to enforce compliance and how to grieve violations of any agreement.

President Trump has alluded to 5G technology on Twitter. If China creates a more open environment for U.S. and all foreign industry on Chinese soil, does the U.S. in turn reduce the heat on Huawei? Is that part of any deal of trade. Are all matters including those of a legal nature or even those that might involve national security simply transactional at the end of the day? My thoughts on this? I am long some Verizon (VZ) . I am not long any AT&T (T) , but maybe I should be. I would have something from the old telecom sector in inventory as an investor. Just sayin'. Need some semiconductor names too.

It's All About Growth

In the end, everything really boils down to growth, or at least setting the stage for increased growth. This is primarily why you see WTI Crude futures finding some footing above $57 per barrel. This is also why, as we see the condition regarding trade with China improve, that we will also likely see steel tariffs targeting our USMCA partners, Canada and Mexico, come to a close with any trade deal regarding China as those tariffs were at least partially implemented to avoid an end run by Chinese steel exporters. It also mean that the European Union could be the next target as that bloc is the wounded bird at this time, and we all know that President Trump is dissatisfied with the current trade condition where as Europe is concerned. How do you win? You pressure someone when they can't afford it. That's elementary.

The poor numbers for December Retail Sales are now common knowledge. The death of retail. The end of the consumer? Government shutdown? Monetary policy? E-commerce? Likely all of the above had an impact. Then again, the data within the data did not paint a very pretty picture for non-store retailers either, so is there a problem with the December data? Until we see a revision from the Census Bureau, we won't really know for sure. One thing we do know is that short interest in the SPDR S&P Retail ETF (XRT) is a bit out of control.

The ETF trades a rough 4 million-plus shares a day. There are a little more than 5.8 million shares outstanding. As of the end of January, according to the Wall Street Journal, more than 21.5 million shares were held in short positions. That was a 5% increase from two weeks earlier. According to an article published at the Financial Times on Sunday, this short interest has continued to grow in February. So, just how crowded is a trade when the numbers of shares held short is five times the daily volume? Just how wise is it to remain short that trade if you happen to be that guy? Squeeze coming? No promises, but the thought is not crazy. Oh, by the way... a trade deal with China is good for the retailers in case that was unclear.

For Home Depot (HD) , revenue is expected to have increased 11% year over year. Profitability is expected to have gapped higher, perhaps much higher. What we need to know is what to do ahead of the firm's Q4 earnings release this Tuesday (tomorrow) morning. You all know that I am long these shares. You may or may not know that I sold some of these when the market melted last December. That wasn't such a bright move. I managed to hang on to about 60% of my original size rather than sell it all. That was much smarter, and really why Jim Cramer always preaches on both incremental entry as well as incremental exit. The method protects one from oneself. 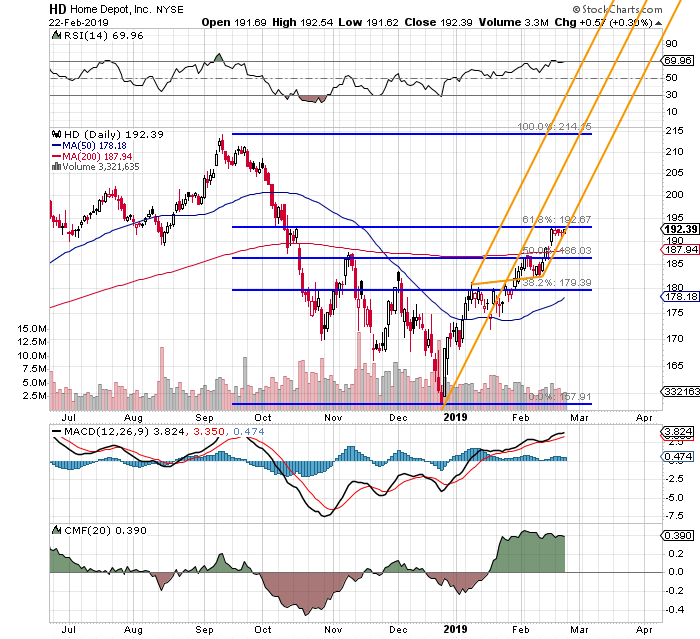 One thing is for certain (in my opinion)... Relative Strength, Money Flow, and the daily MACD all seem to be at or near unsustainable levels. Never mind that absurdly ridiculous looking Pitchfork that appears nearly vertical. What I do see here is that all of these overtly "too good to be true" indicators are running hot precisely as the shares run into the all-important 61.8% retracement level coming off of the Christmas rebound. Likely, I shave the long just a wee bit more ahead of earnings, as there would be much second guessing going on in my brain should I not, and then live to regret that.

What A Nervous HD Long Could Do (minimally)

The idea: The trader is buying downside protection at $190 that expires this Friday, and partially subsidizing that expense by agreeing to buy the shares back (sell similar protection at a lower level to someone else) at $182.50 should disaster strike. What the trader is trying to do if successful is extract $7.50 worth of capital from a long position in recognition of possible resistance induced by a news event, at the net cost of $1.54, resulting in hopefully... a realization of $5.96, leaving the long equity position at it's original size by the end of the week.

Get an email alert each time I write an article for Real Money. Click the "+Follow" next to my byline to this article.
TAGS: Earnings | Economy | Federal Reserve | Investing | Markets | Stocks | Technical Analysis | Trading | Retail | China