The song remains the same? Perhaps. Perhaps not. The broader domestic equity indices (The S&P 500 in particular) closed within striking distance of their own 50 day SMAs yet again on Wednesday night. Nothing new there. Trading volume for the day (an up day) was lighter than it had been on Tuesday (a down day). Gotten used to that. The environment starts to evolve there. Different this time? Different enough to change long-term outlooks? No. Different enough to trade the environment? To at least entertain the thought that the current economic expansion can even this late in the game... be extended? It can.

The potentially changed environment started to become visible very early on Tuesday morning, as the Chinese government appeared to make some effort to bring the widespread protest in Hong Kong under control peacefully. Since then, legislators in the UK have voted to push back on a no-deal Brexit, and seek a third extension whereas membership in the EU is concerned. It goes on. A coalition government is agreed to in Italy, reducing the need for new elections there. Now, early on Thursday morning (Wednesday evening in NY), China's Ministry of Commerce announces that Chinese and U.S. officials will meet in Washington in early October. Equity index futures reacted to the upside immediately.

This will be the first formal trade talks between the two nations since the July meetings in Shanghai that appeared to go nowhere. This scheduled meeting came about during a phone call between U.S. Trade Rep Robert Lighthizer, U.S. Treasury Secretary Steven Mnuchin, and China's Vice Premier Liu He. Let's not lose focus on just how important the date of October 1st is here. There is no doubt that the trade war between the U.S. and China has crimped global economic performance. There is no doubt that economic growth has been slowed in both the U.S. and China, in my opinion. China more so. President Trump has made October 1st the next deadline for ramping up tariffs on Chinese imports into the U.S., and then another round is slated for December 15th.

One could easily see reason for China to make overtures to calm protest in Hong Kong well ahead of that date. One can also see that while it would be fantastic should substantive progress be made at this October meeting between leadership of the planet's two largest economies, that should this planned meeting provoke President Trump to delay the October 1st deadline for increasing tariffs that such a news event would present as an opportunity for the communist propaganda machine as October 1st is also the date where the mainland will celebrate the 70th anniversary of Mao Zedong's military victory over Chiang Kai-shek, forcing the nationalist army to retreat to Taiwan, now an autonomous island that the mainland still claims, but has no control over.

U.S. officials for their part have expressed cautious optimism, a willingness to take a "wait and see" approach, algorithms react to headlines and have not yet developed a healthy enough sense of pragmatism to project prospects for practical application to developing news stories. This is one reason why I no longer see equity markets as being quite as forward looking as maybe they once were. As human control over the point of sale has been replaced, decisions with an eye toward future performance have also been replaced... by keyword readers and momentum bots. Hence, price discovery once though to project a six month outlook for investors has migrated over the past 10 years into what simply looks like a snapshot of "what's happening now." This is perhaps a debate best left for another piece at another time, but attempting to interpret the environment one must excel in is the first step toward identifying what must change in order to successfully adapt.

It's Thursday morning. What headline level news events have done to non-equity markets is key. U.S. dollar valuations are finally being afforded a chance to breathe a little easier, as Pound Sterling reaches nearly $1.23, and the Euro rises above $1.10. Key to note here, is that the ECB steps to the plate next Thursday (September 12th), as manufacturing PMIs across the region simply crash. Also key to note here is a horrific report for German Factory Orders for July early on Thursday that coupled with an awful looking auction for 10 year French paper, meaning that this bit of rest for the U.S. dollar could be temporary.

The U.S. Treasury yield curve has fortunately steepened in recent days, and this morning in particular. Take a look at the recent change in trend for the 2 year/10 year spread.

While the 3 month/10 year spread has been inverted for months now, and has served as the most reliable predictor available to central bankers where as economic contraction is concerned, at least that spread appears to have stabilized.

I've got one more for your bag of tricks, gang. Some retail traders get screwed up when we speak of bond prices and/or yields, as they obviously work inversely of each other. There is another way for non-financial professionals to interpret economic conditions and make loose projections for the trajectory of not just economic growth, but also interest rates. You all think of Gold as something of a safe haven. Gold has soared of late. You all think of copper prices as reflective of demand for construction. Copper has suffered for a bit.

Some traders use futures pricing, I use the ETFs as for me those prices are easier to make use of. Very simple. Just divide the last sale of Gold, in this case SPDR Gold Shares ( (GLD)  last sale $146.66), by the last sale of Copper, in this case the United States Copper Fund ( (CPER) last sale $16.23). The ratio that this simple math provides is the charted over time to create trend. Check this out.

A strong possibility exists for a second straight down day for this ratio. That means higher bond yields, at least for today. Tomorrow? I just told you, markets are no longer forward looking. The Fed's Beige Book reported "weakness" in agriculture, and outright contraction in manufacturing. Otherwise everything else was growing "modestly." Yeah, no kidding. For those keeping score, the Atlanta Fed's GDPNow model took it's snapshot for Q3 real-time GDP down to 1.5% annualized on Wednesday. This while futures traded in Chicago currently price in a 95% chance for a 25 basis point reduction to be made to the Fed Funds Rate on September 18th, with a very small chance of a 50 basis point cut. Trust the ratio? As much as anything else.

Remember that blip of information regarding 20 U.S. companies with investment grade credit ratings going to the bond market to raise some $28 billion in new dough on Tuesday? The list included Disney (DIS) , Deere (DE) , Caterpillar (CAT) , and CSX (CSX) ? Well, Apple (AAPL) joined the fray on Wednesday despite the firm's massive cash position. Apple borrowed $7 billion themselves on Wednesday. The interesting thing here is that with such recent pressures on rates, Disney, Deere, and now Apple have all been able to issue 30 year paper at yields below 3%. Think Apple can out-earn the borrowing costs associated with such an issuance? Disney? Yeah, me too. I'm still long the two of them. While I abhor increased deficit spending, and see it as an eventual nail in the coffin, I understand that there is no political will on either side of the aisle to rectify that reality. The U.S. Treasury should probably compete in greater size, in real-time, at longer maturities.

On Tuesday, I threw General Dynamics (GD) , Merck (MRK) , and Walmart (WMT) at you as names that might be technically poised for breakout. I have another one (that I'm long) that I think might be doing just that as we speak. If you haven't lately, take another look at Mastercard (MA) Here's the chart... 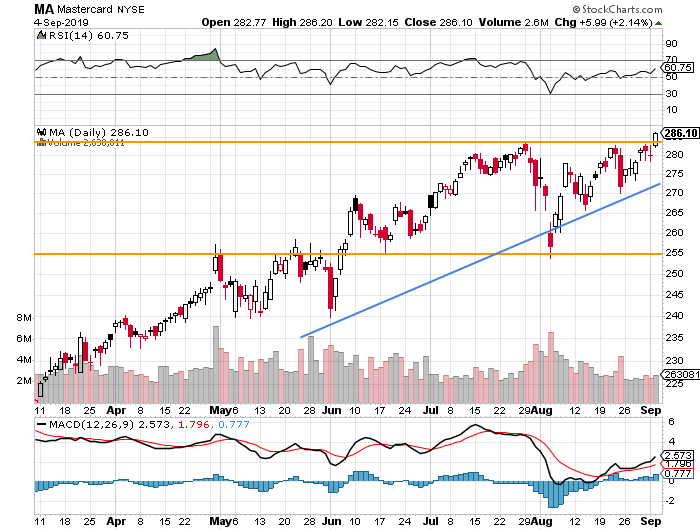 I see two patterns, both bullish. We have a pivot of roughly $283, that had been tested three times prior to Wednesday's piercing. We either have a twice tested bottom of $255, that would create a Flat Base, or a series of higher lows that coupled with the pivot would create a loose Ascending Triangle. Need Fin-tech exposure? In my opinion, this is a good one, otherwise it would not be on my book.

Get an email alert each time I write an article for Real Money. Click the "+Follow" next to my byline to this article.
TAGS: ETFs | Federal Reserve | Gold | Investing | Markets | Stocks | Technical Analysis | Trading | Financial Services | China