Meaningful? Honestly, I am not really sure. Equity markets took a sharp tumble just before 12:30 on Monday, but did stabilize rather quickly. What I noticed at first is that trading volume did rise on Tuesday from Monday in aggregate for constituents of both the S&P 500 and Nasdaq Composite. This would be the first time in a couple of weeks that this is true on a down day after an up day for the S&P 500, and the first time since late December for the Nasdaq Composite. So, the takeaway is negative, Sarge?

Possibly more telling than headline data one day ahead of the expected signing of a Phase One trade agreement between the U.S. and China was, I think... the composition of the support found in the marketplace. We have already determined that equity markets for the most part moved sideways on less than significant shifts in trading volume. Year to date (Yes, today is January 15th), leadership has come from the Information Technology (software, semis), Communications Services (Internet), and Industrial (Defense, Transports) sectors. As the worm turned just a bit after lunch on Tuesday, and volume spiked (unusual for mid-day, post Bloomberg's story on Phase One), daily flows moved toward Health Care, Utilities, and Staples.

In other words, flow moved from growth and value toward a more defensive stance.

I want you to get this. The Bloomberg story, though it told us nothing that we did not know, was seen as mildly disappointing. Yields paid by the U.S. 10 year note contracted throughout the day on Tuesday. In fact, the 10 year gave up more than 1.86% late on Monday night, and gives up a rough 1.79% as I bang out this piece on Wednesday morning. Conversely, the U.S. 3 month T-Bill (Stay with me, this is the most important thing you'll read this morning), that paid less than 1.54% on Monday night, now offers a yield of 1.57%. (They are buying long-term debt and selling short-term debt.)

What that means, straight-forward, is that the most important spread for the marketplace as well as the economy has contracted from as much as 33 basis points to as little as 22 basis points in just about a day and a half. This is also the primary reason why the banks as an industry group failed to hold their early gains on Tuesday.

Recall that May is when the 3 month/10 year yield spread inverted and it actually held in negative territory more than just momentarily. May is when the S&P 500 began its run of closely mirroring this spread. Now, remember that this spread remained negative from mid-May into early October. October is when the FOMC initiated the balance sheet program with the overt targeting of short-term interest rates. The health of this spread is where our market's rapid increase in valuation metrics has come from. See above that with the sudden lack of health in this spread, the S&P 500 has merely paused (maybe), but not come in as has that spread.

Is this the end of the correlation between the two? Nearly all dependable correlations do end at some point. That said, short-term modern price discovery is driven quite simply by algorithms that read headlines forcing slower participants to react to a trend not of their making. The condition of trade between the U.S. and China, as well as the election in November, will produce headlines, yes, but also require a continuance of developed thought based on a near-permanent state of cognizance. The algos control execution in the short-term, but capital flows from here will either confirm, or impact trend. We are going to need to see growth in corporate profitability. We can do this. Stay highly motivated.

Sign right here? The piece at Bloomberg that did at least temporarily rattle the markets, or at least juggle Tuesday's rotational leadership, simply makes a few points that do not stray from what I thought to be understood. Perhaps I'm wrong. Perhaps the markets "expected" to be pleasantly surprised? Existing tariffs on Chinese imports are expected to stay put until after the U.S. election in November. Okay, maybe placing a stated date on such a possibility such as "after the election" or "no sooner than 10 months" which also shows up early in the piece might be more detailed than what we had, but I think we all expected to have to see where Phase Two went before such policy would reverse further than had already been announced.

Quoted, also at Bloomberg on Tuesday evening, Treasury Secretary Steven Mnuchin stated the obvious... "These tariffs will stay in place until there's a phase two. If the president gets a phase two quickly, he'll consider releasing tariffs as part of phase two if not, there won't be any tariff relief. So, it has nothing to do with the election or anything else. There's no secret agreement." Separately, U.S. Trade Representative Robert Lighthizer indicated that there is a confidential annex detailing purchase amounts within this Phase One deal, and if I recall correctly, the request for confidentiality came from the Chinese side.

One concern for traders and investors would be that the good cheer created by the development of this Phase One deal, as well as actions taken by the FOMC, are nearing or at the point where the headline risk points in the other direction. As stated above, markets will need to see improved corporate profitability in 2020, and the table will have to be set by the backdrop for economic growth from a macro perspective.

Have I been aggressively selling this market? Define "aggressively". I have reduced all overweight longs to their intended size, I will say that. I will also say that existing longs are better hedged right, or at least run with a lower net basis now than earlier this week. Concerned? Only mildly. Really just making sure that I keep most of what I have earned. Being my family only eats when I kill, I'm funny that way.

Talk about concerning. I know that you saw the NFIB Small Business survey that hit the tape well before markets opened on Tuesday. A headline print of 102.7 for December, which is still a historically strong number, but landed well below both the November print as well as December expectations. What I did find possibly concerning within the components of this release was the weakening turn in the employment related parts of the survey.

Just days after the BLS reported a December employment situation that underwhelmed (although admittedly at already robust levels) across several metrics used to measure the demand side of labor markets, we get this. Now, the NFIB data is not awful by any measure, but in a way, does support what was soft within the BLS numbers. Of those polled by the NFIB in December, 27% of small business owners reported job openings for skilled labor. This is down from 31%. 13% of those polled have openings for unskilled labor, down from 15%. While finding qualified applicants remained the priority issue for many small employers, 53% overall either hired, or tried to hire in December. Sounds good, but is down from 61% in November.

Certainly not the end of the world by any stretch. Something economists and the like are going to watch for in January. A trend forming? I'll let you know in March. Maybe April.

Incredible. Remember when the Walt Disney Company (DIS) announced that the new Disney Plus service had seen 10 million sign-ups on day one? On Tuesday, came news from Sensor Tower that the service has experienced 40.9 million mobile downloads from either the Apple (AAPL) App Store, or the Google Play store for Android, a product of parent firm Alphabet (GOOGL) . Why is that such a big deal? For one, other streaming services such as Netflix (NFLX) and Hulu (already under Disney's control) have stated in the past that roughly between 67% and 75% of streaming entertainment happens on smart TVs, which were not included in this number. Nor were gaming consoles or devices that aggregate streaming offerings such as those offered by Roku (ROKU) .

Sensor Tower also revealed that Disney Plus had generated around $97.2 million in user spending two months after the launch. In related news... Disney Plus ended up being the top-trending Google search term... for the entire year of 2019.

Perhaps the best news for Disney is that the service is not yet all that available internationally. Most of these numbers have been generated within the United States. The service is only live in the U.S., Canada, Australia, New Zealand, and the Netherlands (which was the test market). Disney has already stated the intention to go more international in 2020, and has aimed at between 60 million and 90 million global subscribers. 2024 is the target year for stand alone profitability for Disney Plus. The markets noticed this news on Tuesday. 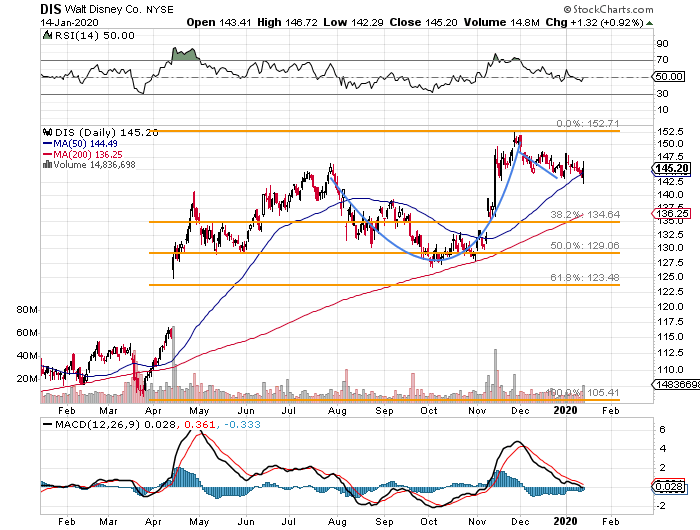 Looked at one way, our previously discussed cup with handle has extended significantly to the point where the 50 day SMA of $144.49 has become a point of inflection more focused on than the existing pivot that would be the $153 level. Now, take a look at this, I'll erase the Fib levels and the cup with handle.

See that purple line? Ex-the cup with handle, that level was resistance to the April rally that showed up again in June. Now, remove the noise, and voila! That spot has been used as algorithmic support multiple times over the past six weeks. The algos see this spot !!!! Not the guys running the algos. Those guys are too busy laughing at 15 year-olds falling off of skateboards on YouTube.

Camo up your face, hands, ears and teeth, gang, and do something about that scent. No insect repellent. We shut up, and we focus. Next time the stock moves toward that level, as the intellectually lazy who think putting in a full day equals hard work chuckle at their social media accounts... we pounce, and they'll never see us coming.

Get an email alert each time I write an article for Real Money. Click the "+Follow" next to my byline to this article.
TAGS: Investing | Markets | Options | Politics | Stocks | Technical Analysis | Trading | China