Tonight's the night. In a week heavy with earnings, it is Monday that appears if not a little thin, at least thinner than will be the next three evenings that come just filled with headline quarterly earnings results. The corporate news on Monday afternoon will most likely be made either by digital textbook provider Chegg (CHGG) , or Twilio (TWLO) , a cloud-based platform enabling developers and/or employees work, and communicate in real-time. In other words, these are firms that benefit from an environment where schools and businesses are forced to operate virtually. I have traded both... Chegg more recently. Already took my leave there. Let's take a look at old friend Twilio. It's been a little while.

(Not Such) Great Expectations

You will hear a closing bell. A short wait later, Twilio will report the firm's third quarter financial results. One has to remember that the rush for businesses that could move on line, to actually do so, boosted Twilio's second quarter performance. The firm posted a surprise profit on a revenue beat. The firm also guided third quarter revenue above what was then consensus. The problem could be that demand for what Twilio does has been brought forward, that a relatively quiet period over the summer as far as the virus is concerned may have led to an uneven third quarter, even as parts of the economy struggle with both the virus and remaining open here in the fourth quarter. Keep in mind that this firm was always expected to perform far better in 2021 than any year prior. The set-up was for next year. This year kind of happened, due to negative circumstances ahead of time.

Also bear in mind that the firm recently announced (earlier this month) the definitive agreement to acquire Segment, the fast growing data platform provider. Segment does have some customer overlap with Twilio, and is growing (at least last year) at an 88% rate of growth ($180 million). Does this allow Twilio to increase its pace of growth through cross selling of services, as clientele make use of not just messaging, but big data services in a one stop shopping kind of way? It could.

The stock is overvalued. At least for now. Margin will suffer at least for now. Q3 gross margin is expected to land up around 56%, while operating margin remains negative. Do I need Twilio? Is there something to like here? Certainly. Technically speaking, I think the chart is something that shareholders need to focus on, like right now. 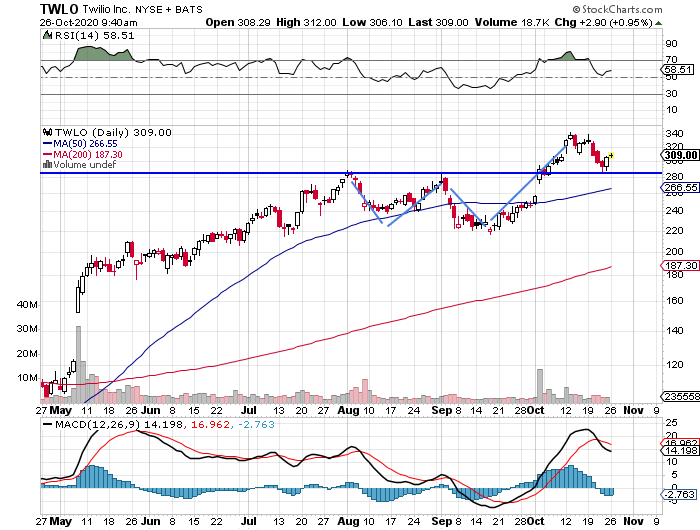 The fact is that TWLO offered up a loose "double bottom" that did provide a breakout. Just one thing. That pivot, at the $283 level would have provided a target price close to $340. The shares peaked in mid-October at nearly $342. In other words, a purely technical trader has already rung the register on this name.

Just one thing. These same shares found support at that very pivot point just last week. If one is still long the shares, I think that your target would be that $342 high. However, whereas your panic point would have probably been in the low $260's, now I think you move it up to pivot. That spot cracks, and I think it will crack hard. I mean this is a stock that is still up 352% from its own 2020 low.

Thinking a poor reaction? Maybe going with a Bear Put Spread is the risk averse way to go? Similar to a bull call spread for a bullish thinker.

Get an email alert each time I write an article for Real Money. Click the "+Follow" next to my byline to this article.
TAGS: Earnings | Investing | Stocks | Technical Analysis | Trading | Business Communications

If You're Going to Play the Bounce Game, Just Remember You're Fighting the Fed

Buying into the decline is OK, but make sure you know where your stop is before you punch the key.

When Everyone Is Looking for a Bounce, It Isn't Likely to Last Long

The problem is that a large number of folks are looking to escape the bear market's pain and misery by selling into strength.

The leader of the Macau government says the city will welcome tour groups from mainland China for the first time in almost three years. It's part of the pattern of easing travel in East Asia.

Rising Rates: A Break of a 40-Year Trend Should Not Be Ignored

With 10-Year Treasury yields, it isn't where it's been, it's where it's headed.

Seems Like We Are Getting Close to a Rally

When equity folks are fretting more about interest rates and currencies than stocks, you know they are concerned.