Rather bearish? The enthusiasm on Monday had been built upon the optimistic capital flows of a week ago that were dressed up nicely as a supportive policy story ran at a government owned Chinese newspaper. This took global equities up to a point where there was a somewhat broadly overbought condition that could no longer be supported by trading volume, at least here in the U.S., on Tuesday... price discovery became quite noticeably heavy late mid-morning, and only became heavier as the day wore on. By the time that second bell had sounded its last, the market could not have closed soon enough. As equity traders took some profits, the U.S. dollar found a backbone, U.S. Treasury securities found support, and front month futures for physical gold moved back above the psychological $1800 level. For those wondering, the record high trade for the yellow metal printed at $1888.70 back in 2011.

What changed on Tuesday? Is it time to go now? Well, it's never a bad time to protect oneself when one sits upon large profits in any market. I would think the majority of market participants are there now. This time would be no different. Not that this market can not go higher. It can, and if the printing press stays hot it ultimately will. I think we all know that this market can do whatever the flow of capital dictates and that the speed of this move will likely bear an ability to surprise. If we have not at least learned this, then we have learned very little. We already know that second quarter earnings are expected to be awful. So poor in fact that there is some chance that markets have already priced in better than expected corporate performance.

We already know that more will be expected from both monetary and fiscal authorities. What exactly can be done in regards to policy? There are reports that might infer the Trump administration's intent to seek another $1 trillion in fiscal support prior to month's end. This may have been a factor in the pressure placed upon price discovery on Tuesday. What House Democrats had already passed added up to more than $3 trillion. These numbers are perhaps points of negotiation. Investors understand this. Algorithms may not, depending upon their level of sophistication.

The facts are plain. Markets, by any broad measure, now stand well above their March lows. The Nasdaq-based indices stand obscenely higher than their own simple moving averages. Pullbacks can not surprise at this point, especially after putting together very nice looking winning streaks. I make no promises, but the breadth of Monday's markets were far less than impressive... for the bears. Trading volume fell from Monday's quiet levels at both the New York Stock Exchange as well as the Nasdaq Market Site. Index based (as opposed to exchange based) aggregate trading volumes printed 4% below the 50 day SMA for the Nasdaq Composite and an incredible 19% below the 50 day SMA for the S&P 500. In other words, there is not yet broad enthusiasm to jump off of the "risk-on" trade. Of course, as I see this, so much can change in a day's time, or even in an hour. I take nothing for granted. By the way, losers beat winners by a rough 3 to 1 at the NYSE, and by less than that at the Nasdaq. The margin of victory for declining volume over advancing volume came to little more than 2 to 1 at the NYSE, and just 1.48 to 1 at the Nasdaq, despite nine of eleven sectors closing in the red.

This, That or The Other Thing?

While Tuesday's reversal may have been driven in part by the administration's "smaller than expected" dollar amount when entering into next phase fiscal support discussions, the change in direction could have also had roots in some Fed speak, or in further steps taken by New York Gov. Andrew Cuomo in regards to those wishing to travel to the Empire State. On Tuesday, Fed Governor Randal Quarles, who spoke in New York, was quite blunt. Quarles, as quoted in the Wall Street Journal said, "The Covid event is not behind us." No kidding. Quarles then added... "We know that the financial system will face more challenges." Quarles became slightly more detailed in referring to prospects for employment as "bleak" for many, and that perhaps our future will "inevitably involve an increase in nonperforming loans and provisions as demand falls and some borrowers fail."

Does that scare you? It should. Randall Quarles just told you that more likely than not, there is another shoe to drop. For the banks. Net interest margin looks okay? Relatively, yes... if everyone meets their obligations. The coming round of defaults and/or bankruptcies is out there. This, as described by Jim Cramer at Real Money on Tuesday, is why bank stocks are nailed to the bottom of their respective ranges ahead of earnings as much as for any other reason including returns to shareholders. By the way, with that looming round of bankruptcies will come decreased demand for labor. That's inevitable. The only real defense as long as the pandemic rages will be increased deficit spending. Ahh, we circle back to those negotiations. The July story.

In addition, Gov. Cuomo added Oklahoma, Kansas, and Delaware to a list of states that now number 19 whose residents as well as those returning to the area will face travel restrictions upon entry into New York, New Jersey, or Connecticut. Such travelers, not that everyone is out and about as Covid-19 spreads, are required to self-quarantine for 14 days. Word is that both Wisconsin and New Mexico are likely to be added shortly as well. These moves in theory impact the potential for travel for more than half of the nation's population. This is why the Dow Jones US Airlines Index was off 5% on Tuesday, led by United Airlines (UAL) and American Airlines (AAL) . The fiscal story would be why defense and aerospace stocks also took a dive. By the way, less demand for travel also negatively impacts demand for labor.

A microcosm of the broader story. For the apparel industry. Levi Strauss (LEVI) reported disappointing earnings on disappointing sales for the quarter. Margin dropped. Sales sagged regardless of region. The company was still unable to offer full year guidance, and announced plans to decrease headcount by 15%. My closet door is open right now. I can see my pants from here. On the top shelf. They are indeed a pair of Levi's. Underneath those Levi's are two more. Same size. I have lost a ridiculous amount of weight throughout this pandemic. I don't own smaller pants, but I do own belts. Buying much clothing in 2020? Me neither. Nowhere to go. Nothing to do. Nobody to see. Clothing in 2020, is nothing more than a utility. Style? Only if one loves the mirror. Now, we're getting into other problems. We don't need any of those.

I think so. Walmart (WMT) easily led the Dow Jones Industrials on Tuesday, as the shares ran nearly 7%. Of the Dow 30, only Procter & Gamble (PG) even shaded green. The other 28 names all went red as the day wore on. As a well-known Walmart bull, the news was music to my ears. According to a report at Recode, the retailing giant is now planning to move ever closer toward competing even more aggressively for the e-commerce dollar. Walmart, probably later this month, if this happens on time, is set to launch "Walmart Plus", a sort of loyalty membership program akin to Amazon's (AMZN) "Prime" that will price for the consumer at $98 per year to start.

What Walmart Plus subscribers will get for their money will be a video entertainment service, deals on products, and gasoline, as well as special times for windows for delivery. All for less than the $119 that Amazon (another name where I am a bull) currently charges for it's program. I'll simply tell whoever listens that during the height of the pandemic based hardships that New York went through this past spring that both Walmart and Amazon passed my personal test with flying colors. They have both earned my loyalty. 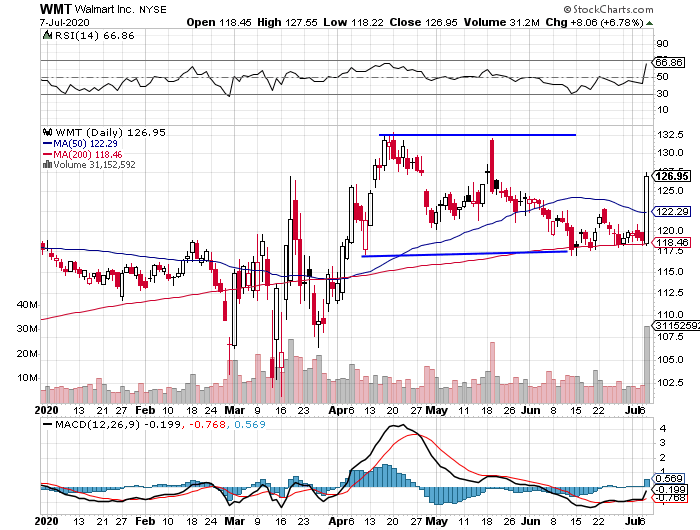 That said, even with the Tuesday pop, even with a surging reading for Relative Strength, and even with a now sharply better looking daily MACD, yesterday's run did little to change the trajectory of my thought process. The most important thing that this stock did on Tuesday was take the 50 day SMA. Should markets show Wednesday weakness, holding that line becomes key. Other than that, I think there is a long runway here toward any potential breakout.

The pivot in my opinion remains $132.50. Trades might make money in here, but investors need to see that level taken. Then we can talk about price targets in the $150's. Not before. Walmart does not report until mid to late August. For those already wearing the shares, selling (writing) August 14th $135 calls (in like sized amounts) for close to $2 a piece might just seem attractive.

Get an email alert each time I write an article for Real Money. Click the "+Follow" next to my byline to this article.
TAGS: Economy | Investing | Markets | Stocks | Technical Analysis | Trading | Banking | Retail | E-Commerce