Unless one avoids news entirely, all are now well aware of the Trump administration's imposition of a 5% across the board tariff on all of Mexico's exports to the United States. This new tax will go into effect on June 10th, and then rise in increments of 5% every month thereafter until reaching 25% by October. Of course, this schedule of tariffs can be halted and even terminated should the Mexican government take steps to alleviate the crisis at the U.S./Mexican border that has been top of the news cycle since the early days of the president's term.

So it is that all U.S. broad (and even narrow) equity indices opened in a state of deep decline. Some of the more highly impacted victims are obvious. Mexico is the largest exporter of food items to the U.S. Mexico also exports a whopping $52.6 billion worth of vehicles and $32.5 billion worth of auto parts across the southern border of the U.S. That puts pressure on an already slowing industry. Ford Motor (F) , General Motors (GM) , and Fiat Chrysler (FCAU) were all down disproportionately to the broader market on Friday morning. In addition to slower growth, this accelerates the decline seen for the transports, in particular the railroads. Union Pacific (UNP) and specifically, Kansas City Southern (KSU) , a recent favorite of mine that I was forced out of due to my own panic point rule, are being adversely impacted more than the others. As this is Friday, and we are in fact, traders, I start to wonder about beer. Beer? Yes, Constellation Brands (STZ) to be exact.

A Disgusting Plate of Nachos

So deelish. So good going down with a cold Corona, or better yet, a Modelo. Is it lunchtime yet? Unfortunately, these Mexican brands are indeed Mexican. Constellation Brands imports nearly all of the beer that they sell in the U.S. from Mexico. It's not just them, Anheuser-Busch (BUD) , and Heinekin (HEINY) also rely upon Mexican brewers to provide at least some portion of what they sell in this country. Back to where I was going with this. It was just one week ago that Morgan Stanley downgraded STZ to equal-weight, citing a margin for beer sales that has not been growing. Good chance now that this margin will indeed come under increased pressure. Either that, or costs will be passed on to the consumer, likely resulting in reduced sales. Sales growth you may recall for Constellation has been declining in year over year terms for successive quarters. Not to mention profitability that declined for the firm's fiscal fourth quarter reported in early April from the year prior.

The problem is this. STZ trades at 18 times forward looking earnings. The firm will report their fiscal first quarter in late June. EPS is expecting to print close to $2.11 on revenue of $2.07 billion. The current quarter should not be significantly impacted, but that PE number looks out over the next 12 months. How in the world can full year industry revenue consensus of $7.75 billion be trusted? It can't. That makes pricing this stock quite speculative at this point. Can the firm's 38% equity stake in Canopy Growth (CGC) help? That's a worthy investment. Probably. Still, much better once the use of cannabis in the U.S. is legalized on the Federal level, and then again, reliant upon a ratified USMCA trade deal. No sure thing. 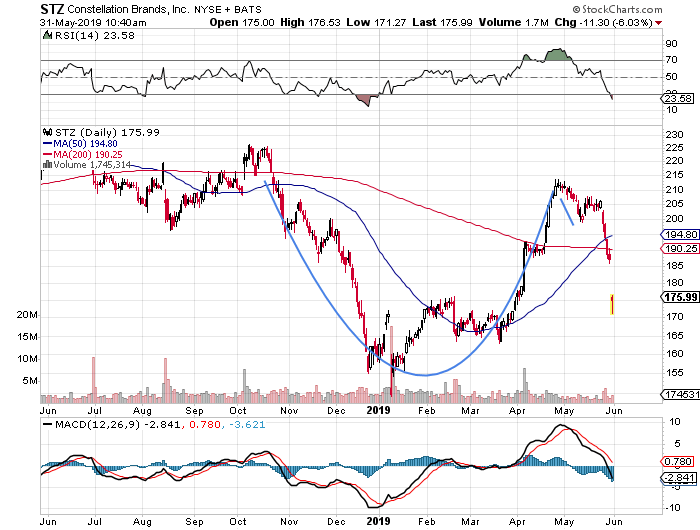 What I see is a cup with handle pattern that had been forming nicely. If the rebound in the share price experienced in early to mid-May had followed through, out pivot point would have been around $214. Suddenly that price seems miles away. For me to be interested in taking an equity stake in this stock in an environment such as this, I would need to see some kind of new pattern take shape, even a simple basing. For me, this one is a pass. For now. I have other fights to fight this day.

Get an email alert each time I write an article for Real Money. Click the "+Follow" next to my byline to this article.
TAGS: Earnings | Investing | Markets | Politics | Stocks | Technical Analysis | Trading | Beverages | Mexico