In his second "Executive Decision" segment of Mad Money Tuesday night, Jim Cramer sat down with Jim Cline, president and CEO of Trex Co. (TREX) , a stock that's down 20% from its highs after the company reported a five-cents-a-share earnings miss in April.

Cline admitted that TREX had a tough start to a new product launch that affected their earnings. He expected it will take one more quarter to work through those issues, paving the way for a strong second half. Cline noted that a cold, wet spring also delayed some home projects but that also will recover during the back half of the year. Overall, Cline said TREX did not see any significant slowing of demand, their issues were all on the supply side.

Cline continued by explaining that TREX products are made from 95% recycled materials, including plastics and sawdust, making them better and cheaper than their all-natural counterparts. He said the environmental story of TREX is largely unknown to many people. Finally, Cline said business remains strong in the commercial products division, where the company provides railings and other products to stadiums and other large venues. Let's see how the charts and indicators are shaping up.

In this daily bar chart of TREX, below, we can see that prices have not been able to launch a sustained rally the past 12 months. Notice how the upswings only last one, two or three months followed by pullbacks or corrections that give back the entire rally. This suggests that only traders are involved and not investors with staying power.

Prices have crisscrossed the popular moving averages but TREX is now below the declining 50-day average line and the cresting 200-day line.

The daily On-Balance-Volume (OBV) line has been in a decline the past 12 months telling us that sellers of TREX have been more aggressive all year.

The Moving Average Convergence Divergence (MACD) oscillator, a good trend-following tool, is now below the zero line in a sell configuration.

The weekly OBV line peaked in September and shows more aggressive selling in the subsequent months.

The weekly MACD oscillator is close to crossing below the zero line for a sell signal.

In this Point and Figure chart of TREX, below, we can see that nearby support was broken and a downside price target around $52 is being indicated. 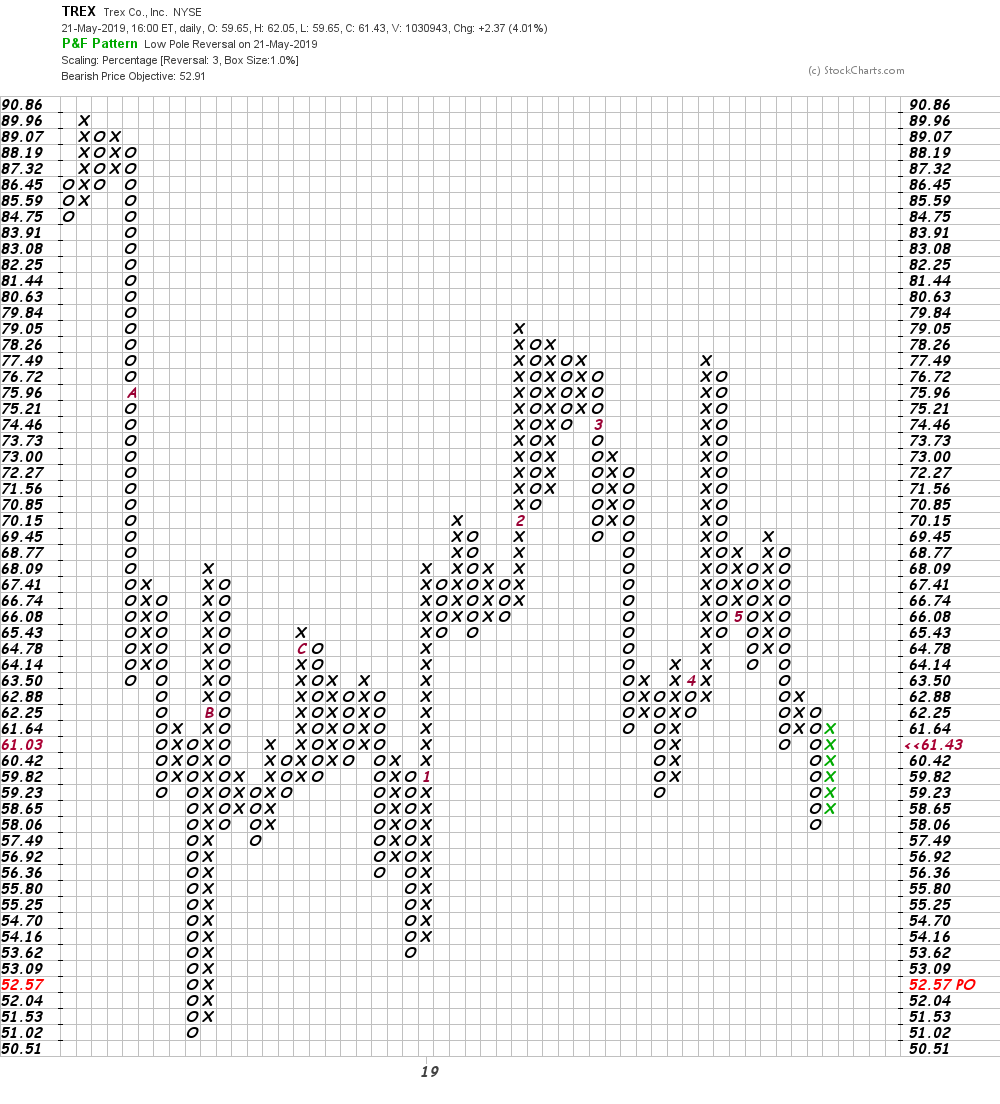 Bottom line strategy: All three of the charts above are bearish. Look for further declines in the price of TREX. A weekly close below $55 looks particularly bearish.

Get an email alert each time I write an article for Real Money. Click the "+Follow" next to my byline to this article.
TAGS: Investing | Markets | Stocks | Technical Analysis | Trading | Construction & Engineering | Mad Money | Executive Interview