Jim Cramer told viewers of Mad Money Monday evening that for most stocks earnings matter. Good earnings make share prices go up, and bad earnings make prices fall. But for a select group of high-profile growth stocks, earnings don't seem to matter at all. He said that he's dubbed these stocks the "magnificent seven".

The magnificent seven have become household names during the pandemic, Cramer said, and as long as we're waiting on a vaccine, these stocks will continue to rise.

First on the list were Netflix (NFLX) . We last reviewed NFLX a little more than a month ago on September 17 and warned that, "With a number of sell signals or bearish clues, traders should be more defensive or cautious on NFLX. The Point and Figure chart suggests a fall to the $416 area." Prices have not declined to $416 but weaknesses remain.

The trading volume has diminished since July and the daily On-Balance-Volume (OBV) line has declined since July telling us that sellers of NFLX have slowly become more aggressive.

The trend-following Moving Average Convergence Divergence (MACD) oscillator has made lower highs as prices have made equal highs the past three to four months.

In this daily Japanese candlestick chart of NFLX, below, we show the past six months of activity. In this chart we can see bearish patterns at the three peaks made in July, September and October. The $560 area is acting as resistance and the 50-day moving average line looks like it is cresting.
The OBV line shows that declining pattern from July and the 12-day price momentum study in the lower panel shows lower highs from July to now. This is a bearish divergence when compared to prices making roughly equal highs.

In this weekly Japanese candlestick chart of NFLX, below we can see a bearish candle (red) this month with a large upper shadow telling us that traders rejected the highs. The 40-week moving average line is still pointed up with a positive slope but we know this is a lagging indicator.
The weekly OBV line shows a declining pattern since June telling us that sellers of NFLX have been more aggressive for months now.
The 12-week price momentum study shows lower highs since July - again diverging from the price action.

In this daily Point and Figure chart of NFLX, below, we can see the three rallies since July (look for the "7" on the chart).
The chart shows a potential upside price target of around $642 but we can also see that there is a "pocket" below the price action from $520 to around $500 where there does not seem to be much support (volume by price bars and short or absent). 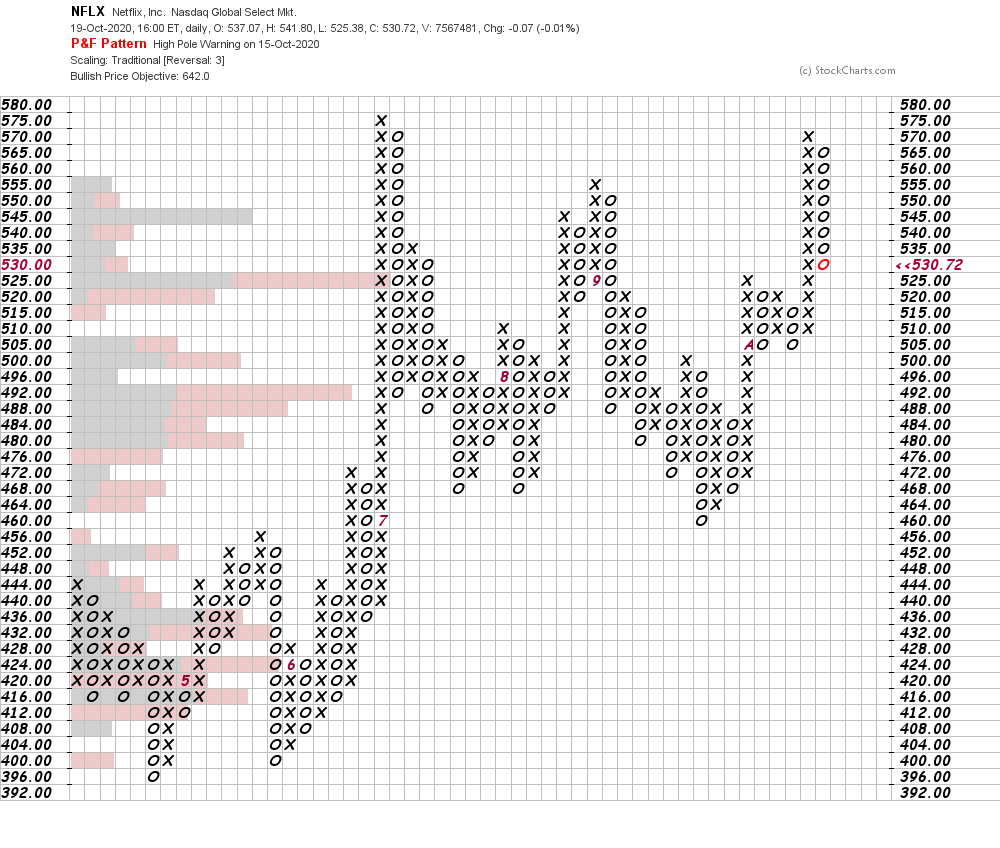 Bottom line strategy: NFLX has been in this sideways trading range since July and beneath the surface the indicators look like they have weakened. The path of least resistance could be lower if I have interpreted the indicators correctly. Remain cautious.
Get an email alert each time I write an article for Real Money. Click the "+Follow" next to my byline to this article.
TAGS: Investing | Stocks | Technical Analysis | Trading | Movie Production | Movies | Television Production/Distribution | Mad Money | Coronavirus