This date in history: 18 May 1910... Halley's Comet passes close by, "brushing" Earth with its tail. Panic was widespread. Scientists warned that the atmosphere would be impregnated with cyanogen gas that would snuff out oxygen reliant life on the planet. Anti-comet pills, and anti-comet umbrellas became all the rage. Gas masks became best sellers... four years prior to the "Guns of August" ever being fired. We sure have come a long way. Sure have.

The question across Wall Street has been, since Thursday's bullish reversal... Could equity markets confirm at least a short-term change in trend, or a tradable, if not investable bottom? Now, remember, while confirmation is necessary to broadly put more capital to work and bring down these overweight cash levels, confirmation does not guarantee a darned thing. That said, you can talk the talk, but not walk the walk without it.

On Tuesday, 10 of the 11 S&P sector-select SPDR ETFs traded higher for the session, with only Consumer Staples (XLP) closing below sea level at -0.69%. All 10 of our winners managed to somehow gain more than 1% on Tuesday, with five friendly spiders scoring runs of 2% or more. Technology (XLK) led sector performance, at up 2.9%, but that performance was quite uneven. While the Dow Jones US Software Index rallied an ordinary (for Tuesday) looking 1.81%, the Philadelphia Semiconductor Index roared 5.02% higher. The semis were led by Advanced Micro Devices (AMD) , which ran 8.73%, and semiconductor equipment providers KLA Corp (KLAC) and Lam Research (LRCX) . Those two were up 6.34% and 6.18% in that order for the six and a half hour session.

AMD's daily gain was inspired by Piper Sandler's five star rated (by TipRanks) analyst Harsh Kumar (opinion: Kumar is not just a five star, he is elite among five-stars) who upgraded that name from "neutral" to "overweight" while increasing his target price from $98 to $140.

Winners beat losers at both the NYSE and Nasdaq market site by a rough 3 to 1. Advancing volume took an 84.1% share of composite NYSE-listed trade, and a 79% share of Nasdaq-listed trade. Here's where it gets tricky. Aggregate trading volume increased by 9.7% on Tuesday over Monday for NYSE-listed stocks, Aggregate trading volume increased a tepid 3.6% on Tuesday over Monday for Nasdaq-listed names. A robust rally on elevated trading volume? That's what we needed to see.

By the book, that's what we were granted. Aggregate trading volume increased day over day for constituent members of both the S&P 500 and Nasdaq Composite as well. The thing is that the increase in trading volume is just that.... day over day. Total shares changing hands have actually printed well below last week's levels both on Monday and Tuesday of this week. I am going to go out on a limb here. Being that the highest volume day of last week was the reversal day itself, and the lowest volume day since was Monday's down session sandwiched by two higher-volume winners... I believe that markets are at least trying to go through the process of bottoming. Right here. Right now.

Obviously, none of the issues that got us here have been effectively resolved. Inflation is too hot. Supplies are scarce. The fiscal sugar dump is over. Monetary policy is only tightening from here. China still struggles economically with Covid. The Russian army is still where it does not belong, damaging global markets for energy and agricultural commodities.

What do I think? Is this attempt to form a bottom real? Every attempt is real, some of them just fail. That's why I trade more than invest at times of increased volatility. That said, Mr. Market has my attention. You don't have to pick the bottom if a change in trend holds. Remember that. If it's real, you'll catch up, unless this trading/investing thing just isn't your game. I told you last week that I was adding to names that I believed in on weakness. One of those names was Walmart. Boo. Hiss. One of those was Advanced Micro Devices. Therein lies the story. The story of trading these markets in Spring of 2022.

Recession? What recession? I don't remember calling a recession (Yes, I do). On Tuesday, in spite of mixed messages bandied about by a bevy of Fed officials , a couple of key April macro-economic data-points printed at better than expected levels, and really made the US economy look stronger than I thought it was.

First, the Census Bureau put April US Retail Sales to the tape. Headline Retail Sales gained 0.9% month over month, while core retail sales (ex-vehicles) popped 0.6% m/m. Strength was visible in vehicles and parts, electronics & appliances, miscellaneous store retailers, department stores, and non-store (internet) retailers, as well as at food & drinking places. In other words, the folks spent dough that they either had saved up, or moved out on the leverage scale, but they did spend. Gasoline stations suffered a 2.7% m/m decline. Grocery stores also printed in negative territory.

Are folks moving away from the most costly goods as inflation stays sticky? Looks like it.

Forty-five minutes later, the Federal Reserve published April US Industrial Production. Here as well, the results were quite strong. The total index popped 1.1% month over month as capacity utilization hit 79%, which is a level not touched since March of 2015. Slicing and dicing these results, manufacturing production stayed hot for a third consecutive month, mining production printed excessively hot for a second consecutive month, and utilities production halted a two month losing streak with a very strong print.

In response, the Atlanta Fed's GDPNow model for Q2 moved from growth of 1.8% (q/q SAAR) to growth of 2.5%. April Housing Starts will also move the needle in just a few hours.

The Fed was out and about on Tuesday, and while there were ominous warnings, from the Fed Chair in particular, that forced bond traders to sell the entire US Treasury curve, flattening said curve, equity traders appeared at least for one day to be impervious to Fed speak.

"Restoring price stability is a nonnegotiable need. It is something we have to do. There could be some pain involved."

"I would say there is no disagreement really. It is a challenging task, made more challenging the last couple of months because of global events. It is challenging because unemployment is very low already and because inflation is very high."

"What we need to see is inflation coming down in a clear way, and we're going to keep pushing until we see that."

"In the hall of mirrors aspect of monetary policy, even though we've barely lifted our pinkie finger here, we got a lot of market pricing already and so the tighter policy is already in markets."

"Given the current strength in aggregate demand, strong demand for workers, and the supply-side improvements that I expect to be coming, I believe a modestly restrictive stance will be consistent with a growing economy."

While there is no doubt that the Fed Chair was about as hawkish as we have ever heard him on Tuesday, his crew seemed to, while certainly not dovish, try to temper that hawkish posture just a little. They have been blunt as a group, which is a positive. I find striking the stance taken by James Bullard who had aggressively called for a 75 basis point hike going into the May policy meeting. Bullard has not really backed off, but he did not dissent when the FOMC moved on a 50 basis point hike two weeks ago, and he sounded on Tuesday, almost as if he is fine letting financial markets do much of the work for the committee.

Last week's additions to AMD coupled with rallies both on Friday and Tuesday have vaulted the stock to number one on my book in terms of weighting. AMD now comprises 6.3% of my entire single equity exposure which I am uncomfortable with. I am likely to take some profits on Wednesday in order to bring that weighting back down to something closer to 5%. This has nothing to do with my feelings for the company or for the job that Lisa Su is doing. She remains my favorite CEO. I was just a bit ahead of Kumar on this trade and fortunately for me, he carries far more influence than I do. 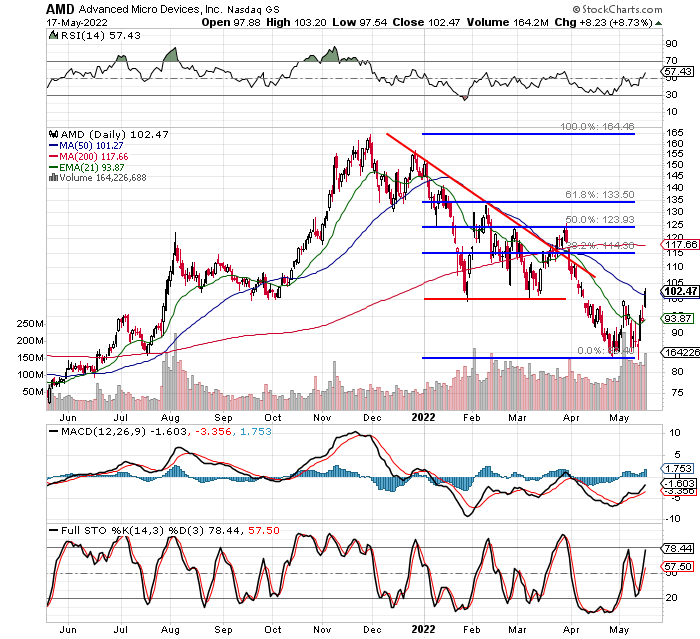 Remember this chart? If you read me often, you saw it two weeks ago. I told you then that I did not have a panic point, which was a good thing because the stock was trading with a $94 handle at that time, but traded with an $87 handle last week. I told you then that I saw the 50 day SMA as pivot. The 50 day SMA stood at $105 then, it stands at $101 now. That line was taken on Tuesday, as the stock remains nowhere near being technically overbought. Should pivot hold, my conservative target price moves to $121, with an eye still on $126 more aggressively.

(WMT, AMD and CSCO are holdings in the Action Alerts PLUS member club. Want to be alerted before AAP buys or sells these stocks? Learn more now.)

Get an email alert each time I write an article for Real Money. Click the "+Follow" next to my byline to this article.
TAGS: Economic Data | Federal Reserve | Interest Rates | Investing | Markets | Stocks | Technical Analysis | Trading | Semiconductors & Semiconductor Equipment